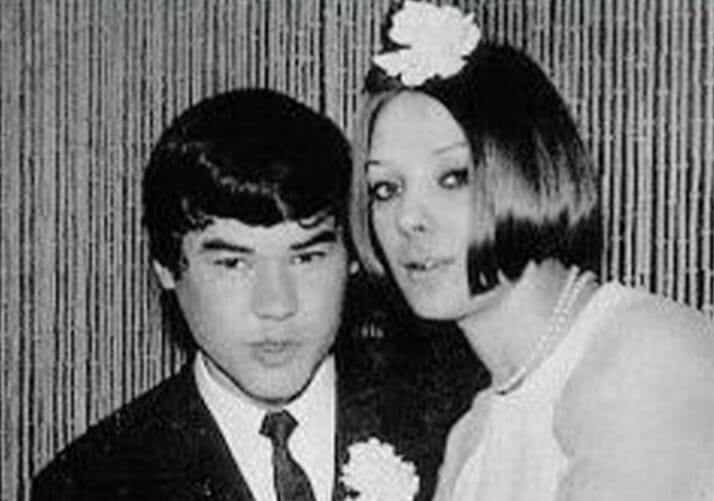 Despite working hard to maintain his privacy in a celebrity-obsessed cultural landscape, word of Keanu Reeves’ troubled history gradually leaked out into the press, painting such an astoundingly somber picture of the actor’s life, it spawned the heartbreaking “sad Keanu” meme.

Granted, every one of us will experience heartbreak and grief throughout the years, but Keanu’s life seems hopelessly strung together by the kind of misfortunes others may only reckon with once or twice in all their days.

By all accounts, the beloved Hollywood star’s past is a braid of melancholia with tapering threads snaking all the way back to his early youth and first experience of trauma… his father.

Who Is Samuel Nowlin Reeves Jr?

Keanu’s father, Samuel Nowlin Reeves Jr. was an American of Chinese, Irish, English, Portuguese, and Hawaiian descent, and although he was an educated individual, specializing in geology, he often ended up on the wrong side of the law.

At 22, he was a fairly young man when he married English fashion designer Patricia Taylor. But this wouldn’t be the only life-changing event he would experience in 1964. That same year, the couple had their first child – Keanu.

Both milestone events occurred in Beirut, Lebanon, but the reason for Samuel’s presence there is somewhat of a mystery, one that Keanu himself is a little puzzled by, remarking once in an interview:

I actually don’t really know his story. I think it’s like he was in college and then left and then was in Beirut on the beach.

Bear in mind that, at the time, Lebanon was a relatively peaceful place, with Keanu describing it as

The Paris of the Middle East

One of Samuel’s first acts as a father was to give his newborn the traditional Hawaiian name, Keanu, which means “cool breeze over the mountains” in the native tongue, which I think we can all agree perfectly sums up the actor’s calm, aloof nature — So far so good, but things were about to get messy.

When Did Things Go Wrong For The Reeves Family?

Despite Samuel’s talent for selecting fitting names, he was not what you’d call a model father, and shortly after the birth of Keanu’s sister Kim (at this point the family was living in Sydney, Australia), the couple divorced.

The legalities behind the split are uncertain, as Keanu rarely talks about his parents (particularly his father), but we can assume Samuel’s subpar efforts as father played a significant role in the unraveling of the pair’s relationship.

With the divorce finalized, after a brief stay in New York, Patricia moved to Toronto, Canada, with her children, yet Samuel decided not to follow, instead moving to Honolulu, Hawaii, intentionally distancing himself from his children, a decision that would cause a familial rift as wide as the physical distance between them.

Patricia eventually remarried, providing Keanu and his kid sister Kim a stepfather in Paul Aaron, a theater director making waves on Broadway who would eventually move on to work on some huge Hollywood productions.

He was involved with the Chuck Norris classics; A Force of One and Octagon, and would eventually go on to co-produce one of Keanu’s earliest hits: Bill and Ted’s Bogus Journey.

The two remained close and after Keanu decided he’d like to pursue a career in acting, Aaron did all he could to help the aspiring Thespian, offering him an assistant role on a Hollywood production at the tender age of 15.

Did Keanu Ever See His Father Again?

With Samuel’s behavior leading to more and more run-ins with Johnny Law (or Keoni Law, if you’re looking for the Hawaiian equivalent) his son’s distaste for his way of life intensified.

Keanu reports only really knowing his father during his early childhood.

[I only knew him] up until I was six. Then I saw him occasionally when I would go to Hawaii on holidays. The last time I saw him was when I was 13.

Yet, even if Keanu doesn’t remember these trips too fondly, Samuel’s warm recounting of the time they spent on the Hawaiian beaches together shows that he very much enjoyed spending time with his son.

Occasionally the spray would wash over the shelf, and the water would rush around our legs, and I would lift him up and hold him really tight.

As the Keanu Reeves star was rising, his father was in an opposite and equal free-fall into the murk of delinquency, making the majority of his living by dealing illicit drugs. In 1992, he was arrested for possession of cocaine and heroin and subsequently struck with a 10-year sentence.

Despite being paroled after just 2 years, all of Samuel’s attempts to connect with Keanu fell on deaf ears, with Momilani Abrahams (Keanu’s grandmother on his father’s side) reporting:

He doesn’t want to know us anymore. He won’t take Sam’s calls for help.

In 1991, prior to the arrest, the actor would confide in an interview with Rolling Stone journalist Chris Heath:

The story with me and my dad’s pretty heavy. It’s full of pain and woe and fucking loss and all that shit.

And not long after, he was quoted by Woman’s Day as stating

I have no plans to see him now. Remember the ‘60s burnout guy? That was my father. He was a deadhead reject.

Being that Keanu Reeves is usually so level-headed, this interview marked an uncharacteristic break of composure, so it’s clear how much of a sore spot his relationship with his father really is.

And considering what horror lurked just over the horizon for Keanu, it’s no surprise that the two would never repair their tattered relationship.

The Reason Keanu Reeves Never Spoke To His Father Again

Just two years after his father’s arrest for possession and intent to sell, actor River Phoenix, Keanu’s best friend, died of a combined overdose of… any guesses?

Yep, that’s right, cocaine and heroin, the very same substances his father went down for dealing. Of course, his father had absolutely nothing to do with River’s death, but the symmetry was all too apparent to Keanu…

Drugs are truly evil. My dad dealt in death, and he deserves to rot in jail until his sentence is over so nobody can die from the drugs he sells.

Keanu would later mellow his responses when asked about his father, remarking in 2000 that his father’s absence impacted him “in so many ways,” and that he did not have a relationship with Samuel “at this time”, a rather open-ended statement that held a glimmer of hope for the two.

What’s more, when asked about his father’s strife, he replied that:

It’s his life, man. I hope he’s well. Whatever that means … Leave him alone! Let him do his thing.”

Considering Samuel’s taking accountability for his failings in a ‘95 interview with Woman’s Day, stating:

I’m not very proud of myself as a father, but I am proud of my son. I hope we can reconcile so I can explain why he didn’t have a dad as a young boy.

Later in life, Samuel added that he was…

…embarrassed by it all. Keanu said my life was ‘tragic’ and, oh boy, does that hurt. Sad, yeah? I never figured things would end up this way, but he’ll always be my boy.

Samuel passed away in 2018, his friend reporting that his “dying wish was to make up with Keanu,” yet it’s rumored that neither Keanu nor Kim attended his funeral.

Despite Keanu’s life playing fantastical roles on the big screen, the kind of happy ending we see at the movies was never fated for him and his father, but there’s no telling whether the two would have reconciled had his father lived on.

We can only hope that Samuel’s passing provided some closure for Keanu; finally, all the turbulence and hurt between him and his father was in the past — A sad kind of relief.

To inject some positivity into what is a sad and unfortunate subject, have a look at this video from Motivation Mentors that shows why Keanu Reeves is such a beloved public figure.