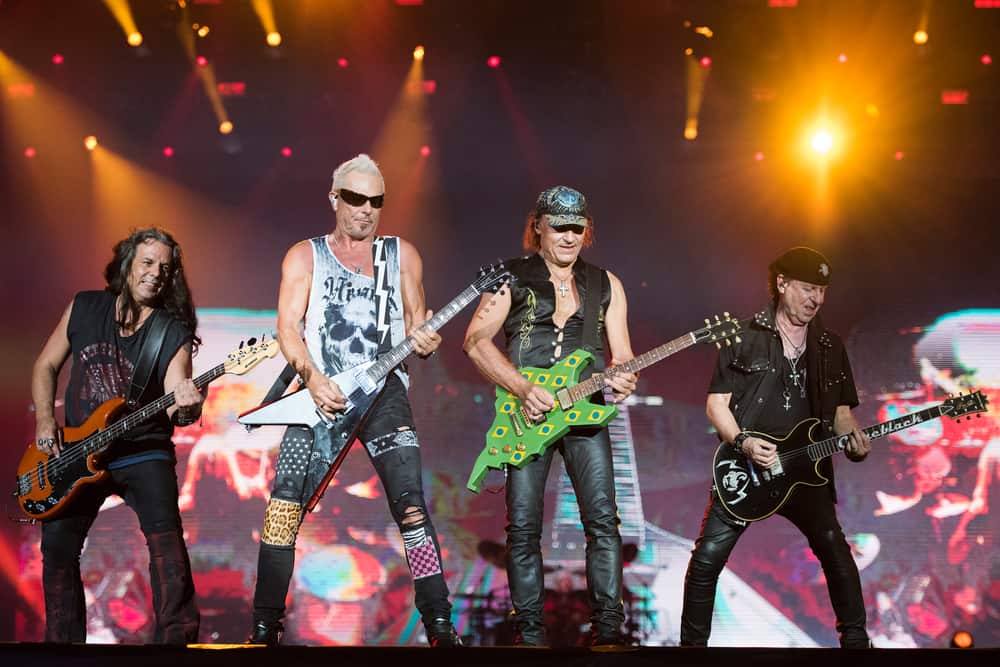 I think our music was never German, it’s always had this Anglo-American influence – we never tried to be a German band!

While it’s actually an anthem about peace and the fall of the Berlin Wall, the Scorpions groundbreaking single and globally famous song Wind of Change could have been written about the bands staggering fifty-five-year career.

During the five and half decades that they’ve spent wooing audiences all over the world and amassing record sales that would make the current media-obsessed darlings of the music scene seethe with jealousy, the Scorpions have seen and done it all.

Often referred to as the biggest German hard rock band of all time, Klaus Meine, Rudy Schenker, Matthias Jabs, Mikki Dee, and Pawel Maciwoda see things a little differently. They’ve always thought that they were an international band, and during the first decade and half of the band’s existence, they toured everywhere and anywhere they could, which led to them releasing one of the most widely revered live albums in hard rock history, The Tokyo Tapes.

With a breathtaking back catalog of riff-filled, anthem-packed albums to their name, trying to put together any sort of definitive Scorpions Top Ten is a Sisyphean task that no semi-sane individual would ever attempt to undertake. How could you narrow down such an incredible body of work to a mere ten Scorpions songs?

Attempting to do so would do the band, their fans, and the years they’ve dedicated to rocking stadiums from Berlin to Boston and Tokyo to Toronto a disservice that we’re just not willing to even begin to undertake.

So, we took a slightly different approach, and instead of trying to assemble the decisive Scorpions Top Ten, we thought we walk a different path and put together a Top Ten that’ll give you an insight into who the band is, and why they’re still, fifty years after they released Lonesome Crow, their debut album, one of the best hard rock bands in the world.

This is the Scorpions Top Ten that their fans want to hear, that’s made up of songs they still play live and the tunes that helped the Scorpions to secure their well-deserved place in the pantheon of hard rock royalty.

If anyone had told the band or their fans that they’d write and release one of the biggest rock songs of all time during the seventies when they were busy establishing their fearsome live reputation, they’d have tried to have whoever it was that said it committed to a psych ward.  But in the aftermath of the fall of the Berlin Wall, the band wrote, recorded, and released Wind of Change and changed its destiny and the way mainstream audiences viewed hard rock.

The song went on to become an international hit and the Scorpions first and only American Top Ten hit and while their die-hard fanbase is still divided about the song, it’s become an omnipresent part of their live set, and will almost certainly continue to be a part of it until they finally hang their guitars up at some point in the distant future.

Okay, so we’re focussing on the band’s slightly softer moments and their ballads, but as they tend to break up their shows with them, and they’re so good at writing them, it shouldn’t really come as any surprise that they’ve made an appearance.

Taken from the Love At First Sting album, Still Loving You is about, as guitarist Rudy Schenker once glibly commented, a doomed love affair. Driven by an emotive vocal performance from Klaus Meine and a haunting solo courtesy of Matthias Jabs, it’s a powerful, heart-rending tune that proved that the band didn’t, and don’t always have to crank their amps up to eleven.

If you mention the name Scorpions to any rock fan, they’ll probably start singing the incredibly catchy and infectious chorus to this hard-rocking monster of a song. Powered by a driving riff and another incredible exercise in fretboard wizardry from Matthias Jabs, Rock You Like A Hurricane was the first Scorpions single to crack the Billboard Top Forty and made an entire generation of rock fabs realize that there was more to rock’n’roll than the denim and leather-clad denizens of the Sunset Strip.

The third single from the band’s American breakout album, Love At First Sting, Big City Nights is a driving hard rock anthem that sees Klaus Meine trading vocal lines with Schenker and Jabs howling guitars and is one of those songs that’ll always make your heart pound a little harder and you drive a little faster whenever you hear it. It’s a bona fide rock’n’roll classic that, more often than not, pops up as a well-earned encore in every Scorpions set.

Written during the band’s first US tour in nineteen seventy-nine, The Zoo details the Scorpions experiences of New York City and the mind-blowing impression that it left on them. While it didn’t exactly set the charts on fire, it frequently features in Heavy Metal and Hard Rock Top One Hundred’s from all over the world and is beloved by fans and critics alike. And yes, it does use a talk-box. Frampton wasn’t the only rocker that could make that instrument sing.

The title song from the band’s sixth album, Lovedrive was another single that didn’t really achieve any sort of success in mainstream circles but did help to bolster their position among their rapidly expanding international fanbase.  And that powerhouse riff that the song is built around? It’s always amazed us that the band didn’t sue the people who made The A-Team because to our musically untrained ears it sounds like the television people lifted the themes wholesale from Lovedrive.

A real foot to the floor rocker, Blackout is the title track of the band’s eighth album and epitomizes everything that the Scorpions are about. An insanely catchy chorus is powered by even more insanely catchy riffs, and if we didn’t know better, we’d swear that this was the moment that the Scorpions swore their allegiance to the worldwide heavy metal sister and brotherhood.

We’ve already mentioned the band’s eighth record Blackout and how it laid the band’s love of heavy metal bare, and No One Like You just reinforces our belief in that theory. A power ballad of epic proportions that riffs its way straight into your heart, it hurtled into the Billboard Top One Hundred and went on to become a permanent fixture on hard rock radio stations all over the country.

Every band has a calling card, a statement of intent that immediately lets their audience know who they are and what they do, and He’s A Man, She’s A Woman is the song that the Scorpions have always used to bludgeon their audiences into submission with. The lead single from their fifth album Taken By Force it’s also one of the stand out tracks on their world-famous live album The Tokyo Tapes.

In nineteen seventy-nine, the Scorpions underwent a monumental shift in personnel when they replaced their former lead guitarist Michael Schenker(previously with UFO Band) with relative newcomer Matthias Jabs. The album that they released after Jabs joined them, Animal Magnetism laid down the musical blueprint that the band continues to follow to this day, and Make It Real is the perfect summation of that sound. It is, in our humble opinion, the greatest song that the Scorpions have ever recorded.

There you have it! Our top songs from this hard rock juggernaut. Do you agree? Feel free to drop a comment and give us your 2 cents, we’d love to know.