What Is The Meaning Of Stairway To Heaven: Led Zeppelin’s Amazing 1971 Musical Epic? 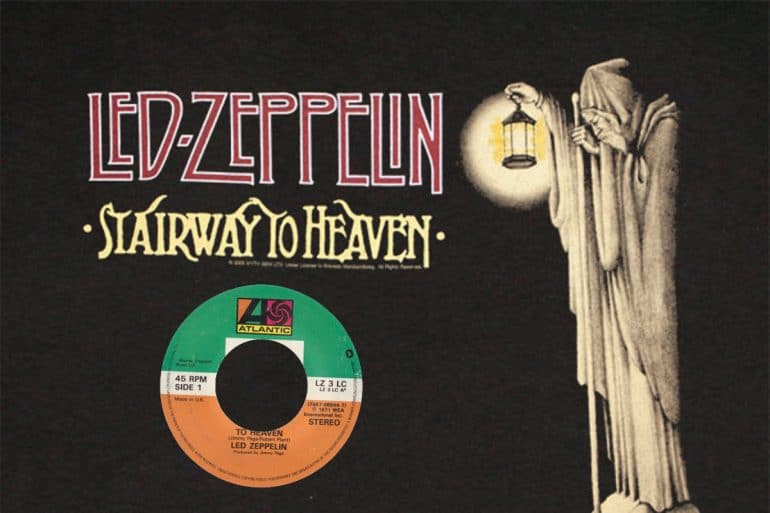 Depending on what day it is, I still interpret the song a different way – and I wrote the lyrics.

Stairway To Heaven by Led Zeppelin is one of the most expansive and twisting songs in the history of rock and roll. Despite its popularity and longevity, fans still debate over the meaning of Stairway to Heaven.

Like ‘Hotel California’ by the Eagles, the lyrics take an allegorical and narrative approach, creating scenes that are otherworldly, speak to our contact with the other, and indulge themes of drawing back the curtain within the mundane to reveal the ephemeral beauty of life.

As this metaphorical approach to writing wasn’t so common in mainstream music, often many people failed to interpret the song the way it was meant to, leaving many people wondering what Robert Plant’s medieval and epic lyrics are referring to outside of themselves.

Read on to learn more about the song.

The Compositional Skills Of Jimmy Page

One thing worth noting about this song, and other songs in general, is where they started. The eternal question that is asked of songwriters is whether they start with the music first, or the lyrics.

While this doesn’t necessarily have any bearing on the lyrics and their meaning it can help understand the origins of the song.

For Led Zeppelin, this song started with Jimmy Page, their lead guitarist.

He talks of how he originally wanted a song that was constantly changing and evolving, and that started with a medieval, pastoral-esque, acoustic guitar section that would constantly build and change into an almost orchestral crescendo of passion, emotion, and music.

The way that Jimmy took the music through, and the way the drums almost climaxed and then continued… It’s a very beautiful piece.

Page said that once he had the main parts of the song worked out in his head and on the guitar, Plant started writing the lyrics while they were playing and suggested 90% of the lyrics he wrote in that session were the ones that were used on the album.

Undoubtedly, this compositional approach will have affected Plant’s lyrics as he writes while he listens. The lyrics also reflect this kaleidoscopic and ever-changing piece of music.

The Use of Allegory Of Robert Plant

An allegory is a literary device that is used more commonly than most people realize. It is used by a writer to create a narrative that is both metaphorical and all-inclusive, it is a story that prompts a reflection on other topics beyond what is literally mentioned in the story.

For example, The Jungle Book is not a reflection on animals and the jungle, it is a reflection on identity and how it is formed, but Rudyard Kipling doesn’t explicitly mention this, rather, he uses another story to prompt this reflection.

Rather than literally explaining something to an audience, an allegory helps them understand a topic through feeling emotion. Though this can make it challenging to determine the meaning of Stairway to Heaven.

This is very much something worth keeping in mind with Plant’s lyrics.

While the story literally tells the story of a woman buying her way to heaven, the truth of the song will lay behind how you interpret these images, which is ultimately decided by your own perception of the images. Just as Plant says in the song:

Duality, The Other And The Stairway To Heaven Meaning

The duality that Plant paints in this line is what colors the song’s lyrics with an openness that frees up interpretation and thus meaning.

Duality is a theme throughout the song, the woman seems caught between choices, evidenced in the line ‘Yes, there’s two paths you can go by, but in the long run there’s still time to change the road you’re on.’

The woman starts the song sure of the way things are but slowly as the curtain is drawn back and she experiences ‘the other’ she realizes what she once thought was true is perhaps not so concrete.

Did you know your stairway lies on the whispering wind?

This experience of the ‘the other’ is something that permeates the domestic lives that Page and Plant were from, and is a continuing theme when it comes to the meaning behind Stairway to Heaven.

Both come from a traditional and domestic background in England where they will have been expected to follow a certain narrative in their life by getting ‘normal’ jobs, going to church on a Sunday, and all the domestic obligations we all face in our own lives.

Both writers of the songs chose the ulterior route, they became rock stars who make music for a living, often embracing alternative spirituality through their music, being surrounded by psychedelics and the counterculture of the 1970s.

Plant seeks to show the listeners that there are other ways to source happiness, legitimation, and meaning in our lives, that once we move from innocence to experience we can change for the better.

To embrace the fact that there is duality, and that nothing is certain or definite can free our minds to make a choice that is true to ourselves.

To accept that everything is singular, and there is only one way, is to be statistics and accept that nothing will change; ‘When all is one and one is all, that’s what it is to be a rock and not to roll.’

Final Thoughts On The Meaning Of Stairway To Heaven

Both Plant’s lyrics and Page’s composition embrace the theme of aporia. Aporia is a Greek term that speaks to the constantly changing and irresolvable nature of meaning, that nothing is specifically true rather it is constantly oscillating and changing.

Meaning is not flat like a coin, with two sides, but is more like a sphere with no axis: constantly changing, oscillating and with infinite dimensions. Just like Page’s composition.

Plant’s lyrics compel us to embrace things we don’t know, to draw the curtain back in our domestic lives and understand that the narratives we follow in our lives aren’t necessarily going to lead us to truth so we should embrace alternative narratives also.

It is interesting to note that Robert Plant does not rate the lyrics of Stairway to Heaven as highly as his fans do, in a recent interview with Dan Rather he stated:

I think as time goes by, you might find another period of your life with more substance…

Which brings us back to the beginning, who infers meaning? The Artist or the Audience? When it comes to the ultimate meaning of Stairway to Heaven, we will let you decide.

For a bit of insight from the man who wrote the lyrics, check out this clip from the legends over at Red Carpet News TV.

Who Wrote Stairway To Heaven?

Stairway to Heaven was written by Jimmy Page (music) and Robert Plant (lyrics) from the band Led Zeppelin.

When Was Stairway To Heaven Released?

What Album Was Stairway To Heaven On?

Did Led Zeppelin Copy Another Song For Stairway To Heaven?

The opening acoustic guitar on Stairway to Heaven, bears a resemblance to the song “Taurus” by rock band Spirit. This lead to members of Spirit filing a copyright infringement notice against Led Zeppelin in 1997.

The case went through several hearings in multiple courts until it reached the US Court Of Appeals, which ruled in favor of Led Zeppelin on the 9th of March 2020.

What Is The Forbidden Riff?

The forbidden riff is an urban legend in the music scene. It refers to segments of music that are banned from being played in guitar stores due to their popularity.

Stairway to Heaven is not actually banned from guitar stores. The joke, while probably as old as guitar stores themselves, increased in popularity after it was featured in the hit movie Wayne’s World.

How Long Is Stairway To Heaven?

Stairway to Heaven clocks in at almost 8 minutes long.