Rocks Off Magazine is reader-supported. When you buy via the links on our site, we may earn an affiliate commission at no cost to you.
Home
Uncategorized 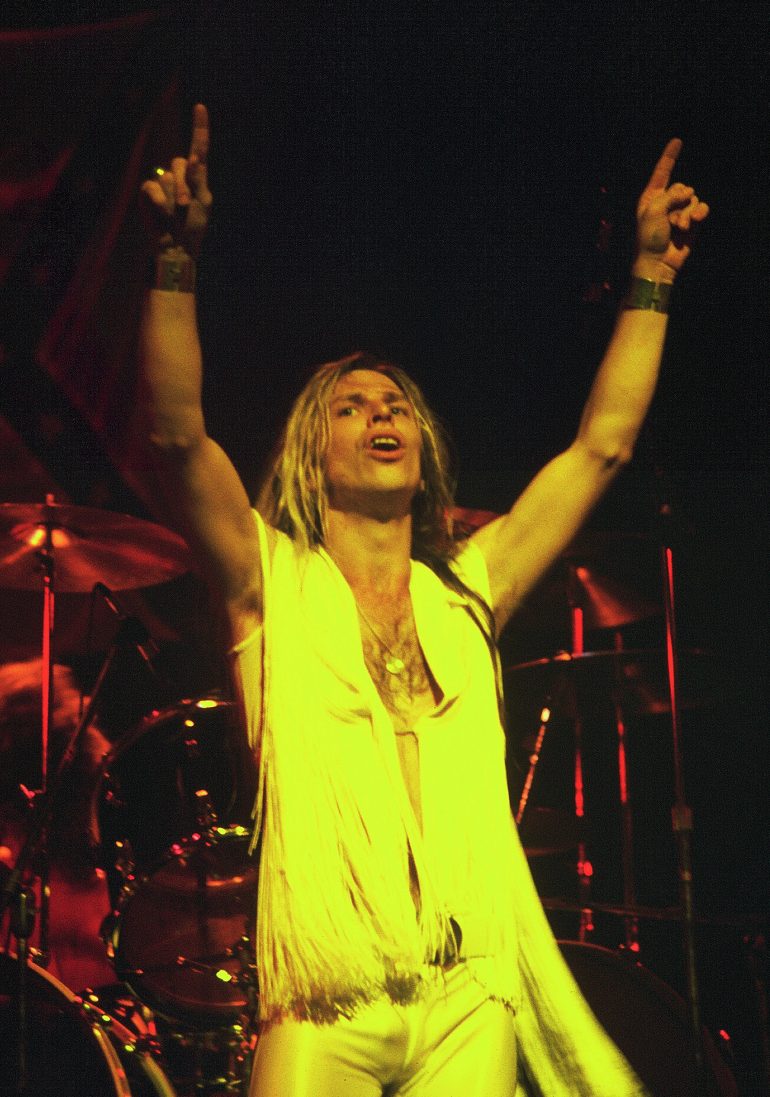 I never went to college, I went to the school of hard knocks and paid for my education by getting ripped off. It’s been a great adventure and I’ve outlived my adversaries.

Tradition is important in Rock ‘n’ Roll. There’s a list of do’s and don’ts as long as the devils forked tail, and all too often the bands that have fallen foul of any of them, have felt the wrath of the Rock Gods and been caught in inescapable clutches of the black cloud of misfortune.

But as important as tradition is to Rock ‘n’ Roll, it’s nothing when it’s compared to how crucial it (it, in this case, being tradition) is to Southern Boogie, or as it’s more commonly known in the North, Southern Rock.

When most folks think about Southern Boogie, the names that immediately spring to mind are Lynyrd Skynyrd, 38 Special, Molly Hatchet, The Charlie Daniels Band, or even the Allman Brothers. Black Oak Arkansas hardly ever features in anyone’s top five, which given how popular they were in their heyday seems a little strange.

They embodied the spirit of Southern Boogie and during the nineteen seventies were one of the hardest working rock and roll bands in America.

For some odd, and inexplicable reason, they have been consigned to the annals of rock ‘n’ roll history and seem to permanently languish in the ‘Where Are They Now?’ section of the record collections of even the most devoted Southern Boogie fans.

It wasn’t always this way though. There was a time when Black Oak Arkansas was one of the most notorious bands in the South, and whipped up, and played a storm wherever their crazy touring schedule took them.

They were one of the only bands to have ever truly earned the outlaw brand and toward the end of the sixties, they were actually sentenced to twenty-six years in the Tucker Penal Farm in their home state following an unfortunate incident with a PA (public address) system.

Evading the forces of law and order by retreating to rural Arkansas, after a period of living off the land and practicing day and night, when their sentence was finally suspended, they returned to their home town of Black Oak and decided after much introspection, to name themselves after the place they called home.

Led by charismatic, gravel-voiced frontman Jim “Dandy” Mangrum, it wasn’t until they left their home state in the rearview mirror following an abortive run-in with a record label and a debut release under their former name (The Knowbody Else) that wasn’t even available in most States and headed West to Los Angeles that things started looking for up for the fledgling band.

They ended up signing a deal with Atco Records who, legend has it, fell in love with the band after hearing their twin guitar assault and Dandy’s raw as sandpaper vocals, and a year later in nineteen seventy-one, their debut, self-titled record was released.

The first half of the seventies was the bands most prolific and busiest period as they toured relentlessly, clocking up more road miles in three years than most bands will in a dozen lifetimes, and between their debut album’s arrival in nineteen seventy-one and the signing with MCA Records in nineteen seventy-six, Black Oak Arkansas released a total of ten (including two live records and a collection of early Knowbody Else demos) albums, which only served to reinforce their reputation as one of the hardest working bands in America.

All good things must come to an end, and for Black Oak Arkansas, everything started going wrong when they jumped ship to MCA. Despite playing as many shows as they always had, and still giving one hundred and ten percent every single night, their record sales began to tumble and the line-up that had been through thick and thin, and evaded the forces of law and order together, finally fell apart in nineteen seventy-seven.

Never one to give in or give up, the man who inspired Dave Lee Roth to hit the stage, Jim ‘Dandy’ Mangrum, refused to let something like his band falling apart around him stop him from doing what he did best, and he promptly recruited new members and hit the road again.

While it’s almost impossible to accurately count the number of musicians who have played with Mangrum as part of Black Oak Arkansas since the seminal members of the band went their separate ways, most fans agree that the hard-working frontman’s band seems to have a revolving door membership that changes every time they blow through town.

Despite trying to adopt a more commercial sound in the late seventies, and even dropping the word Arkansas from the band’s name for a brief period to make them seem less “Southern”, there was nothing that Dandy could do to reclaim their former glory.

Even the harder, more riff-driven records that the band released during the eighties when Mangrum returned to live-action following a four-year layoff after being nearly paralyzed in a car accident that would have forced almost any other performer to retire, couldn’t revive Black Oak Arkansas’ flagging fortunes.

Still led by James Mangrum (or as most people still like to call him, Jim Dandy), Black Oak Arkansas is one of the hardest touring bands on the circuit, and even though they haven’t released an album in nearly a decade, they don’t need to.

Their back catalog speaks for itself and besides, when, and if, they roll through your town, you’re not going to want to hear the “new stuff” are you? Nobody ever does and Mangrum has been doing this long enough to know that when the lights go down and the amps are fired up, all that any of us want to hear are the classics.

Jim Dandy’s ready… are you?

The refrain sounds kind of familiar doesn’t it?  Don’t worry, you’ll get there, everybody does and when you do you’ll barely believe it.

But let’s put it this way, the royalties that Jim has earned from this live favorite from BOA’s sixth album Street Party have ensured that he only ever has to do what he wants to for the rest of his life.

2. When Electricity Came To Arkansas

It wasn’t just Jim playing the washboard that made this BOA classic famous, it was the fact that it served as the blueprint for the whole backmasking Satanic messages on records controversy of the nineteen-eighties.

It’s true that Jim Dandy might have stoked those fires a little when playing it live, but controversy aside this tune from their self-titled debut has been a staple of BOA’s live set for the last fifty years.

Even though it appeared on nineteen seventy-three’s Raunch ‘N’ Roll Live, the studio recording didn’t make its presence felt until it materialized on two thousand and thirteen’s Back Thar ‘N’ Over Yonder, which collected a number of the bands previously lost outtakes and rarities.

Playing on the South’s love of fast cars, this innuendo-laden hard-rocking tune is equal parts boogie monster and funk beast and proves that there was always more to BOA than a louder than a housebound Hemi live show.

Spend more than five minutes with Hot Rod and you’ll feel the same way that every other BOA fan does about the song. You won’t be able to live without it…

Even though the band has been playing this tune to the faithful for nearly half a century, the only way you could hear it outside of a club until Back Thar ‘N’ Over Yonder was released was by spinning a copy of nineteen seventy-three’s Raunch ‘N’ Roll Live.

Don’t be fooled by the title, this song isn’t an amped-up, steroid-infused rocker, it’s a country-flavored stomper that pulls in a sprinkling of Allman Brothers magic, and stamps its mark on your soul with more than a little soul of its own.

There was always far more to Black Oak Arkansas than Mangraw’s outrageous stage persona and commanding voice, and Up captures one of those all too rare moments when the rest of the band let it all hang out and deliver one of the most feverish, jaw-dropping instrumental jams in the history of Southern Boogie.

Put your foot down and ride the moonlight with Black Oak Arkansas, as they tick every box in the Southern Boogie checklist with Full Moon Ride which puts the hammer down and doesn’t let up for a second.

Full Moon Ride doesn’t hang around and doesn’t bother with convention, it just lets its dueling guitars and Jim Dandy do all of its talking for it.

It doesn’t pay to ever write BOA or Jim Dandy off, and Ready As Hell from the bands nineteen eighty-four comeback album that shared the same title as its lead single showed the world that they still had more than enough gas left in their tank to go toe to toe with bands half their age.

It’s heavier than their usual fare, so strap yourself in and get ready for a wild ride, and the fretboard gymnastics that power it toward its furious climax wouldn’t have been out of a place on a Van Halen record.

Black Oak Arkansas’ only hit single was a cover of LaVern Baker’s fifties soul tune, but in true BOA style, they amplified, electrified, and boogiefied it and transformed it into a hard-rocking leviathan that sounds every bit as good today as it when then band unleashed it on the world in nineteen seventy-three.

Some things, like the finest wines, just keep getting better with age. And Jim Dandy (To The Rescue) is one of them. “Go Jim Dandy, go…”

There you have it! Our list of the best songs from this hard-rocking Arkansas outfit!

Do you agree? Feel free to drop a comment and give us your 2 cents, we’d love to know.