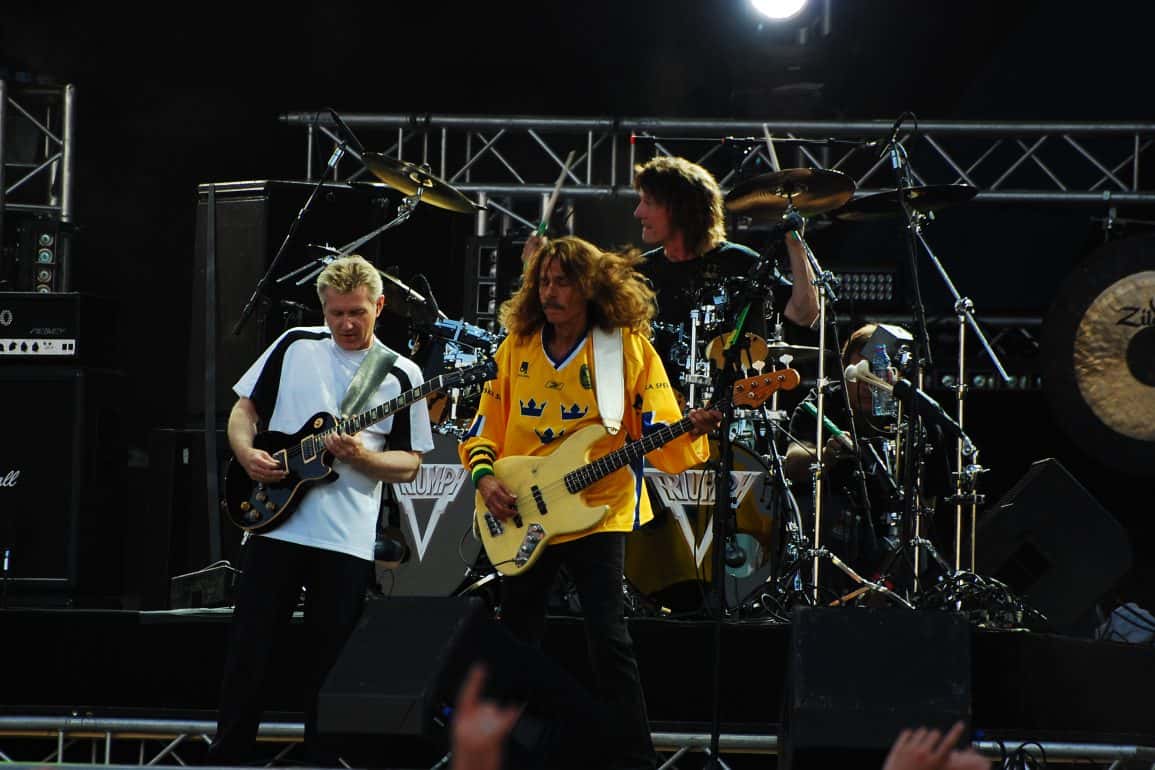 Our Top 10 List Of Triumph’s Greatest Ever Rock Songs!

Triumph band, not motorbike, are undoubtably one of the greatest Canadian rock exports to ever grace our ears.

Admittedly, with its high standard of living, rigid belief in equality and freedom for all of its citizens, and friendly, fair-minded approach to life, the universe, and everything, Canada isn’t the first place that springs to mind when you start daydreaming about screaming guitars, thunderous drums and anthemic, turbocharged hard rock.

In fact, it’s probably the last place that any of us would imagine has a rich and storied rock ‘n’ roll history. But it does, and while it might not churn out dime a dozen bands, Canada has produced more than its fair share of rock ‘n’ roll titans.

Unless you’ve been living in a shack in the middle of the desert in Nevada for the last four decades, you’re probably aware that Rush, Barenaked Ladies, Bachman Turner Overdrive, Sum 41, Simple Plan, the Tragically Hip, and more all emerged from the frozen North to conquer the world with riffs, rhythms and a couple of thousand infectious songs.

But, did you know that Canada had a secret hard rock weapon that they unleashed on America in the nineteen-eighties that converted over a million die-hard fans to its cause? It’s true, they did and that all-conquering hard-rocking weapon of mass conversion was called Triumph.

Formed in Ontario in nineteen seventy-five, Triumph was a band that earned their plaudits the hard way. By writing hugely memorable songs and playing more shows than any of the members could, and would, ever want to remember.

And all of their hard work and commitment to their hard-rocking fanbase paid off as the band had a total of eighteen gold and nine platinum awards for record sales and a plethora of other achievements to their name by the time they played their last show in front of a home town audience in two thousand and nineteen.

A far from conventional trio made up of guitarist and vocalist Rik Emmett, bassist Mike Levine, and drummer and vocalist Gil Moore, Triumph was always described by critics as inhabiting the middle ground between Journey and Rush, but that was, and is, an incredibly simplistic view of the band.

They were so much more than that, to so many people, and over the course of their ten album career, they went from playing the small, sweaty beer drenched clubs in which every band has to pay their dues, to headlining some of the biggest stadiums and arenas in the country.

They weren’t, as has already been mentioned, an overnight success story and it was their sheer determination, and belief that their talent as songwriters and performers would eventually take them to the top of the rock ‘n’ roll mountain that kept Triumph going.

By the time they tasted a modicum of success, they were already three albums into their career and had experienced the cruel hand of fate dealing them a bad hand on more than one occasion.

When they released Just A Game in nineteen seventy-nine, things began to change and their time on the club circuit came to a shuddering halt as they found themselves playing bigger and bigger venues with every release. Their albums began selling in hitherto undreamed of numbers, their videos found a home on MTV and VH-1 and their singles were played on radio stations everywhere.

All of their hard work was finally paying off and it couldn’t have happened to a more deserving band. Triumph had the songs, they played every show like it was their last night on Earth and never held back, and finally, at long last, the world had taken them to heart.

The critics might not have understood, or particularly liked them (Rolling Stone once called Triumph “faceless”) but their fans worshipped them and eagerly consumed everything they released and had previously released.

They were on an unstoppable winning streak, and for nine years they played like their lives depended on it, and made every show and every song count because they knew that at any moment, it could all come crashing down around them. And in nineteen eighty-eight, after the last show on the Surveillance tour, that was exactly what happened.

Internal strife and concerns about the direction that the band was heading in boiled over and Rik Emmett left Triumph. Despite Moore and Levine’s best efforts to replace Emmett and continue Triumph’s legacy, the chemistry just wasn’t there and they found themselves floundering and desperately trying to regain the crowd that the departure of their former colleague and friend had cost them. They tried and tried, but nothing worked and Triumph inevitably ground to a halt.

The funny thing about rock n roll though is that nothing lasts forever, and no grudge or argument can stop the desire to make and play music from manifesting itself and eliminating everything and anything that gets in its way. And in two thousand and seven, nearly twenty years after they last played their last show, the definitive Triumph line-up reunited.

They put their differences to one side and focused on the thing that had always helped them to overcome adversity and snatch victory from the jaws of defeat; music.

It isn’t all good news though, as while they’re technically still a band,  Triumph has only played two shows in the last thirteen years and there aren’t any plans on their collective radar to play together, any time soon.

Instead of playing to tens of thousands of people every night, these days they prefer to devote themselves to philanthropic causes and help those less fortunate than themselves, which somehow seems incredibly apt, and appropriate for a band who achieved the impossible and transformed mishap and misfortune into Triumph.

It seems kind of odd that the first song that brought Triumph to the attention of college and underground radio stations in the US was their cover of Joe Walsh’s Rocky Mountain Way from their second album Rock & Roll Machine.

And in case you’re wondering when Triumph did it their way, they made it sound better than Joe ever did.

Hold On was Triumph’s first US hit and the first single that was taken from their third album, Just A Game, and while it might not have sold the same sort of numbers as Bon Jovi did.

It managed to reach Number Thirty-Eight on the Billboard Top Forty and put Triumph on the American hard rock map.

The second single from Just A Game, Lay It On The Line was and is arguably a better and more memorable song, but for some reason, failed to achieve the same sort of chart-busting success as its predecessor did and only managed to just break into the Top One Hundred, and entered the charts at Number Eighty-Nine 4.

Fight, the first single from Triumph’s fifth album Allied Forces didn’t exactly set the charts on fire, but it didn’t have to, as it lit up college and rock radio stations across the country and helped to ensure that the album that it came from would go on to sell a million copies in America alone.

Triumph has always been a second single band, and Magic Power the second single taken from Allied Forces was again a better song than the previous single, and helped to push sales of the album that it was taken from higher and higher with its infectious riff led chorus.

He might not seem like an overtly political figure, but Rik Emmet always included at least one political song on every Triumph album and this hard-rocking powerhouse was his less than subtle political contribution to Triumph’s sixth album Never Surrender

All The Way is Triumph doing what they’ve always done best, playing anthemic, guitar-driven hard rock that doesn’t compromise and is built around a combination of a jaw-droppingly catchy chorus and incredible guitar work courtesy of Emmett.

More radio-friendly than All The Way, World of Fantasy which also appears on Never Surrender, was Triumph’s biggest US hit single and smashed its way into the charts at Number Two.

It was their finest moment up to that point and even managed to find favor with the critics who had previously decried the band.

Their biggest charting US single, Spellbound was Triumph’s calling card that drew new fans from all walks of life to their shows and made sure that Canadian hard rock became a permanent fixture on American radio for decades to come.

Triumph’s hard rock call-to-arms that captures everything that the band was, are, and will always be in three minutes, Follow Your Heart is one of the greatest rock ‘n’ roll songs ever written, and after you’ve spent an hour or two with it on repeat, you’ll become a lifelong Triumph fan.

There you have it! Our Top 10 list of the best songs from Canadian Rock Royalty!

Do you agree? Feel free to drop a comment and give us your 2 cents, we’d love to know. trdt