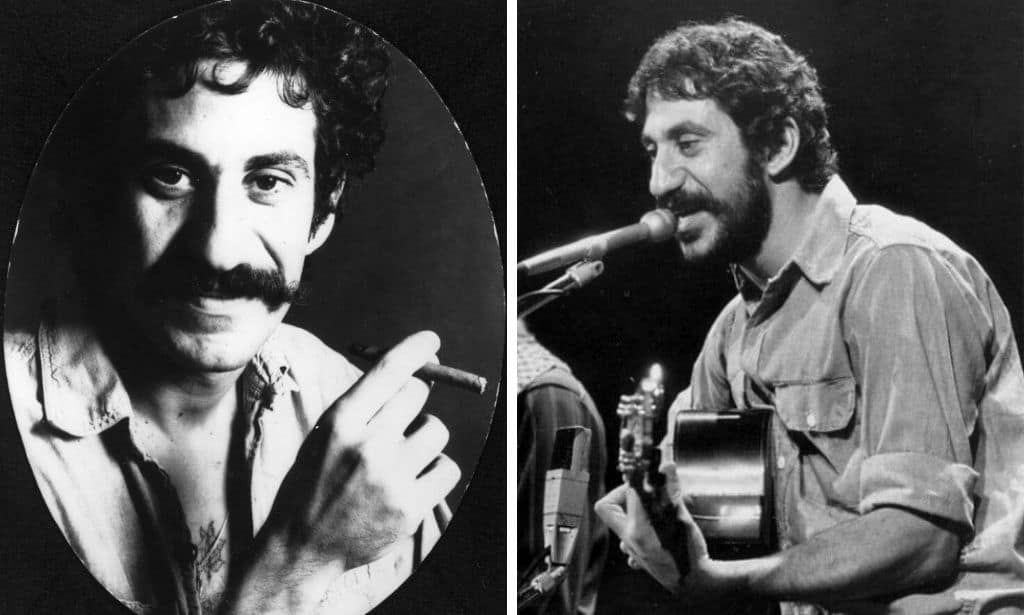 Our top 10 Jim Croce songs list delves into the music of a singer-songwriter that captured the hearts of many. He was excellent at writing lyrics related to personal stories, which reflected in his emotional melodies and powerful guitar playing.

The sad part about Jim Croce was his early death, leaving us with only our imaginations about what the future may have held for him musically.

A beautiful song from the B side of the single “You Don’t Mess Around With Jim.” The track details the reminiscing of an old love through photographs, the guitar playing is delightful and reflects the nature of the lyrics.

One of the most upbeat Jim Croce songs, “Rapid Roy (That Stock Car Boy)” will certainly get you on your feet. The song was released on his 1972 album You Don’t Mess Around With Jim.

One of the more unfamiliar Jim Croce songs, “Speedball Tucker” was released on his Life & Times album in 1973.

The charming and gentle ballad, “I’ll Have To Say I Love You In A Song,” is one of the most covered Jim Croce songs in his collection. It was released on his final album I Got A Name in 1973.

There weren’t many Jim Croce songs that he recorded but did not write, but this was one of them. “I Got A Name” was released in 1973 along with his fifth and final album of the same name.

5. One Less Set of Footsteps

“One Less Set of Footsteps” was released on the album Life and Times in 1973. The song is the album’s opening track and was also the first single released from it. The song peaked at the number 37 position on the Billboard charts.

5. Walkin’ Back to Georgia

“Walkin’ Back to Georgia” was released on his 1972 album You Don’t Mess Around with Jim. One of our favorite Jim Croce songs. It really highlights his brilliant guitar playing, his knack for a melody, and like all of his songs, a good personal story.

He apparently wrote this song on the evening he found out that his wife, Ingrid, was pregnant. She remembers a mix of fear and joy in Jim’s reaction to the news. It was released on his 1972 album You Don’t Mess Around with Jim. After his death, it was released as a single and reached number one on numerous charts around the world.

The song “Bad, Bad Leroy Brown” was released on his album Life and Times in 1973. A few months before Jim’s death, the track reached the number one spot on the Billboard Hot 100. One of the most well-received Jim Croce songs, it was nominated for a Grammy award in 1973 for the Best Pop Male Vocalist, however, he lost out to Harry Nilsson’s “Without You.”

2. You Don’t Mess Around With Jim

“You Don’t Mess Around With Jim” was released in 1972 along with his debut album of the same name. The track peaked at number 8 on the U.S. Billboard Hot 100 and spent a total of 11 weeks on the chart.

1. Operator (That’s Not The Way It Feels)

“Operator (That’s Not the Way it Feels)” was released as the second single from the 1972 album Don’t Mess Around with Jim. The single reached number 17 on the U.S. Billboard Hot 100 chart. The song is about a man trying to reconnect with his lost love, who left him for a friend, but ultimately changes his mind at the end.

We will never know how many more brilliant Jim Croce songs we would have provided he was given more time. We hope you’ve enjoyed our list of the top 9 Jim Croce songs.

Who Is Jim Croce?

“Country stuff like old Jimmie Rodgers, Fats Waller, Bessie Smith and a lot Dixieland. Well these are the kind of records that were around the house when I was a kid.”

Whilst attending Villanova College in Pennsylvania in 1964, Croce began playing music and started taking it more seriously. He formed numerous bands and played any gigs they could get. One of his college bands was invited to do a foreign exchange tour of Africa, Yugoslavia, and the Middle East. Jim recalls,

“We just ate what the people ate, lived in the woods, and played our songs. Of course they didn’t speak English over there but if you mean what you’re singing, people understand.”

After graduating college in 1965 with a bachelor’s degree in psychology and German, Croce worked on construction crews as well as taught guitar at summer camps. He joined the U.S. Army National Guard for a short stint and worked as a teacher at a junior high school.

On November 29, 1963, Jim Croce met his future wife Ingrid Jacobsen at a folk music party “hootenanny” at the Philadelphia Convention Hall. They were later married in 1966, the same year that Croce released his first solo album, Facets.

Croce financed the album with just $500, a wedding gift from his parents. His parents insisted that the money must go towards making the album, in the belief that the album would fail, and he would therefore give up on his dream. On the contrary, the album was a success, and he managed to sell all 500 copies.

Between the mid-1960s and early 1970s, Jim began performing with his wife, Ingrid Croce, as a duo. In 1968, Jim and his wife moved to New York City and began recording their first album together with Capitol Records.

Over the next two years, they traveled over 300,000 miles across the USA promoting their 1969 album Jim & Ingrid Croce and playing in local clubs.

After becoming embittered by the New York City music industry, they sold almost all of their belongings, except for one guitar, so they could move back to Pennsylvania.

“I moved to New York one time and never moved again. Things weren’t going right when I was living there but I just didn’t like the pace. I didn’t like the things I was doing.”

Earning just $25 a night playing music, Croce took on various jobs to make ends meet. Many of the jobs he worked would later form the background of his songs.

In 1970, Croce was introduced to Maury Muehleisen, a classically trained pianist-guitarist and singer-songwriter from Trenton New Jersey. They started playing together with Croce backing Muehleisen on guitar, although their roles later reversed, with Muehleisen playing lead guitar to Croce’s music.

From 1972 to 1973, Croce performed more than 250 concerts and made appearances on various television programs such as The Tonight Show and The Dick Cavett Show. In early 1973 he released a second album called Life and Times. The single from the album, “Bad, Bad Leroy Brown,” reached number one on the U.S. Billboard Hot 100 chart in July 1973.

On July 16th 1973, Jim Croce and Maury Muehleisen visited London and performed on The Old Grey Whistle Test. They played “Lover’s Cross” and “Workin’ at the Car Wash Blues,” both tracks from their forthcoming album I Got A Name.

Jim became severely homesick whilst touring and even vowed to take a break from music after the Life and Times tour ended. In a letter written to Ingrid Croce which arrived after his death, he detailed his decision to retire from music and step out of the limelight.

On September 20th, 1973, after finishing a concert at Northwestern State University’s Prather Coliseum, the plane destined for a concert in Texas crashed into a tree midst take-off. Jim Croce and all other passengers, pilot Robert N. Elliott, Maury Muehleisen, comedian George Stevens, manager and booking agent Kenneth D. Cortese, and road manager Dennis Rast, were killed in the crash.

Corb Donahue, a long-time friend of Jim Croce and employee at ABC Records, described him as “simply one of the finest human beings I’ve ever met.”