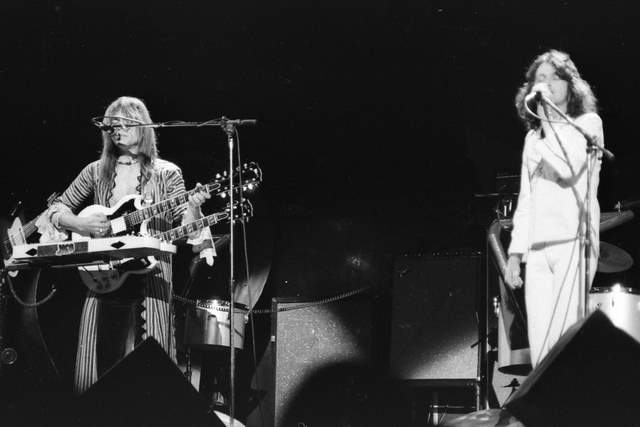 Some bands come and go in the blink of any eye, while others possess a creative power and longevity that allows them to burn brightly and change the face of music forever. Yes were, and will always be one of the latter bands.

Formed by their driving force and main composer Chris Squire in nineteen sixty-seven, Yes were at the forefront of the burgeoning progressive rock movement that defined and helped to shape the nineteen seventies.

They were the band that molded an entire generation and for more than four decades were a seemingly endlessly productive machine that refused to bow to convention or compromise, and did everything the Yes way.

Over the course of twenty-one celebrated albums (and album covers), they steered their own peculiar course through the often turbulent waters of rock and roll, and the path they followed was never easy, nor would they have wished it to be.

Beset by personal conflict and endless inter-band disharmony, they used the tempestuous and volatile relationships at their heart to focus and hone their innovation and musical imagination to generate an astounding legacy of intricate, powerful music that was as moving and immediate as it was complex.

They seemed to be unstoppable and no matter what life and the endless turmoil of the road threw at them, Yes soldiered on defiantly resisting trends and the ever-evolving face of the business they were so firmly entrenched in.

Yes made music for themselves and their devoted and always faithful audience, and their fans loved them for it. They were just as driven and passionate about the music they made at the end of their recording career as they were the first time they walked into a recording studio. And then in June two thousand and fifteen, Yes came crashing to a final, seemingly insurmountable halt.

Farewell To The King

Having survived a heart attack, a devastating addiction to cocaine, and after selling more than fourteen million records, the man who had always been the soul of Yes, their bass player and founding member, Chris Squire died a month after being diagnosed with leukemia.

He was sixty-seven years old. Struggling with the loss of their force Majeure, the surviving members of Yes, attempted to replace their fallen comrade, and while Yes still exists, only time will tell if they can, and will, ever make another record.

As a lasting tribute to the musical genius Chris Squire and the band he christened, we’ve put together a top ten of Yes album covers. Because incredible art, just like music is eternal…

Released in nineteen eighty-seven and was Yes’s twelfth studio album. While the sleeve’s artwork is often regarded as being utilitarian and bleak, it was based, according to designer Garry Mouat, on an idea that the band’s singer Jon Anderson had.

By the time Anderson told him what the “band” wanted, Mouat concluded, given the reaction of the other members when he tried to dissuade Anderson, that the design had already been the subject of furious debate within the Yes ranks. And that it was a debate in which Anderson had emerged as the clear and undisputed victor.

The band’s first live album, released as a triple record wrapped in a sleeve painted by the bands the long-time artistic collaborator Roger Dean continued the ethereal, science fiction theme that had become synonymous with Yes.

Recorded during the Fragile world tour, Yessongs is a platinum record that is still the bands selling live album. The sleeve is also famous for including the paw prints that Dean’s cat left behind when she walked over the still drying painting that her human had just created.

3. Going For The One

Released in nineteen seventy-seven was the first time in six years that Yes hadn’t directly collaborated with Roger Dean, Rejecting his design in favor of a new direction that was meant to reflect the bands desire to write more concise, direct songs it was a record that saw the band reborn with a new sense of creative purpose, and would later go on to directly inspire Def Leppard’s choice of art for their multi-million selling breakthrough alum Hysteria.

For their tenth studio album, Drama Yes once again turned to their former artistic partner Roger Dean, who had previously felt the bands ire and noted their change in musical direction that their music was taking, decided to abandon his usual fantasy and science fiction influenced style in favor of a more direct approach that was inspired solely by the record itself.

The first compilation album put together by Yes’s then-record label Atlantic and was the last time that Roger Dean would paint one of the band’s album covers until they brought him back in from the cold for Drama.

Stylistically and thematically it’s pure early Yes, and Dean’s work is as detailed and sumptuous as ever, but we can’t help wondering if Dean’s decision to work directly with the label rather than Yes had any bearing on the decision that left him high and dry for six years.

While it looks like it was part of Yes’ classic seventies heyday, Heaven & Earth was actually the band’s last studio album and was released in two thousand and fourteen. It’s the only Yes record to feature vocalist Jon Davison alongside Chris Squire.

The art seems to be indicative of Squire’s desire to return to an earlier Yes sound, but as it was the last album that he actually recorded with the band before he died, whether or not that would actually have happened is a question for the ages.

7. Close To The Edge

Was the band’s fifth studio album was the first to feature their classic logo that was designed by long-time Yes artist Roger Dean. The simple fading gradient of the art is meant to emphasize and accentuate the bands, then, new logo and the album title rather than drowning both in an overly elaborate and complicated illustration.

Yes’s seventh album and the first record that they released following the departure of Rick Wakeman, Relayer (released in nineteen seventy-four) is often referred to by the artist responsible for creating it, Roger Dean as his favorite Yes sleeve and the work that he was most proud of.

Yes’s fourth studio album and a direct interpretation by artist Roger Dean of the band’s mental state when they entered the studio to record it in nineteen seventy-one. It’s a barren image that belies the beauty of the music that it contains.

Yes’s sixth studio album, released in nineteen seventy-three, and is a near flawless representation of the band at the absolute pinnacle of their musical power.

There it is – that’s wraps our list of this Yes’s iconic album covers.

Do you agree? How would you rank them? Let us know, we’d love to hear from you!