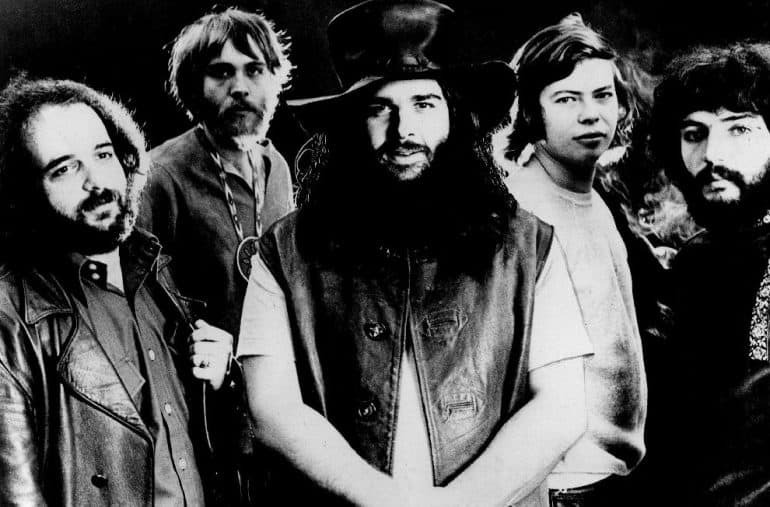 Our 10 essential Canned Heat songs list explores the music of one of America’s greatest boogie bands. Canned Heat was one of the first real hippie bands to gain popularity. They were formed in Los Angeles in 1965, primarily by Alan Wilson and Bob Hite.

The band was known for their bluesy style mixed with psychedelic funk. They had a large following during the hippie and psychedelic movement and played as one of the main acts on the second day of Woodstock.

While the band enjoyed moderate success well into the 1970s, their lead singer and songwriter, Alan Wilson, died in 1970 of an accidental barbituates overdose. Shortly thereafter, in 1981, Bob “The Bear” Hite died as well from a drug overdose.

With their deaths and the band’s continued substance abuse, the band took a downward turn. Although there have been various incarnations of the band over the years and into the present day.

This song appeared on their debut album and, like a lot of Canned Heat songs, is a remake of an old blues hit. The song was first recorded by Hambone Willie Winter in 1929 but the best know version was the one released by Muddy Waters. Canned Heat covered the song in 1967, and it was released soon after the band appeared at the Monterey Pop Festival.

This song was also recorded shortly after the Monterey Pop Festival. The band had found some success after playing at the festival as well as a few others. Another blues cover song from their debut album, it featured Bob “The Bear” Hite on vocals and a piano accompaniment by Ray Johnson.

This Canned Heat song epitomized their attitude in the late 60s and 70s. They were known as a hippie band that liked to use a lot of different substances. A handful of their songs reference these substances, either praising them or warning you about them, including in this one.

It was also about how hard it was to be on the road, missing the people you love. It was featured on the band’s Historical Figures and Ancient Heads album, which was basically a snub to people who didn’t resonate with the hippie counter culture movement.

This song appeared on the band’s third album, Living the Blues, a double album that featured a lot more original songs compared to the band’s other albums. Although the track didn’t reach great heights on the music charts, it was one of the first Canned Heat songs that were written by one of their own band members, Alan Wilson.

Another track written and performed by co-founder Alan Wilson, “Poor Moon” first appeared as a bonus track on the album titled Hallelujah. In comparison to other Canned Heat songs, the track held a deeper meaning. It discusses how the human race and the government are going to destroy the Earth, be it through pollution or war.

This was probably the band’s most recognizable cover song, made popular by none other than Elvis Presley. However, it was written in 1947 by an American Delta blues musician Arthur “Big Boy” Crudup. The song was recorded from the band’s live 1970 concert in Europe.

This song was originally written by Wilbert Harrison, but covered by Canned Heat in 1970. In the US, it reached No. 26 on the Billboard Hot 100, which, for the band, was a pretty high chart-topper. Unlike their previous singles, Bob Hite sang lead vocals instead of Alan Wilson. It’s one of those songs you don’t realize you know until you hear it, then you recognize it right away.

One of the most popular Canned Heat songs, this jokey song is about the dangers of amphetamine. It received a lot of radio playback in 1968. For a band that was known for dabbling in psychedelics, it was a bit ironic that they recorded a song like this. The lyrics of the song paints a vivid picture of just what popping those silly pills can do to a person.

“Going Up the Country” is one of the most famous Canned Heat songs and their biggest hit, peaking at No. 19 on the Billboard Hot 100 in 1969. Adapted from a 1920s blues song written by Henry Thomas, it became a “rural hippie anthem.” The band infused the original blues sound with their own elements, such as light electric guitar playing, a drum rhythm section, and Alan Wilson’s countertenor style vocals.

The first Canned Heat song that reached the charts, “On the Road Again” was also the title song of their biggest album of the same name. They adapted an earlier version of the song that had been recorded by Floyd Jones, a famous Chicago blues singer. The driving blues-rock boogie features Alan Wilson’s distinctive falsetto vocals.