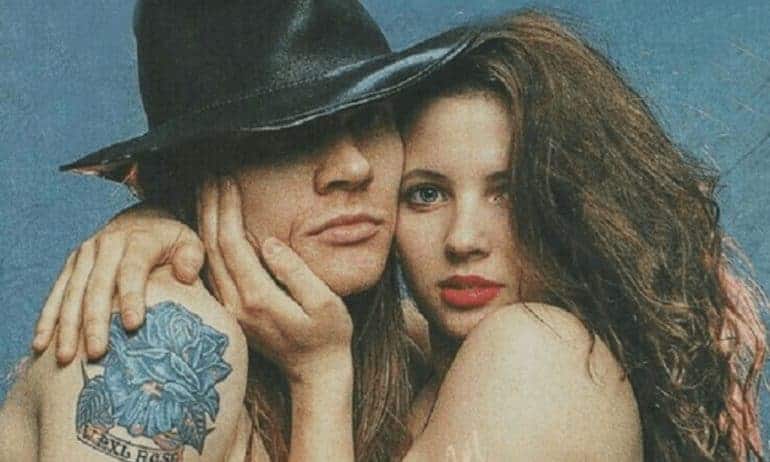 As many Guns N’ Roses fans know, Erin Everly was the girl featured in the “Sweet Child O’ Mine” music video. Erin Everly was also Axl Rose’s girlfriend and first wife, although they were only married for a short length of time.

Erin Everly was born in Los Angeles, California in 1965, making her three years younger than her former partner, Axl Rose. Her father was Don Everly, a member of the famous rock and roll duo The Everly Brothers.

Whilst her mother, Venetia Stevenson, was a British actress who later became a clothing designer. Erin’s parents divorced in the 1970s mainly as a result of Don Everly’s battle with drug addiction.

Fast forward to 1986 in sunny Los Angeles, Erin Everly met Axl Rose for the first time at a party aged just 19. After seeing each other for a while, she eventually moved to Los Angeles from New York to continue their relationship.

Marc Canter, a long-time friend of Slash who grew up together recollects Axl and Erin’s relationship.

“I remember when she first came around. She had a good job, was doing a little modeling and always had a little bit of money on her and took good care of Axl. Erin didn’t seem the type that would hang around with GNR. She looked like you know a step above you know like she didn’t look like a stripper.”

When the interviewer asked him what she thinks about this song, “Sweet Child O’ Mine.”

“I know she’s proud of the song I mean even to this day, I’m sure she’s proud of it. That song will always be attached to her and she’s in the video! She was in love with Axl and Axl was in love with her and they were a good couple. I’m sure every now and then they had fights or whatever and you know things like that happen in every relationship maybe and there’s was a little bit heavier, but when they weren’t fighting, they were a great couple.”

Erin Everly also featured in another Guns N’ Roses music video for the 1987 song “It’s So Easy.” Erin played a slightly raunchier role (to say the least) compared to her previous music video. The footage comprised mostly of S&M stuff between Axl and Erin but was unreleased at the time.

“Axl wanted to put in some S&M stuff that he shot with [ex-wife] Erin Everly, unbeknownst to me at the time; he quietly arranged this with Nigel Dick. When I went to look at the footage and sit with Nigel and start to get a basic edit on it, there was a lot of hanging Erin off the door, putting a ball gag in her, beating her and stuff.”

Four years after they had initially started dating, the couple finally got married on April 28, 1990. The couple exchanged vows during a wedding ceremony held at Cupid’s Wedding Chapel in Las Vegas. Allegedly, Axl wanted an annulment only 48 hours after the marriage!

Four months after the marriage, Erin Everly lost her baby due to a miscarriage, largely contributing to the breakdown of their relationship.

Around the same time as the miscarriage, the famous bottle incident happened with Axel’s neighbor. Which eventually led to part of the inspiration behind the song, “Right Next Door To Hell.”

Their marriage eventually ended 10 months after the Las Vegas wedding. When talking about their relationship, Axl Rose stated, “Erin and I treated each other like crap… Sometimes we treated each other great, because the children in us were best friends. But then there were other times when we just messed up each other’s lives completely.”

Their abusive and wild relationship was not unknown to friends and those around the band. According to Rolling Stone, the band Great White used a recording of Erin Everly defending herself from punches thrown by Axl Rose on their 1992 Psycho City album.

In 1994, People Magazine published an article about Axl’s abusive relationships with ex-wife and previous girlfriend Stephanie Seymour. The latter with which he was involved in a lawsuit at the time, where they both ended up successfully suing each other. That’s Hollywood for you!

In March of 1994, Erin Everly initiated her own lawsuit against Axl Rose. She claimed that he had subjected her to physical and emotional abuse. Along with claiming that he had frequent bouts of unpredictable rage. Axl claimed otherwise and the lawsuit was eventually settled outside of court.

After the release of the Chinese Democracy album, Axl talked about the song “Oklahoma,” which was inspired by the court case with his former wife and the Oklahoma City bombing.

Where Is Erin Everly Now?

After her divorce with Axl Rose, Erin Everly ended up dating some well-known celebrities including David Arquette, Anthony Kiedis from the rock band the Red Hot Chili Peppers, Donovan Jerome Leitch who is the son of the singer-songwriter Donovan, Matthew Nelson, and Matthew Klyn.

In 1997, she ended up marrying Jack Portman, whom she has three children within his hometown of Atlanta. In 2006, the couple ended up divorcing and in 2010, Erin Everly was arrested for domestic violence. She was arrested for attacking Matthew Klyn with a knife.

From the Collection of Erin Everly

Rather bizarrely, in 2013 Rolling Stone reported that Axl Rose’s ex-wife was selling love letters and their wedding video from 1990. The auction included candid photos of Axl Rose, some of which were from his childhood, letters from Rose that he wrote to her, handwritten song lyrics, clothing he wore in music videos and even their marriage certificate.

All in all, Erin Everly has so far lived a rather wild existence. It seems wherever she goes, a tornado of trouble follows close behind.