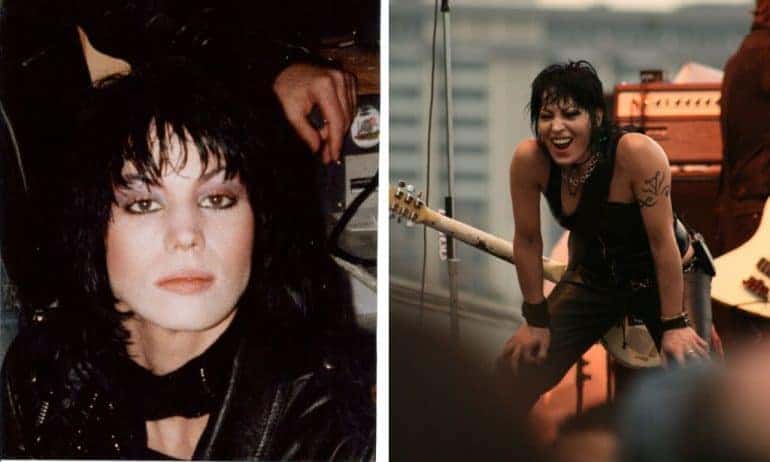 Our 10 essential Joan Jett songs list explores the music of the “The Queen of Rock ‘n’ Roll.” At a time when the music world was dominated by rock bands like the Ramones, Van Halen, Metallica, and Motley Crue, Joan Jett was setting the world on fire with hits like “Cherry Bomb,” “I Hate Myself for Loving You” and “I Love Rock ‘n’ Roll.”

From her early years as a founding member of the Runaways and frontwoman of her band Joan Jett & the Blackhearts, her heartfelt vocals and driving guitar playing have led to a plethora of rock and new wave inspired classics.

While Joan Jett wrote and performed her own music, she also recorded a lot of cover songs. One of her most popular covers was of Tommy James and the Shondells’ “Crimson and Clover.”

In comparison to the psychedelic original, Joan Jett & the Blackhearts created a unique hard-rocking punkish version. The song was released in 1981 and reached No. 7 on the Billboard Hot 100 in 1982, becoming the group’s second highest-charting hit in the United States.

Like “Crimson and Clover,” “Dirty Deeds” was another Joan Jett song that was a cover. It was released on her first cover album The Hit List in 1990. In her version of the song, she shortened the original title and took out “Done Dirt Cheap.” However, her song was just as dirty and gritty as the original. It was the female version of the bad boy song released by AC/DC just a decade earlier.

There’s a handful of Joan Jett songs that are about lust and sex. This was definitely one of them. She had been a fan of British glam rock singer Gary Glitter who originally wrote the song in the 1970s. She decided to do her own version of it and gloss it up with a bit of 80s flair.

Released in the summer of 1982, it reached No. 20 on the Billboard Hot 100. The track painted a picture of what was to come in terms of 1980s hair bands and the anthem style rock songs that would soon dominate the charts.

Most people became familiar with this song when it was released by The Everly Brothers in 1960. But like many great artists, Joan Jett decided to add her own rock spin to the iconic track when she released it on her 1990 covers album The Hit List.

Interestingly, former Rolling Stones guitarist Mick Taylor played the guitar solo for the song. The track peaked at No. 8 on the Billboard Hot 100 and earned Joan Jett & the Blackhearts a Grammy Awards nomination.

This was one of the rare songs by Joan Jett that really tells a story through the lyrics. It’s a tale of reckless youth, being in the wrong place at the wrong time, as well as the anti-establishment attitude she so strongly expressed throughout her career. Released on side two of her most successful album I Love Rock ‘n Roll, it’s a song to be sure not to miss out on.

This was one of the first Joan Jett songs that became a music video for MTV, having just become popular in the late 1980s. It was one of her first collaborations with her newly acquire producer, Kenny Laguna, and what a good one it was.

If there’s any song that is emblematic of where Joan Jett fits into the rock ‘n’ roll scene, it’s this song. It was one of the band’s true hard-rocking hits and one of our favorite Joan Jett songs of all time.

Kenny Laguna in a Songfacts interview recalls the inspiration behind the track:

The only Joan Jett song on our list from when she was with her first band the Runaways. The song was composed by Joan Jett and the band’s then-manager, Kim Fowley. Although the lead vocals on the original version were sung by Cherie Currie, Joan Jett later re-recorded the track in 1984.

But the original is far superior, the power of Cherie Currie’s 16-year-old voice and the band’s overall teenage attitude creates a hard-rocking punk-influenced anthem that became their signature track. It would go on to define how Joan Jett would present herself musically to the world just 5 years later, with a bang!

Probably the most well-known of all Joan Jett songs, and a staple in karaoke bars, the song was actually originally recorded by the British group The Arrows in 1975. When touring in England with the Runaways, Jett heard the song and wanted to record it. The other members weren’t so interested and passed it up, what a mistake that turned out to be.

After recording a version in 1979 with Paul Cook and Steve Jones of the Sex Pistols, Jett recorded the chart-topping version in 1981 with her group the Blackhearts. The track reached No. 1 on the Billboard Hot 100 where it spent seven weeks, becoming one of the biggest singles of 1982.