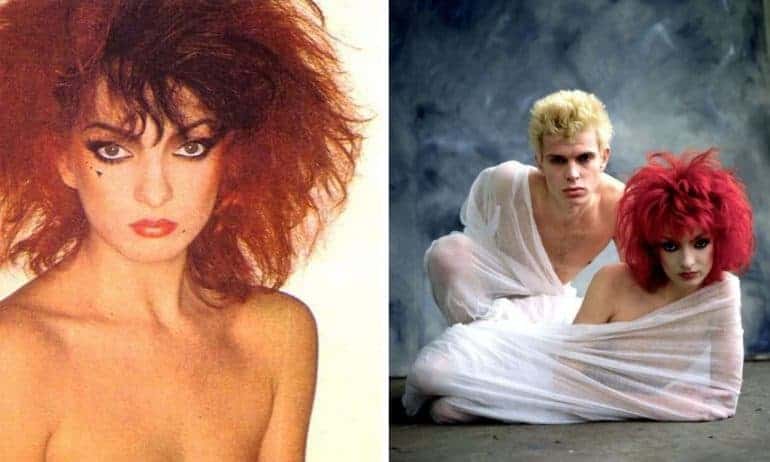 If you have ever seen episodes of the old English comedy show The Kenny Everett Video Show from the late ’70s and early ’80s, or if you have seen Sarah Brightman’s ultra-camp music video for her single “I Lost My Heart to a Starship Trooper,” then you have seen Perri Lister in action.

She was a dancer, a very skilled one, and also a backup singer for numerous popular artists during the transition from disco to new wave at the tail end of the ’70s. But she is best known for her long term relationship with rock star Billy Idol, which proved to be both volatile and creatively fruitful.

She is the daughter of a noted stage actress, Gail Kendall, so it’s not difficult to speculate where her taste for performing comes from. Perri Lister first rose to prominence as a dancer in the popular British troupe “Hot Gossip.” It was with this group that she appeared on Kenny Everett’s TV show.

Everett at the time was one of the leading lights of Britain’s irreverent alternative comedy scene, and Hot Gossip’s appearances on the show brought them a very wide audience. It’s fair to say that Perri’s membership in Hot Gossip was a valuable stepping stone into the world of popular music. Introducing her to the celebrity culture with which she would become irrevocably linked throughout the next decade.

She was part of the small cultural scene which came to be known as the “Blitz Kids,” a group that attended the Tuesday club nights at London’s Blitz club in Covent Garden. Though the group was small, it came to wield considerable cultural influence and is credited with spawning the entire musical movement known as the “New Romantic” era.

Inspired by the mid-’70s glam era of David Bowie and Marc Bolan, this, in turn, led to the ubiquity of such popular artists like Boy George, Duran Duran, Spandau Ballet and Ultravox.

As a dancer, Perri Lister’s screen appearances include the Village People’s musical pseudo-biopic Can’t Stop the Music, as well as music videos for Visage’s “Fade to Grey” and Duran Duran’s “The Chauffeur.” During this time she also established a viable career as a backing singer, providing vocals for such diverse artists as the aforementioned synthpop artists Visage and the eclectic, unclassifiable Kid Creole and the Coconuts.

But she is best known for her links to Billy Idol. Idol remains to this day a bonafide rock star, and one of the faces of the MTV-driven “Second British Invasion” which swept the US in the early ’80s.

Thanks to her involvement with the Blitz Kids, it was a sure thing that she and Idol would cross paths eventually. He was a punk with mainstream aspirations, whereas she was an avowedly mainstream performer with a taste for the rebellious. It was a match made in heaven, and Perri’s influence can be felt in a lot of Billy Idol’s songs from this period.

For instance, take one of his greatest musical moments, the smash hit single “White Wedding.” Perri Lister appears in the video as the bride. She also provides the backing vocals for the more ballad-like “Eyes Without A Face,” as well as putting in an appearance in the video for “Hot in the City.”

This latter video attracted notable controversy and was eventually banned due to its suggestive content. It’s safe to say that their relationship came at the creative and commercial peak of Billy Idol’s music, but it wasn’t devoid of strife and personal difficulty.

These claims originated from Hattersley herself, and stirred up considerable controversy, as Idol’s association with Perri Lister was purportedly monogamous. This prompted Perri to hold a press conference on her own in which she asserted that she and Billy Idol were an exclusive item.

This incident and the amount of press attention it received gives an idea of how much sway the Idol/Lister power couple held in the field of popular music.

But when it came to Perri’s own attempts to step into the spotlight, she was not as successful as you might think. She took a lead role as a member of the short-lived pop group Boomerang, which lasted through the recording of one self-titled album in 1986 and then quickly folded.

In 1988 Perri Lister gave birth to Idol’s son Willem, but the strain on their relationship proved insurmountable and the couple finally split up in 1989. The central cause of this was Billy Idol’s infidelity; it transpired that he had been having an affair with Linda Mathis, who was thirteen years his junior. She too was pregnant with his child.

The end of the relationship marked the end of Perri’s cultural prominence. She quickly faded into the background, and her involvement in musical projects was virtually non-existent from that point onward.

She had a few bit parts in B-movies throughout the 1990s, the most notable being Oscar-winner Curtis Hanson’s Bad Influence in 1990, alongside James Spader and Rob Lowe. But her days as a dancer, a face of the New Romantic subculture and a prolific music performer was behind her.

These days, Perri Lister lives quietly in Los Angeles. Her son Willem has also pursued a career in the music industry. But she remains an enduring icon of those hedonistic days of the early ’80s.

Perhaps the best evidence of this comes from Miley Cyrus’s decision to attend a recent Halloween party dressed as Perri Lister, while her partner Cody Simpson attended dressed as Billy Idol.

As mainstream artists go, there are few as prominent as Miley Cyrus. Her decision to dress as Perri Lister is indicative of Perri’s iconic status in the world of music, and just how recognizable and influential her image is even today.