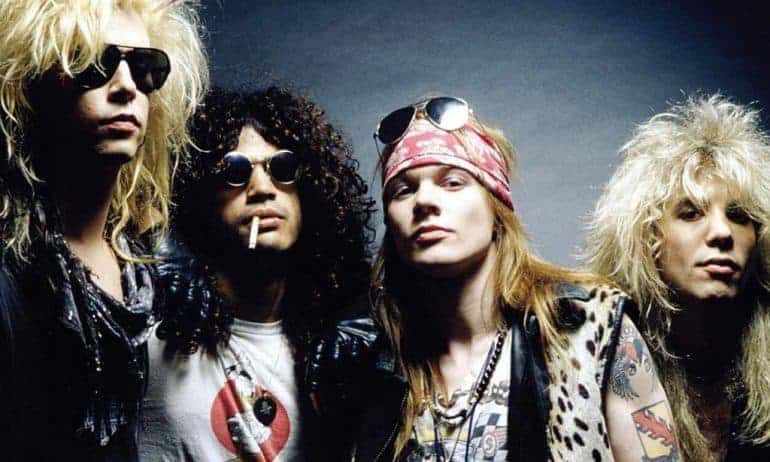 Regardless of your view of ’80s bands and music, we want to shine a light on what we think of as the best ’80s bands that truly epitomized the extravagant decade. So get your neon leg warmers out and synth-pop ears ready.

Even today, these four lads from Ireland are creating beautiful music. But it’s thanks to such career-defining albums as Boy, War, and The Joshua Tree that U2 became one of the most successful ’80s bands. The Joshua Tree album was especially significant in the achievement of their rock sound, also providing songs for the ages with tracks like “With or Without You” and “Where the Streets Have No Name.”

Talking Heads were unique in the way that they were able to reach mainstream audiences but hold onto their authenticity, something which music critics liked. Their trademark new wave sounds incorporated elements of punk rock, funk, and even world music.

Despite their blend of genres, they still managed to appeal to a wide range of listeners and earned themselves top ten singles such as “Road to Nowhere” in the UK and “Burning Down the House” in the U.S. Many subsequent bands and musicians have named David Byrne and Talking Head as significant influences in their own music.

Although Jersey-born Bruce Springsteen emerged during the ’70s, his work in the ’80s was huge commercially. Known for his marathon shows and hard work ethic, the ’80s saw his album Born in the U.S.A smash the charts and produce seven top ten singles on the Billboard Hot 100.

Also, his artistically praised albums The River and Nebraska proved that The Boss and his E Street Band were one of the most prolific ’80s bands.

Formed in 1980, this band from Georgia is often considered one of the ancestors of the alternative rock genre. Their debut album, Murmur, instantly received acclaim and made a name for themselves. Because of Michael Stipe’s hard-to-decipher singing and Peter Buck’s distinctive guitar style, critics praised them from the beginning.

College radio supported them and their releases with endless airplay and numerous shows. In 1987, they broke through to the masses with their top ten hit “The One I Love.” Though they broke up in 2011, R.E.M. was one of the most influential ’80s bands of the decade.

Bret Michaels was among the countless rockstars that MTV helped to produce. After leaving Pennsylvania for Hollywood’s Sunset Strip, Poison built a cult following after the release of their debut album Look What the Cat Dragged In. With the help of controversial interviews and late-night brawls, the group earned a wild reputation.

However, their underlying talent and business acumen resulted in worldwide recognition. Although saturated with the many hair metal groups in Hollywood at the time, Poison’s individual style and bigger than life stage presence carved out their own legacy among the many ’80s hair bands.

Before even signing their first record, Long Island’s Twisted Sister went through countless lineup changes in the span of a decade. Currently, Dee Snider is the face of Twisted Sister, however founding member Jay Jay French founded the band in 1972 with Mell Star, the brother of Bob Marley guitarist Al Anderson.

By the mid-’80s, Twisted Sister caught the MTV wave. Their iconic music videos and distinguished image launched them into international fame.

Another classic ’80s band that emerged from Los Angeles. After performing as Firedom, Crystal Pystal, and Mickey, the band finally settled on the name Ratt. They took Sunset Strip by storm in the early ‘80s. Lead guitarist Warren Demartini, who was only 18 years old at the time, helped the group’s debut album receive airplay on MTV. The group’s success during the ‘80s planted them as early pioneers of the Los Angeles hair band scene.

When discussing the British indie scene and alternative rock, its likely that The Smiths will be mentioned. In a decade of heavy synth usage played on the radio, The Smiths emerged from the underground with their guitar-driven sound, providing some different to synth-pop.

With Morrissey and Johnny Marr at the heart of the band’s songwriting, The Smiths achieved cult status through their blend of indie pop, classic rock, and post-punk sound as well as four UK top five albums while on an independent label.

Although AC/DC’s days with Bon Scott produced some of their greatest work, it’s their body of work with Brian Johnson that put them on the list. Featuring signature tracks like “You Shook Me All Night Long” and “Back in Black,” their album of the same name became one of history’s best-selling albums.

The Aussies further proved they were one of the best ’80s bands when their album For Those About to Rock We Salute You released the next year topped charts for three weeks.

This California band stormed the music scene with their melodic hard rock, as gathered from their smash-hit record Appetite for Destruction, which went on to become America’s biggest-selling debut album of all time.

With a reputation that earned them the title of “the world’s most dangerous band,” Guns N’ Roses were a must-see act in the ’80s if you wanted something more wild than the typical dance and pop concerts. Hit songs such as “Sweet Child O’ Mine,” “Welcome to the Jungle” and “Paradise City” defined a generation and established them as one of the greatest hard rock artists of all time.

The Cure is one of the ’80s bands which arguably had the most significant influence on the next decade’s music. Although their early work was generally categorized as gothic rock, The Cure soon transformed their sound to more radio-friendly ears. Their new blend of alternative rock combined with a lighter gothic sound paved the way for recurring entries on the Billboard Hot 100 chart and global fame to this day.

After playing in various New Jersey bands from 1978 to 1983, Jon Bon Jovi decided to form his own band In August of 1986, Bon Jovi’s release of Slippery When Wet cemented them as a true ’80s hair band. Not only did Jon Bon Jovi’s powerful vocal range help the band gain commercial success, but his charitable efforts also reached the hearts of millions globally. Although a brief breakup, the band always seem to regroup and pick up where they left off and have become one of the best selling rock bands of all time.

Although David Coverdale was shocked by the breakup of his classic rock band Deep Purple in 1976, he soon released a solo album titled White Snake a year later. A year later, he had established a new band called Whitesnake and released a hugely successful debut album titled Trouble.

If you remember the ’80s, you’ll recall Coverdale’s wife Tawny Kitaen appearing in the music video for “Here I Go Again.” Over time, the band’s sound transformed from blues-rock to a more commercially sounding rock. The move proved to be fruitful, garnering a loyal following and career spanning four decades.

Although Aerosmith encountered huge success during the 1970s, “The Bad Boys from Boston” attained even more elevated altitudes when they collaborated with Run-D.M.C. in 1986 on the track “Walk This Way.” This was swiftly followed by the release of their top twenty album Permanent Vacation in 1987 and then Grammy Award-winning Pump, which took listeners back to their grunge early years.

Mötley Crüe began their music career with a bang. The heavy sound of their first two albums, Too Fast for Love and Shout at the Devil, led to rapid success. Fueled by sex, drugs, and alcohol, their antics quickly gained them the reputation as the “World’s Most Notorious Rock Band” in the 1980s.

Despite being disregarded after Black Sabbath, Ozzy amazed fans with the top forty success of his solo albums during the ‘80s. Supported by some of the ’80s most distinguished guitarists like Randy Rhoads, Jake E. Lee and Zakk Wylde, Osbourne became a notorious showman whose unexpected theatrics boosted his fame and earned him his reputation as the “Prince of Darkness.”

After receiving accolades for the ground-breaking rock music on their 1978 debut, Van Halen released a surplus of harder and heavier albums in the ’80s. Thanks to Eddie Van Halen’s guitar-playing and the stage presence of David Lee Roth, it was some of their most exceptional work; however, the peak of their success came when their first album with Sammy Hagar, 5150, in 1986 reached number one spot and foretold their next three chart-topping albums to come.

The Scorpions established their style of hard rock and melodic balladry during the 1980s with albums like Animal Magnetism and Blackout. But, it was 1984’s Love at First Sting and the smash hit “Rock You Like a Hurricane” that truly turned these Germans into one of the best ’80s bands. Their random butchering of the English language couldn’t even stop them, with over 100 million albums sold worldwide.

The death of Joy Division’s frontman and genius Ian Curtis didn’t stop New Order from becoming one of the most significant ’80s bands. After Curtis’s suicide, the band’s remaining members regrouped and changed their sound, adding dance and electronic music to their blend of post-punk New Wave and alternative rock. While critics and fans cherished them, they made music history when their track “Blue Monday became the best-selling 12-inch single ever.

One of the biggest bands to come out of Sweden, their smash hit “The Final Countdown” always got the crowd going. Europe originally formed during the late 1970s as Force and achieved popularity throughout Sweden when lead singer Joey Tempest and guitarist John Norum both won national performance contests. After the release of two successful records, Europe acquired the attention of Epic Records, who they went on to record their breakthrough album with and producer of Journey, Kevin Elson.

A list of the best ’80s bands wouldn’t be complete without this new wave, pop-rock, and post-punk Scottish band. After becoming popular during the New Romantic movement in England, Simple Minds captured the American hearts with their recording for The Breakfast Club movie soundtrack. The group has since proceeded to make their name in the alternative rock world and notwithstanding various lineup changes, they’re still alive and performing today.

Without the Pixies, who knows if grunge would have even existed. The master of grunge himself, Kurt Cobain, often said he was striving to imitate the Boston band’s musical style with his band Nirvana. It was their dynamic range and variation in quiet and loud that soon became one of alternative rock’s most noticeable features. The combination of impassioned vocals with their indie punk and surf rock-influenced tones, Pixies went down in music history.

Although their debut album didn’t get them off to the quickest start, their second album soon saw the tide change. Its title track “Sweet Dreams (Are Made of This)” rose to the top of multiple charts around the world. Annie Lennox’s powerful vocals and compelling looks attracted critics and fans’ notice.

Their predominantly synth-based sound and experimental nature helped the Eurythmics take over the charts and also inspire a second wave of a British invasion, musically that is.

With the two founding members originating from the band Graduate, it only seemed natural that Tears for Fears would follow this new wave and modish sound. However, Tears for Fears embraced a more pop-rock sound that really took on commercially, topping both the UK and US charts. Similarly becoming part of the second British invasion.

With their 1981 album Speak & Spell, Depeche Mode entered the music scene with their more electronic sounding version of alternative rock. Although the departure of Vince Clarke, the band reinvented itself with a more foreboding sound that enthralled teens universally. It also helped the band enter the mainstream where they have since sold over 100 million albums worldwide and won multiple Grammy Awards.

We hope you’ve enjoyed our list of the 25 best 80s bands.