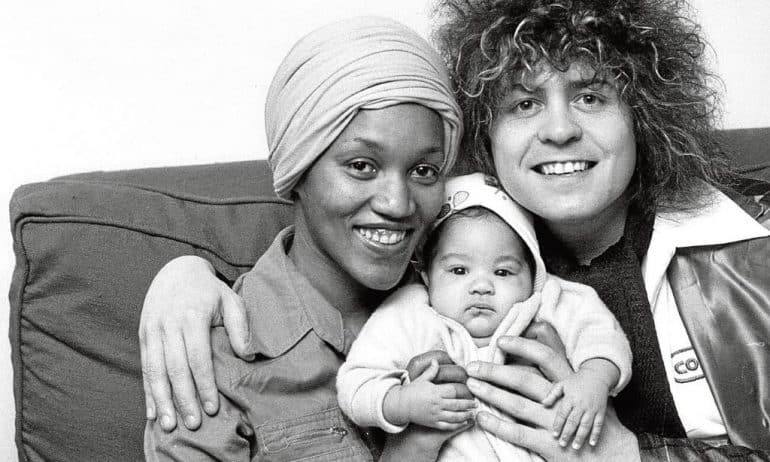 Who Is Rolan Bolan?

Rolan Bolan was born in 1975, son of glam-rock legend Marc Bolan, who had already achieved iconic status with the band T-Rex. But in 1977, when his son was barely two years old, Marc Bolan was killed in a tragic road accident at the age of twenty-nine.

The driver of the car, Gloria Jones, who was also Rolan’s mother, emerged from the accident alive but severely injured. Specifically, she broke her jaw, leg, and foot, as well as suffering serious internal injuries. Rolan’s first memories are of paying visits to his mother in the intensive care ward of the local hospital.

But with Marc Bolan’s death, Rolan’s difficulties were only just beginning. Though Marc was widely acknowledged to be in a long-term relationship with Gloria, he was in fact still legally married to his first wife, June Child.

This prompted a messy legal battle over Marc’s estate and one which Gloria and young Rolan Bolan were bound to lose. Because the grim truth was that they had no legal entitlement to any of Marc’s money.

“My mother went from a millionaire lifestyle to virtual poverty, and I often went without”

In an interview with the Daily Mail, Rolan Bolan recalls the situation.

“One terrible irony is that when I was born my father had slowed down his lifestyle because he took his responsibilities as a parent very seriously. Apparently he was being reflective about his own future because punk was taking over from glam rock.”

“The royalties were still flooding in from his records, and he and T. Rex were still headlining sell-out shows, but my arrival had sobered up his thinking.”

But Marc had realized he was paying an extortionate amount of tax, so he was in the process of setting up a tax-avoidance trust in the Bahamas to provide his family financial security.

Rolan Bolan continues, “Unfortunately, he hadn’t had time to finalize all the details, so although his income was being protected, he hadn’t yet made provision for my mother to have access to the money.”

This catapulted Gloria and her young son from a life of opulence and showbiz esteem to one of comparative poverty out in LA. But a savior soon emerged in the most unlikely of personages: none other than David Bowie.

Bowie and Bolan had been close friends, and Bowie had even worked hard to help Bolan when he was in the midst of drug addiction and was struggling with the rapidly diminishing popularity of his music amid changing cultural tides.

In fact, Marc Bolan had made a concerted effort to turn his life around on Bowie’s instigation. He gave up on the drugs and devoted himself to being a better father to young Rolan Bolan. That’s what made his untimely death all the more tragic.

David Bowie was Rolan’s godfather, a role which he took very seriously. So while Gloria and Rolan slipped nearer to destitution in Los Angeles, he did all that he could to help them. He made regular payments to keep them financially afloat, as well as calling them regularly on the phone to chat and offer emotional support.

Rolan has reflected on Bowie’s generosity a lot in later years and claims that without it he and his mother would have found it difficult to survive.

He said, “David’s generosity helped my mother and me to survive. It wasn’t just the financial help, but the time and kindness. He never came to see us in California because he lives in New York and hates to travel. But he kept in regular touch by phone and his first and last words every time were: “Don’t hesitate to tell me if there is anything I can do.”

Bowie paid for Rolan’s education but has never spoken about his altruism publicly. But there’s no escaping the fact that Bowie paved the way for Rolan to achieve a viable career on his own, without having to trade on his late father’s name.

Rolan went on to achieve a degree in fine arts, and to work as a model for Tommy Hilfiger. And when June Child passed away in the early ’90s, he finally came into the fortune that was his legal birthright.

Nowadays he works as a singer-songwriter, but his sound and look are very different from his father’s.

He’s always looked up to his rockstar father, he went on to say, “His warmth and love were there so much through his music. When I was six, I’d play his records at home. Apparently my favorite was Born To Boogie… It was one of the few reminders I had of him — that, a gold disc and an autographed tambourine.”

He continued, “And with all the photographs that exist and the stories I’ve heard, I can picture us together in my mind’s eye. I can even hear his kiss — it’s as if I am in my cot and he’s leaning over me to say goodnight.”

Like Marc Bolan, and like his benefactor David Bowie, Rolan Bolan has opted to plow his own unique furrow.