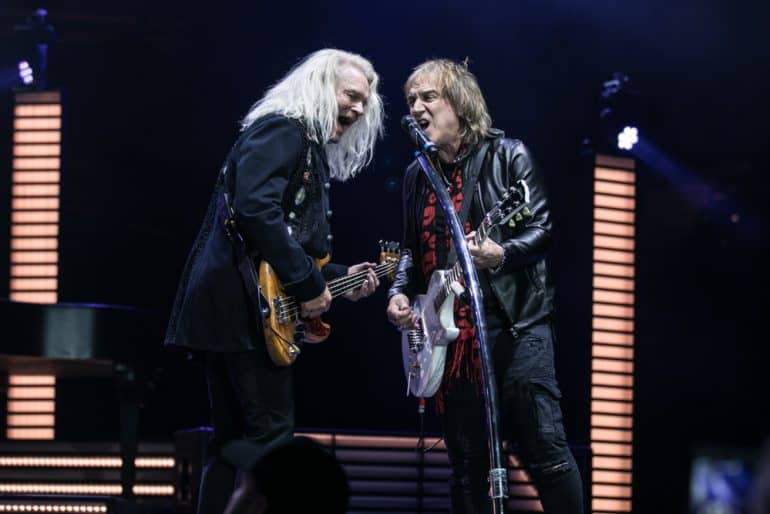 Oh no, when you get to be in your 60s, the hangover lasts way longer than the party.  It is not worth it.  I try to use a little bit of common sense these days

There was a time when scores of REO Speedwagon songs were at the top of the rock and roll food chain and every single record that bore their name turned to gold.

They might not have the same chart-busting power that they did in their late seventies and mid-eighties heyday, but whenever they hit the road, the band can sell out show after show after show.  And who needs to sell records when you’ve got Spotify and ticket sales on your side?

They were, and are a consummate American rock and roll band, storming the music scene with the likes of Styx, 38 Special and The Beach Boys. While they spent the first decade of their recording career turning their amps up to eleven, putting the hammer down, and slowly building a faithful, dedicated audience from sea to shining sea, by the time the nineteen eighties were in view, REO Speedwagon had chosen to soften their approach and invite everyone to show.

They weren’t just the band that the guy with a ‘73 Camaro would blast out of his eight-track with his windows down as he tore up and down Main Street anymore, they were the band that every station across the country was playing and plugging, and they racked up more hits than every star quarterback in every final quarter did.

Sure, they’re a mainstay of classic rock radio now, but in their day REO Speedwagon had thirteen US Top Forty Hits and sold more than forty million records, which means that they’re still one of the biggest selling bands in rock and roll history.

Which isn’t too bad for a hard-rocking crew from Illinois, who never really expected to sell any records and always preferred life on the road to being stuck in the studio, But when the chart-climbing cheques started coming in, that’s when the Wagon got serious and they started to plan their journey down the road to immortality a little more carefully than they had before.

Someone must have told the bands founding, and only remaining original (don’t worry, every other member of the band has spent at least thirty years crisscrossing America as a member of the Speedwagon) member Neal Doughty what his future held and that he’d fall in life with the road, as he named his band after the precursor to the modern pick-up truck, the R.E.O. Speedwagon, which was the utilitarian vehicle of choice for the blue-collar businessman during the first half of the 1920s.

And like the truck that they were named after, and to honor, REO Speedwagon was built to last and go the distance and that’s exactly what they’ve been doing for the last fifty years.

A half-century of playing anywhere and everywhere they can is something that should be celebrated and cherished, and that’s why we decided that it was time that we doffed our caps to REO Speedwagon, and paid tribute to the band that honored American invention ingenuity by putting together our definitive Speedwagon top ten.

It’s packed full of the rockers and chart-toppers that the band still play to this day, so hop aboard, it’s time to push the loud pedal through the floor and get down and dirty with the boys in the Wagon…

A barn-bursting classic from their debut album R.E.O. Speedwagon, 157 Riverside Avenue was written about the house that the band stayed in while they were recording that record, and it’s been part of their set since their first record landed in 1971.

And the crazy thing about the tune is that the band never plays the same version twice, and even though it clocks in at just under four minutes on the record, live it can last anywhere from ten to fifteen minutes.

Which just proves that if you want to spend some serious time with REO Speedwagon the best way to do it is in a sweaty, cramped venue when the lights go down and the band hit the stage.

The title track from the band’s third album is the sound of a band ahead of their time, as the song would become a hit for the band when they released it from their live album You Get What You Pay which hit record stores four years later.

Four years after he left the band because of the age-old, all-encompassing rock and roll excuse “musical differences”, the voice of the band Kevin Cronin returned to the fold to record 1976’s R.E.O. and Keep Pushin’ was the first track from the record that let the band’s fans know that it was business as usual and that they were back to their hard-rocking best.

Some things are just meant to be, apple pie and ice cream, the 440 Magnum powering a 1970 Dodge Charger, and Kevin Cronin singing for REO Speedwagon. It’s just the way things are meant to be.

The lead single from the band’s seventh album, You Can Tune A Piano But You Can’t Tuna Fish saw them start to adopt the more mellow, slightly laid pop back pop-infused sounds that they’d later become famous for.

When it was first released Time For Me To Fly barely scraped into the Billboard Top Sixty but after it appeared in the show Ozark, it re-entered the digital charts and gave the band a Top Thirty hit nearly four decades after they first unleashed it on the world.

Sometimes all a band wants to do is kick back and play the songs that they fell in love with, which is why REO Speedwagon recorded Chuck Berry’s Rock And Roll Music for their 1979 album Nine Lives which saw them further soften their hard-rocking, live punch to make sure that everyone who decided to check them out life would have a good time from the minute they fired up their amps until they took their final bow at the end of the show.

6. Keep On Loving You

By the time the band released their ninth studio album Hi-InFidelity in 1980, they’d studied what they needed to know to write a genuine hit and pull as many people to the venues they were playing to see them, and Keep On Loving You did what no one expected it to do.

It climbed to the top of the Billboard Hot One Hundred and gave the band their first Number One single. And no one was more surprised than the band was when it went on to sell over one million copies.

The opening track from Hi-InFidelity was another surprising hit for REO Speedwagon as it’s a good old fashioned rocker that, admittedly is slightly polished and a lot cleaner than some of their earlier adrenaline-packed rockers, but the wailing guitar that powers the song to its finale was usually anathema to the record-buying public.

But that didn’t stop America from buying enough copies to send the song all the way to Number Twenty Four.

The Hi-InFidelity hits just kept on coming and the follow-up single to REO Speedwagon’s first Number One, Take It On The Run sold over 500,000 copies and reached the Number Five spot on the Billboard Hot One Hundred.

The band’s second and last US Number One single arrived in 1984 and was the song that they went on to perform on Live Aid when they played the show that was broadcast around the world. That’s right folks, REO Speedwagon played the biggest concert in the world. Pretty cool, huh?

Much as love the more laid back hits that the band seemed to churn out in the eighties, REO Speedwagon were at their absolute best when they just let loose and threw caution to the wind, as they did on 1973’s Son Of A Poor Man which they’re still playing forty-eight years later.

And that’s it folks, our top tribute to one of America’s greatest rock and roll bands, REO Speedwagon.