Our Top Ten List Of The Greatest Ever Elton John Songs 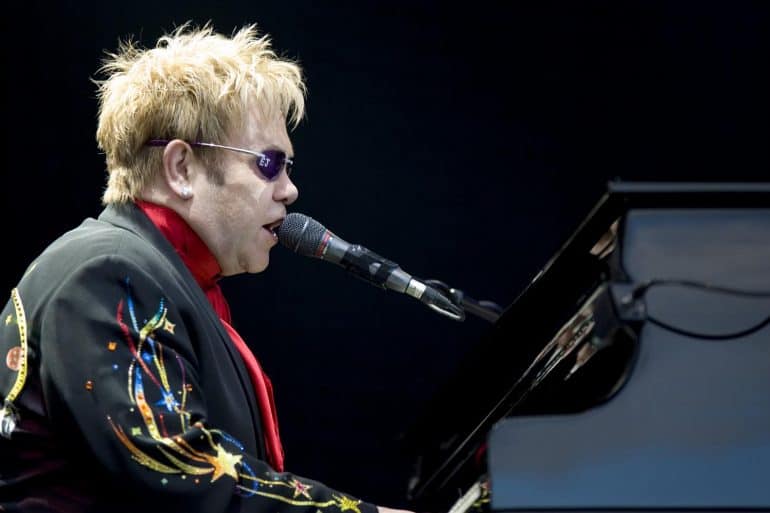 Elton Hercules John was always destined for greatness, it just took the rest of the universe a couple of decades to realize what the piano player from Pinner had always known.

Born Reginald Kenneth Dwight, Elton was never comfortable in the overly scrupulous and demanding microcosm of nineteen fifties middle-class Middlesex, and almost as soon as he could walk, he began to reject the soul-crushing ideas and expectations of his father.

He was, as has sometimes been noted, the epitome of silent rock and roll rebellion, and continually pushed back, in his inimitable fashion, against the boundaries that the rigid, stiff-upper-lipped doctrine of the society he was born into insisted on placing in his way.

A talented and natural piano player and singer, Elton began his career like so many others before and after him did, playing in the pubs and bars of swinging sixties London, but it wasn’t until he answered an advert in the classifieds section of the New Musical Express in nineteen sixty-seven, that he met the man who would change his life, Bernie Taupin.

Taupin was a razor-sharp lyricist with a gift for prose and observation, and John was a musician with an ear for infectious and instant melody and the heart of a composer. It was a match made in heaven, but it took the newly established partnership another three years to write the album, Elton John that would transform their fortunes and catapult Reginald Dwight to the dizzying heights of international superstardom.

Hit followed hit, and album and album topped the best selling charts in every corner of the globe, and less than a decade after he first walked out onto the stage of the Troubadour in Los Angeles, Elton John was one of the biggest rock and roll stars in American history.

But the years of constant touring and recording had started to take their toll on the flamboyant rock star, and by the time the nineteen-eighties began he was burned out and enslaved by crippling addictions to both cocaine and alcohol.

Unsure of himself and desperate to find the help that he so sorely needed, Elton John began to slowly but surely seek help with, and conquer his demons and unlike so many of his contemporaries refused to give in to them.

And despite numerous setbacks, heartaches, and periods of incredible melancholy, Elton John continued to write the songs that lay at the heart of the soundtrack for multiple generations of fans.

The Best Ever Elton John Songs:

After more than fifty years of playing sold-out shows to fans all over the world, more hit singles in more countries than almost any other artist in the history of rock and roll and having sold more than three hundred million albums, in two thousand and eighteen Elton John embarked in his final three-year tour and drew the curtain on his life as a performer and a recording artist.

And as gets ready to take his last bow, we thought that the time was right to take a look at some of the highlights of Elton John’s incredible musical legacy through our (possibly controversial) list of the top 10 greatest ever Elton John songs.

It’s difficult to imagine that there was ever a time when the world was balancing on the edge of armageddon, but it did happen as American and Russia (or as it was known at the time, the USSR or Union of Soviet Socialist Republics – it’s a communist thing) continually vied for global supremacy.

In nineteen eighty-five, Elton John threw his hat into that particular theatre of conflict that silently raged under the moniker of the Cold War with Nikita, a heartfelt ode to unrequited love and the possibility of what might be if the world had been different.

The story of a man who longs to meet a guard stationed on the East German side of the Berlin Wall who he has affectionately nicknamed Nikita, the soulful ballad is a testament to the power of the human heart and our need for companionship and to be loved irrespective of artificial divisions and made up borders.

And this heartfelt flight of fancy was also one of Elton John’s biggest-selling top ten hits of the eighties on both sides of the Atlantic.

A rare example of an artist hating a song because of the nightmare scenario that unfolded when he was recording it, Don’t Let The Sun Go Down On Me was written during the sessions for ninety seventy-four’s Caribou and wasn’t exactly a favorite number with Elton when he was tasked with recording it.

Although it appears to be built around a relatively simple melody, verse, and chorus, the song is actually notoriously difficult to get right and Elton, ever the perfectionist, had a devil of a time trying to get it right.

The song’s fortunes changed dramatically in the eyes of the man who recorded it when it hit number two on the Billboard Hit One Hundred and has since gone on to become one of his most memorable singles.

And in nineteen eighty-five, it was the single that Elton John and George Michael dueted on when they performed in front of the whole world for ‘Live Aid’. Which isn’t too shabby for a song that no one seemed to care for, or about before it was first released.

3. Candle In The Wind

One of the five hundred greatest songs ever written according to Rolling Stone magazine, and now more infamous as the song that will forever be associated with the death of Diana, Princess of Wales in nineteen ninety-seven, Candle In The Wind was originally recorded for and appeared on Elton John’s groundbreaking nineteen seventy three album, Goodbye Yellow Brick Road.

An ode to Marilyn Monroe, who has passed away eleven years before it was written, Candle is a threnody (a mourning poem set to music) that charts the impact that its subject had on Taupin and John’s lives while lambasting the way in which the press treated the starlet in the immediate aftermath of her untimely death.

The platinum-selling single (Candle sold two hundred thousand copies in the United Kingdom alone) has always been and remains to this day a staple in Elton John’s live set.

A number-one single in America and the United Kingdom, Don’t Go Breaking My Heart was written under the pseudonyms ‘Ann Orson’ and ‘Cart Blanche’ by Taupin and John and was originally intended to be a pastiche of the incredibly popular, at the time it was written, duets that Motown regularly released.

Recorded and released in nineteen seventy-six, Don’t Go Breaking My Heart was supposed to be performed by Dusty Springfield and Elton John, but following the former’s decision to turn the song down, the latter turned to the first British artist to sign to Motown Records, Kiki Dee, instead.

A lighthearted song that wears its heart on its sleeve, it’s an incredibly infectious tune that once heard is never forgotten. Just like the Motown songs that it gently, and lovingly mocks.

While it’s become more famous for its video that was filmed in Cannes and features some of the most sought after dancers of the period, and the legendary party that happened during the video shoot that was documented by Duran Duran’s Andy Taylor whose band were also in Cannes at the same time, I’m Still Standing is Elton John and Bernie Taupin’s defiant call to arms that served to remind the music business that they weren’t going anywhere and were still at the top of their game.

It might not have collected the same dizzying sales figures as some of Elton John’s other singles, but I’m Still Standing became a fixture on MTV’s schedule, which helped the album that it was featured on Too Low For Zero to sell a million copies in America alone.

The subject of a much denied urban myth that Taupin wrote the lyrics for Elton while watching him work in the offices of a music publishing company, Your Song was the single that helped Elton John to conquer America.

Recorded for, and released as part of Elton John’s nineteen seventy album Elton John, Your Song was originally the B-Side of the Take Me To The Pilot single.

But as the other side of the record started to get more airplay than the song it was supposed to support, the order was switched and Your Song became the A-Side and went on to reach number eight on the Billboard Top One Hundred, and was Elton John’s first American top ten hit.

Another of Elton John’s early American Top Ten Hits (it actually took the top spot on the Billboard Hot One Hundred) Crocodile Rock originally recorded for, and appeared on Elton John’s nineteen seventy-two album Honky Chateau but was released as a precursor to and to wet the audience appetite for, nineteen seventy-three’s Don’t Shoot Me I’m Only The Piano Player.

A nostalgic ode to the early days of rock and roll and Elton’s formative years in the phenomenon that would change his life, Crocodile Rock was also the song that he played the first time he appeared as the guest host on ‘The Muppet Show’.

The song that sold half a million copies in the United States, Saturday Night’s Alright For Fighting is, according to Bernie Taupin, an American rock and roll anthem that just happens to be set in a small English town.

A tune that welcomed the emergence of the burgeoning glam movement with open arms, it’s a hard-driving, guitar and piano-fueled sing-a-long that has carved its place in rock and roll mythology.

Inspired by the raucous weekends of Taupin’s youth, Saturday Night’s was about the busiest night of the week in a typical English pub during the late sixties and early seventies, which would inevitably end the same way. In a drunken brawl in which all of the pub’s patrons would enthusiastically take part.

While a lot of Brits will do their best, and go to great lengths to claim that those fights are a thing of the past, the truth is the more things in a British pub change, the more they stay the same.

The title track from nineteen seventy-three’s Goodbye Yellow Brick Road, a double album that is widely regarded as being Elton John’s finest moment, is one of his most haunting and memorable songs and the second of his tunes to make Rolling Stone’s list of the five hundred best songs ever recorded.

The song is widely viewed as being a rejection of the trappings of fame and fortune and a yearning to return to the simpler life that the central character relating the story knew before he was consumed by the need to follow the Yellow Brick Road to a ‘better life’.

The lead single from nineteen seventy-twos Honky Chateau was a UK and US top ten hit for Elton John and is a wistful tale of an astronaut in a time when space travel has become commonplace and the inherent loneliness of the job that he’s dedicated his life to.

Jointly inspired by Taupin’s encounter with a shooting star and Ray Bradbury’s short story The Rocket Man that was published in The Illustrated Man, Rocket Man has sold more than six hundred thousand copies worldwide, and the title of the film about Elton John’s life took its name from the song.

Since you’ve made it this far, you should definitely jump over and check out our list of the best Elton John album covers ever made. The artwork and history behind them complement the brilliance of his music perfectly.