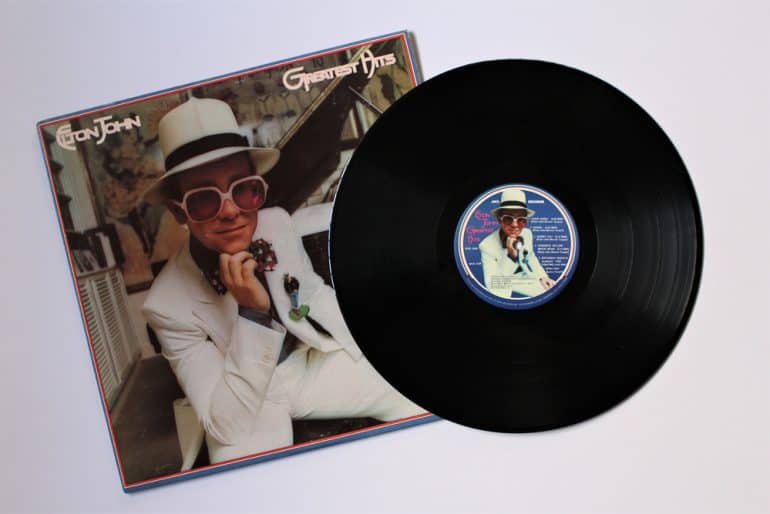 Our lifelong love affair with Elton John’s music began before we heard him sing or play a single note. Way back in the mists of time when we first discovered music, we were flipping through our parent’s record collection and found two albums that we were completely transfixed by.

One featured a stark black and white image of a man’s face half-hidden in shadow, and the other was a superbly detailed, finely drawn picture of the same man climbing into a tattered street poster of the Yellow Brick Road from The Wizard Of Oz.

Both of the covers were captivating and held us in thrall for hours, as we desperately tried to imagine the scenarios that had inspired the images.

We spent hours staring at the sleeves before we remembered that they were actually records and that we could play them, and almost as soon as we did, we began to understand the pictures that adorned the covers of the records.

The artwork used for the Elton John album covers was connected to the songs on the record and was part of the experience of listening to his music.

And the more you listened to the music, the more you understood why he’d chosen the images he had, and the more time you spent absorbing every minute detail of the art, the greater your emotional connection to his music and lyrics became.

Elton John was the first musician who made us realize that art possesses a deep and meaningful connection that the artist and audience share. That moment of realization was incredibly powerful, and it changed the way we listened to and experienced music from that point on.

As he’s approaching the end of his extraordinary career and playing his farewell tour, we thought it would be an opportune time to share our top ten Elton John album covers with you, so that we could pay tribute to the artist, the musician, and the man who changed everything for us.

But how do you choose just ten covers from a musician whose discography includes nearly fifty different albums?

We decided that the only way we could confidently choose the ten best album covers from Elton’s staggering back catalog was by focusing on the records that meant the most to us, the albums that we’d forged an incredibly personal relationship with.

You might agree with our choices, you might not, but that’s what makes music and art so intensely personal, the individual connection that you make with it. That said, this is our, as we’ve already said, incredibly personal, top ten best Elton John album covers.

Recorded in the aftermath of a particularly grueling and exhausting tour, the cover for nineteen seventy-sixes Blue Moves is a painting by Patrick Proctor entitled Guardian Readers that mocks the insular world of the self-entitled, intellectual elite.

It also serves as a stark reflection of the loneliness and exhaustion that Elton John felt as his intense and demanding schedule took its toll on his physical and mental health.

Musically, all of the songs capture John’s fragile emotional state almost perfectly, and the cover is an image that you can lose yourself, in much the same way that John did while he was on the road, in as you begin to imagine the lives of the people pictured on the sleeve in all of their endlessly involving minutia…

The cryptically titled A Single Man from nineteen seventy-eight was the first album that Elton John wrote and recorded without his longtime lyrical partner Bernie Taupin, and the picture on the cover of the album, and the one on in the interior (of Elton sat in a Jaguar) feel almost like he’s pointing his finger at his former partner and saying “See, I told you I’d be fine without you”.

Rather than portraying a successful artist, the image seems to be lost in loneliness and despair, almost as though John has resigned himself to a life without his best friend. It’s a powerful image, but it doesn’t portray the message that John hopes it will.

Elton John’s first album, Empty Sky from ninety sixty-nine features an intensely hopeful and almost wistful image of a man lost in the endless possibilities of the future on its cover, which is in part at least, borne out by the songs on the record.

When we stare at it, it always makes us wonder if the man in that picture had already known what Elton would discover about being a musician in the next decade, whether he would have walked away from the business or followed his heart into darkness…

The stark half shadowed portrait of the artist that graces the cover of nineteen seventy’s Elton John absolutely captures the subjective and lyrical mood of the music. Somber, reflective, and slightly mysterious it’s an image of a man who is hesitant to reveal himself to the world and can only communicate through his piano and songs. And, it’s one of the records that made us die-hard fans of Elton’s entire seventies discography.

Nineteen seventy’s Tumbleweed Connection (Elton John’s third record), is a concept album that’s loosely based on a series of stores connected by Americana and early twentieth-century life in the Midwest and it encapsulates the theme of the songs and the ideas that Taupin and John explore on it with consummate and deliberate ease.

And again, it’s another image that you can easily lose yourself in as you try to imagine the life of the characters who wander into and through the store…

One of Elton John’s most critically lauded albums, nineteen seventy-twos Honky Chateau is a collection of heartfelt, incredibly personal songs that have pushed the man pictured on the cover to the point of mental exhaustion as he desperately tried to find a way to commit the frankly jaw-dropping ensemble to tape.

At least, that’s the way the cover makes us feel every single time we look at it, and listening to the heartfelt music that it contains almost always brings us to the point of tears. A beautiful cover, and an incredible album.

Number Four – Don’t Shoot Me, I’m Only The Piano Player

The cover of ninety seventy-three’s Don’t Shoot Me,,.. despite the fact that the album features two of Elton John’s best songs, Daniel and Crocodile Rock is completely unrelated to any of the music and the lyrical content of the album.

It’s based on a conversation that Elton John had with Grouch Marx, and the title and the cinema spoof were inspired by his meeting with one of his comedic heroes. It’s an image that captures the raw gut-felt passion of an artist being inspired by another artist to produce some of his best work.

Number Three – Madman Across The Water

We wish we could quantify or properly explain why we love the cover of nineteen seventy-one’s Madman Across The Water as much as we do.

It isn’t particularly clever and isn’t artistically brilliant, but it does look like a flyer for a show that might have happened in the heyday of the Fillmore in San Francisco or the early days of the Whiskey A-Go-Go in Hollywood, and the musically it feels like it would be at home on the stage of both of those clubs. It’s a time and a place thing…

Musically, ninety seventy-three’s Goodbye Yellow Brick Road is our favorite record from a young Elton John, and the desperate sense of escapism and unbridled imagination that’s caught in the album’s cover has inspired us for decades. And it was this record’s cover that helped to forge our enduring passion for Elton John’s music.

Number One – Captain Fantastic And The Brown Dirt Cowboy

The cover for nineteen seventy-five’s Captain Fantastic was designed by artist Alan Aldridge and was based on Hieronymous Bosch’s The Garden of Earthly Delights. An intricately detailed piece of art that revels in the insanity and pure joy of music, it isn’t just the best Elton John album cover, it’s quite possibly the greatest album cover of all time.

That’s it, our cover-based tribute to one of the greatest artists of all time, Elton John. We hope that you enjoyed it, and we hope that you agree with our choices, but if you don’t feel free to drop us a line and tell us what your top ten covers would be…