The 15 Best Jimi Hendrix Songs That Changed The Music Industry 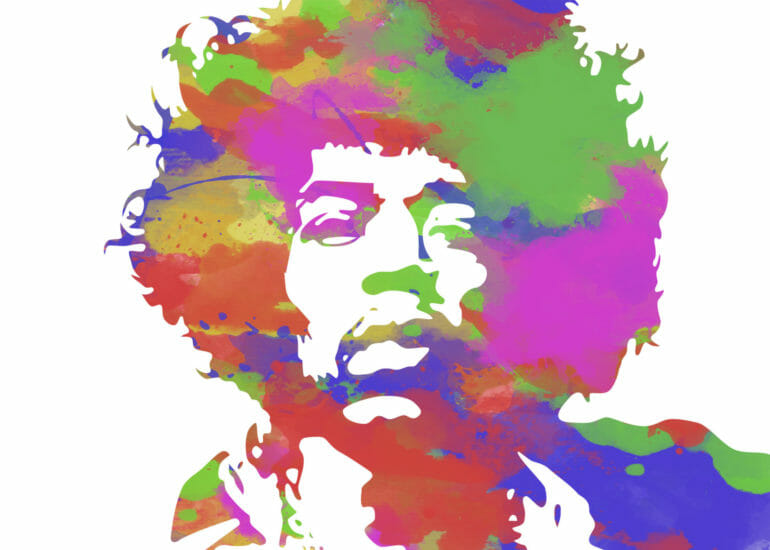 Dear Reader, a painful task sits before your humble author… ranking the best Jimi Hendrix songs. How, I ask of you, do you go about applying a hierarchy to various shades of perfection? Can it even be done?

Well, I’m going to try my best, but as you make your way through my list, bear in mind that the numbers mean very little and that each and every one of these songs is an absolute masterpiece that completely changed the music industry in their own way.

The Best Jimi Hendrix Songs Of All Time (According To Me)

“Are You Experienced” was Jimi’s first studio release with The Jimi Hendrix Experience, and was a musical declaration that the rule book had been thrown in the trash, or perhaps immolated — As Hendrix was one to do!

Every single instrument is set in reverse at one point or another over the course of the psychedelic track’s 4:14 runtime.

The experimental recording techniques juxtaposed with Jimi’s fuzzed-out yet classic chord choices immerse the listener in a new world that’s as warm and inviting as it is oddly askew — It’s a first joint/first mushroom trip kind of feeling.

Up until Hendrix came along, most recording artists subscribed to the idea that a studio cut had to be as polished as possible, but with tracks like “Spanish Castle Magic,” Hendrix showed the music world that more distortion, more bombast, and more attitude was a far more enjoyable approach for artist and listener alike.

It sounds like the band hit the studio, recorded it in one furious take, then took off to hail a dragonfly to take them to a rip-roaring party at the Spanish castle referenced in the title and lyrics.

True to form, Hendrix lays down some extremely impressive guitar tracks on “Burning of the Midnight Lamp”, but in my opinion, the most groundbreaking and enjoyable element of this tune is the soulful choir backing on the build to and throughout the choruses.

With Mitch Mitchell going berserk behind the skins and Jimi wailing away, you’re tricked into thinking you’re listening to another balls-to-the-wall psych-blues track.

Then all of a sudden, a wave of angelic voices hit you like a rapturous light, redefining your listening experience before the track even reaches the 1-minute mark.

Considering how rife “Wait Until Tomorrow” is with pure riffery, you’d expect Hendrix to stack on tons of distortion and go wild, and while he does indeed go wild, he opts for perhaps one of the cleanest guitar tones of his entire back catalog.

With oodles of punch to cut through the mix, Hendrix unknowingly dialed in a very modern-sounding funk tone, one that wouldn’t sound out of place on a Cory Wong track today.

One of Hendrix’s most romantic cuts, “May This be Love” is a tender love song for the ages.

Showcasing one of Jimi’s slowest and softest solos, he was perhaps one of the first people to bring the full dynamic range of jazz guitar to the raucous world of blues and rock and roll.

His spare picking during this passage allows his right hand to do most of the heavy lifting, something you’ll hear a lot of in modern guitar virtuosity.

“Little Miss Lover” isn’t a particularly celebrated Hendrix track, probably because his contribution is rather buttoned down.

Letting bassist Billy Cox handle the driving riffs until roughly halfway through the song, Hendrix is free to add little wah-infused rhythmic embellishments, a technique that countless guitarists would weave into their playing style through the years, chief among them, one Mr. Tom Morello of Rage Against The Machine.

There is no shortage of blues songs with vagabond protagonists, but the lyrical content isn’t what made “Highway Chile” such a novel track.

For me, it’s the high-drama full-step bends that open the song and return with each chorus, chopping a pretty by-the-numbers Delta blues-style composition into a rock and roll masterpiece.

I can hear as much B.B. King in “Highway Chile” as I can Black Sabbath, so there’s no doubt it informed Tony Iommi’s playing on the band’s 1970 self-titled debut.

“Fire” is another shining example of Hendrix taking elements of archetypal blues and transplanting them into a seamless rock and roll romp.

The interweaving of guitar stabs and vocal passages of the verses is a quintessential blues staple, but Jimi makes it his own by replacing the plodding du-duhhh du-du blues voicing with the rapid-fire du-du-du-du.

It’s still four notes, and they still split the vocals up, but the altered musical syntax transforms them into a punchy, pulse-raising lick that can keep up with Mitch Mitchell’s insane rock and roll rhythmic stylings.

We have the manager of the Jimi Hendrix Experience, Chas Chandler, to thank for “Purple Haze”. When Hendrix pieced together the “Purple Haze” riff backstage at a small London venue, he was just noodling around.

If Chas (who was in the room) hadn’t said to Hendrix, “Write the rest of that. That’s the next single”, this track likely wouldn’t exist.

At this point, the likes of Eric Clapton, Jeff Beck, and The Rolling Stones had already created a market for American blues in the UK, but Hendrix was never a straight blues player.

He wanted to break England doing things his own way, and “Purple Haze” became the perfect gateway track for new listeners across the pond.

Slow, cool, sexy, and bursting with attitude, it was bluesy enough to appeal to the general public, but off the wall enough that they understood there was something special about this Hendrix fella.

“Manic Depression” is a strange beast that combines heartbreaking lyrics surrounding mental health with one of the bounciest riffs in Hendrix’s entire discography.

Throw in Mitch Mitchell’s relentless triple meter jazz beat, and it’s no surprise this track had people wondering just what the heck they’d listened to.

Not only was this song musically experimental – as many Hendrix songs were – it showed avenues into how a group of musicians can pursue experimental elements in their own compositions.

The watery wah-wah riff of “Voodoo Child” stands up beside Deep Purple’s “Smoke on the Water”, Cream’s “Sunshine of My Love”, and Guns & Roses’ “Sweet Child of Mine” as one of the most recognizable guitar licks of all time.

And considering what follows is a masterclass in merging lead and rhythm guitar playing, it’s no surprise that this track changed the way even established artists were approaching their instruments.

The opening riff of “Castles Made of Sand” is one of my absolute favorites, but there’s a special place in my heart and the annals of music history for the lyrics too.

Although “The Wind Cries Mary” plays out predominantly in the major key, an unmistakable melancholy pools about the notes as Jimi tells his mournful stories.

Inspired by an argument he and his then-girlfriend Kathy Mary Etchingham had over lumpy mashed potato, it bleeds the kind of sadness you know is only temporary but still leaves you feeling lower than low.

“Bold as Love” is one of the best examples of Hendrix’s effortless virtuosity.

While running through insanely tricky chordal manipulations, he tells a wordy story almost as intricate as his guitar playing, all while keeping things very musical.

His guitar work on this track revised the blues blueprint for the modern era, but being that he was also fronting the band, it set the bar at a new level in terms of what was physically achievable by humans in the musical sphere.

To me, “Little Wing” perfectly encapsulates what Jimi Hendrix was all about. It’s his version of Munch’s “The Scream” or Picasso’s “Guernica”.

Rife with little ear candy guitar licks that make his simple chords harder to play than any solo, this is the song that guitarists start learning in their first year of playing and don’t master until they celebrate their aluminum anniversary with their instrument.

With its slow pace, super melodic guitar solo, and focus on the feminine ideal, there’s no question that “Little Wing” is a ballad, but even as it slides into this musical category, it seems to completely turn it on its head.

Perhaps it’s Jimi’s perpetually shifting chord voicings or Mitch Mitchell’s breathtaking fills when the music drops out, but “Little Wing” doesn’t feel so much like a ballad.

A dreamy meditation on a one-that-got-away scenario, this song is full of both hurt and acceptance, two moods that are usually the emotional equivalent of oil and water, but in “Little Wing” Hendrix defied the laws of physics by mixing immiscible sentiments and created something that feels utterly otherworldly, even today.

A trailblazer through and through, Hendrix’s fluid comprehension of the blues and melody made him a rare specimen… a music-forward virtuoso.

Even though he blew listeners’ minds time and time again, Hendrix wasn’t necessarily out to impress.

Jimi was just doing Jimi, trying to exorcize the musical thoughts surging inside him, which is why his songs hold a tension between technical chops and “listenability”, a combination that helped him remap the musical landscape forever.