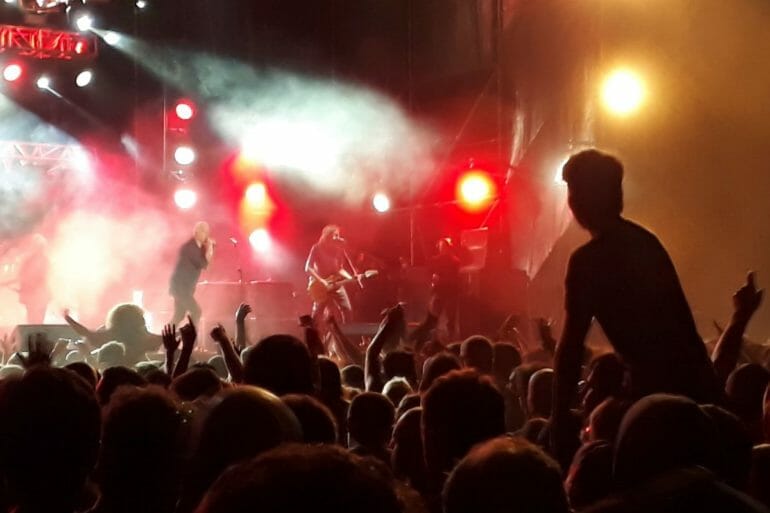 More than a mere drummer, Led Zeppelin’s John Bonham was an animal whose wild, off-the-wall beats breathed heart, soul, and intrigue into every song. When he passed away in 1980, the pulsing, rhythmical heart of the legendary rock band died with him.

His drumming style was the perfect match for the driving riffs of Jimmy Page, the bestial wail of Robert Plant, and the understated bass virtuosity of John Paul Jones.

Such was this man’s impact as a musician that, instead of searching for a new skins man, Zeppelin decided to call it quits, reuniting sporadically in the future to play only a handful of shows.

At the time of John’s death, his son, Jason Bonham, was already a monster drummer, but, as he was only 14, wasn’t a suitable candidate to join the band in a professional capacity.

However, when the three surviving members of the band did eventually reunite for the first time in 1995 in order to jam their way into the Rock and Roll Hall of Fame, they eschewed Jason Bonham and hired Michael Lee to play the skins instead.

In a recent interview, Jason admitted this was a devastating blow.

The Snub Show: What Went Down At The Rock And Roll Hall Of Fame?

It would have been the honor of Jason’s life to celebrate his dad’s life and posthumous achievement by playing with the band that evening,

What’s more, sprinkling a generous amount of salt into the already bloody wound, it was no ordinary show! Led Zeppelin was to play a brief set with none other than veterans of the rock music pantheon, Steven Tyler and Joe Perry of Aerosmith fame.

Yet, the jaw-dropping rock pedigree that would be taking the stage that evening wasn’t the thing that really hurt Jason, but the fact that he had already accepted drum duties in both Robert Plant’s and Jimmy Page’s solo acts but was snubbed when the pair reunited.

Talk about leading someone on!

During his recent appearance on The Eddie Trunk Podcast, the now 55-year-old Jason Bonham gave a candid response when asked how being left out of the ‘95 lineup affected him, remarking:

I haven’t thought about that for a long time. I mean… you’ve been around Led Zeppelin all your life(…) and then when they actually got back together, that devastated me that they got Michael in to play drums.

That wasn’t a good time for me.

Jason then took a moment to think of a concrete reason why it had been such a trying moment of his life, explaining it wasn’t just him that was left wondering why he didn’t make the cut, but everyone else… and they weren’t afraid to ask him.

I was having to explain myself to people, ‘Why didn’t they get you, aren’t you good enough?’.

I had a good conversation with Robert about that many years later. I said that it was a really tough time for me to understand …

And he had a very good reason why they did what they did.

Unfortunately, Jason didn’t divulge Plant’s “very good reason”, but no matter what it was, Jason still got a pretty raw deal if you ask me!

Who On Earth Is Michael Lee?

If you’re anything like me, when you heard that Led Zeppelin had recruited Michael Lee instead of the obvious choice, Jason Bonham, your first thought was… Who?

Considering the fact that Lee’s father wasn’t one of the most celebrated drummers of all time, it’s no surprise he wasn’t a household name, but he was an exceptionally accomplished musician, who, much like Jason, had worked with both Page and Plant on their solo material.

Between 1994 and 1998, he was also the Zeppelin duo’s drummer of choice for their Page and Plant side hustle, which is likely a big part of the reason he was selected to play drums for Led Zeppelin at the Rock and Roll Hall of Fame show.

Although this was perhaps his most notable gig, throughout his career, Lee played for some of the all-time greats, including The Cult and a reformed Thin Lizzy.

Was Jason Bonham At Least Invited To The Ceremony?

Jason was indeed one of the guests at the induction ceremony and the subsequent Led Zeppelin show and was even pictured alongside his sister, Zoë Bonham, and the surviving members of Led Zeppelin.

In the shots, he’s wearing a big smile, but as we know, it was masking a lot of negative feelings churning beneath the surface.

Of course, all this tumult eventually had a happy ending, with Jason finally inheriting his father’s throne behind the Led Zeppelin kit when they reunited in 2007.

He spoke of how blessed he felt to be around Robert, Jimmy, and John Paul, and to be a part of the legendary act when they took to the O2 Arena as part of the Ahmet Ertegun Tribute Concert.

And there was a lot of talk about possibly going on, but at least I got to do it one more time, and in an environment where it was done really well.

I always thought that if opening night was like that, what it’d be like after we did 20 shows? It would’ve been on fire.

He also mentioned that thanks to his tribute band, Led Zeppelin Evening, his musical impersonation of his father is tighter than ever.

Since then, I’ve probably done 150 shows playing that music, so I know I’d be better, but no, I let it go; that’s up to the gods.

I’m just glad to be out back working again and playing.

Jason’s performance at the one-off 2007 reunion show was unanimously described as flawless by critics, so it’s hard to imagine he’s gotten even better at playing our favorite Led Zeppelin songs, but alas, we may never get to see Led Zeppelin perform again… outside of our dreams at least.

It saddens me to say, but it seems like any form of enduring Led Zeppelin reunion in the future is off the table.

Robert Plant has never minced words when speaking about the possibility of the band returning for good, even though Jason is ready and willing to step into his father’s shoes.

The prodigious drummer explained in an earlier interview on radio show 98.7 The Gater why, not just Robert, but all three surviving members have hang-ups about continuing Led Zeppelin without his father.

It wasn’t just him going ‘I don’t want to do it,’ there were other things going on … He told me, ‘It doesn’t matter how great you are on the drums, Jason. I love you to bits, and you play absolutely amazingly.

But John was the drummer of Led Zeppelin, and John was a part of me and Jimmy and John Paul.

We shared something very, very special.’

It’s clear that the surviving members of the band believe Jason to be a fantastic musician in his own right, which is of course a lovely compliment, but it’s also part of the problem… Jason isn’t John, and as far as Robert, Jimmy, and John Paul are concerned, that means there can be no more Led Zeppelin.

Still, if the guys ever decide to do any more solo work, he may well get the first right of refusal, as it was only recently that Page posted on social media about his ‘88 Outrider album and tour, listing Jason as a studio session and touring member of the band.

Where Was Michael Lee During The 2007 Led Zeppelin Reunion?

Where was Michael Lee during this chapter of the Led Zepp chronicles?

Well, in 2006, he was attached to Ian Gillan’s project, Gillan’s Inn, and likely had a few other projects locked and loaded in the chamber too, but sadly, Lee died in 2008 after suffering a fatal epileptic seizure in his flat.

Placing yourself in Jason’s shoes, you can really get a feel for how much it hurt to be left out of the ‘95 reunion show, and that another drummer got to perform on the day his father was being inducted into the Rock and Roll Hall of Fame.

Still, he (and the rest of us) can all take solace in the fact that he took his rightful place behind the drums in 2007 and absolutely killed it! — John was no doubt smiling down on his son that day!

To watch the band in action with Jason Bonham doing his father proud, check out the video below from the official Led Zeppelin channel.

Kashmir is one of my favorite tracks of all time and hearing the intro never fails to give me the shivers.

Until next time rockers. Be kind to yourselves, and each other.