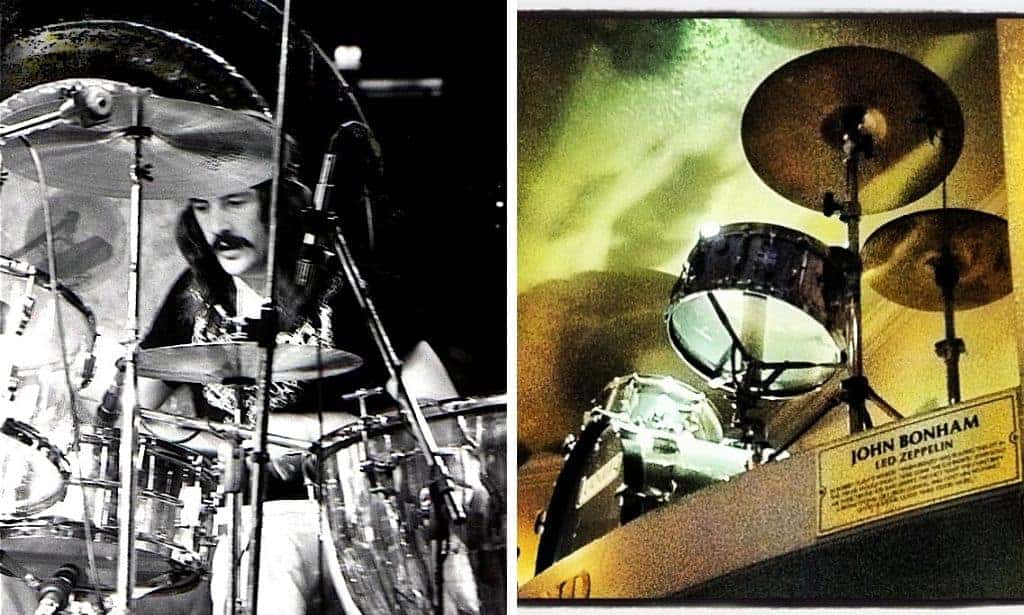 The importance of Led Zeppelin’s John Bonham is simply unmeasurable. The band catapulted onto the music scene in 1969. Their ferocious and wild style of rock ‘n’ roll redefined the genre forever. Eventually taking them to the top and becoming one of the biggest rock bands in history.

Although every member of Led Zeppelin was extremely talented, for me John Bonham stands out the most. He was the force behind their powerful sound and laid down a strong foundation that even the biggest earthquake couldn’t break.

“Good Times Bad Times,” the opening track in Led Zeppelin’s 1969 debut self-titled album showcases some of Bonzo’s early mastery. For many, this would have been their first taste of Led Zeppelin and John Bonham’s distinct style. And what a taste it would have been!

Throughout the duration of the song, Bonham accents the beat with triplets (three notes played inside another note length) on the bass. Most of the drummers during this time such as The Rolling Stones’ Charlie Watts and The Beatles’ Ringo Starr kept their drumming tight and in-line with the beat.

This created a steady flow of drive throughout the track. In contrast, instead of playing the bass exactly on each beat, Bonham livens up the rhythm through his use of accented triplets creating a distinct groove to the song.

Apparently, Led Zeppelin’s John Bonham was largely influenced by various jazz and 60’s Motown drummers such as Joe Morello, Elvin Jones, Clyde Austin Stubblefield, and Buddy Rich. You can hear a lot of rhythmic similarities between them. Similarities are also noticeable in funk music, where apparently Bonham studied syncopated grooves used by the likes of James Brown.

What made Bonham stand out was that very little drummers had transferred this style of drumming into the rock world. In songs such as “Heartbreaker,” he sporadically accents the bass drum altering the flow of the music bar. In this song, it creates an easy-going rhythm which helps the band cohere together and produce an all-around powerful groove.

Another aspect of Bonham’s playing was his ability to play hand in hand with lead guitarist Jimmy Page.

This is especially noticeable in songs such as “The Wanton Song” and “When The Levee Breaks.” Through Bonham’s following and playing in with Page’s guitar riffs, it further solidifies and electrifies the band to new levels.

As Led Zeppelin played increasingly complex musical arrangements, the band’s understanding of each other became more and more vital. In one of their most famous songs, “Kashmir,” the band mixes the time signatures between the drums and the guitars perfectly.

In this case, the drums and guitars only sync occasionally on a stronger beat. In doing this, Zeppelin creates a kind of edginess and full-on feeling to the song.

It’s important to note that when mixing time signatures like this, the band needs to be spot on rhythmically with John Bonham, requiring a high level of coherency. Without this understanding, it would sound disordered and messy.

I think that’s one of the things that Led Zeppelin did the best, they played so precisely together it created a very strong groove that just makes you want to move. John Paul Jones, bassist and keyboardist of the band, named this feeling a ‘Stomp Groove.’

Without Bonham’s steady and methodical playing the overall sound could easily turn into a disorder. This is especially noteworthy in one of their most complex songs by them, “Fool in the Rain.”

The song has a polyrhythmic beat where two different rhythms develop together. Led Zeppelin’s John Bonham does this by playing solid triplets on the hi-hat. Where he opens and closes the hats on different notes for added significance.

He accompanies this with ghost notes on the snare drum. Simultaneously, Bonham plays a swing beat (half-time shuffle) on the bass and snare drums. All together with the piano and guitar, it creates a groove that is difficult to sit still to.

All in all, Led Zeppelin’s John Bonham was an exceptional drummer who was extremely vital to their mastering of complex yet groovy music. They would have had nowhere near the success without the foundation laid by one of the greatest drummers of all time.