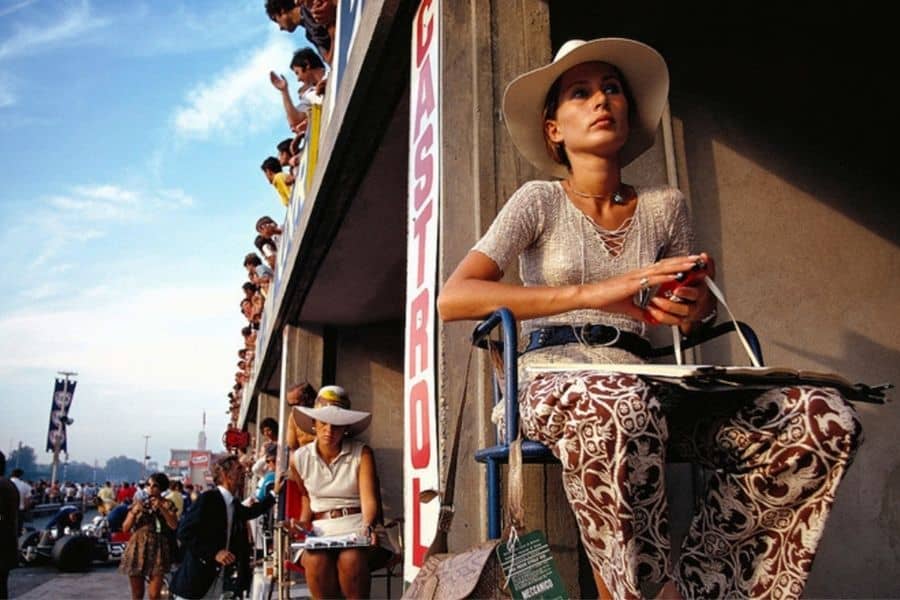 Although initially educated in Finland, Nina Rindt was sent to a boarding school to complete her education. This school was in Montreux in Switzerland.

Her poise and beauty allowed her the opportunity to become a fashion model. In the 1960s her career took her to assignments in cities like London, Paris, and New York. All of these cities were important as centers of fashion.

During this time in her life, she became friends with the British fashion model Twiggy. This was an exciting and glamorous time for fashion models, allowing them to enjoy busy but high-profile careers.

Nina’s connections in the motor racing world, together with her status as a top fashion model made her one of the most glamorous women of the period. It is no surprise, then, to learn that in 1967 she married a top racing driver.

Jochen Rindt had already established himself as one of the best young racing drivers at this time. They were a golden couple, and the newspaper society columns followed their lives with great interest.

Jochen Rindt was born in Germany, in Mainz, but was brought up by his grandparents in Graz, Austria. Throughout his racing career, he competed under Austrian colors.

The couple lived in a villa on the shores of Lake Geneva. Jochen and Nina Rindt both took a great interest in the design of the villa, that was built for them.

In 1968, their daughter Natasha was born. Happiness was short-lived, however, as in 1970, at just 28 years of age, Jochen was killed while practicing in Monza for the Italian Grand Prix.

He had won enough races that season to be named World Champion. He remains the only posthumous Grand Prix champion. Nina accepted the award on his behalf. The ceremony was held in London in November. The trophy was presented to Nina by Jochen’s great friend, Jackie Stewart.

In the year 2000, Jochen Rindt was celebrated in his home city of Graz on the 30th anniversary of his death. A plaque was unveiled in the city, and both Nina and her daughter Natasha were present to witness the moment.

Natasha Rindt has continued her father’s link with motor racing. She initially became involved in sports management, particularly during the 1992 Winter Olympic Games at Albertville in France. Subsequently, she has worked for the Formula One Group as a director. Her daughter, and therefore Nina’s granddaughter, is named India.

Two years after Jochen’s death, Nina Rindt remarried, taking as her new husband Philip Martyn, who was British. Philip Martyn was a friend of racing driver Jackie Stewart and reputedly earned his living as a professional gambler.

Nina’s second child was born to this marriage, a daughter named Tamara. Philip and Nina separated soon afterward, and in 1979, Nina married for the third time. Alexander Hood, Viscount Bridport, came from Scotland, and in marrying him, Nina became Nina Hood, Lady Bridport.

Together he and Nina had a son, also named Alexander. Since their divorce in 1999, Nina has largely avoided the limelight.

However, Nina Rindt is remembered for her devotion to her husband’s racing career and her willingness to sit trackside timing his laps. As a former model, she was renowned for her sense of style and easy approach to fashion.

Nina was the epitome of a casually elegant style. The 1960s was a time of dramatic changes in popular fashion. Nina embraced those changes and adopted new styles. For women, this was denoted by loose clothing, large hats, and bold colors.

Nina Rindt often wore a lime green hat that she favored as an accessory. She matched this with colorful patterned t-shirts and loose high-waisted trousers. The whole look was topped off with large sunglasses. Nina was in every way a leader of fashion.

Nina’s command of fashion extended beyond the casual outfits that suited her role as a trackside timekeeper. For formal occasions, once again, her sense of what was appropriate guaranteed she would dress elegantly and with panache.

When timing laps, Nina used an orange Omega stopwatch. For personal use, however, she favored a Universal Geneve Compax watch. At 36mm diameter, this was a large watch by the standards of the 1960s.

Women’s watches were usually smaller and much more dainty. A 36mm watch was more likely to be seen worn by a man. This did not in any way deter Nina from wearing the watch, nor from pairing it with a wide strap that held the watch away from her skin.

There has been some conjecture as to why she would wear this type of large strap with a large watch. Some people have to cope with higher levels of static electricity in their bodies, and this, in turn, can cause watches to malfunction.

It is likely, then, that Nina Rindt suffered from higher than average static electricity. A wide strap of the type that Nina used serves to keep the metal watch away from her skin, and so prevents problems. The Universal Geneve Complex has been dubbed the ‘Nina Rindt’ since she made it her part of her look.

Famed for being able to wear any style of headgear with aplomb, Nina personified the chic, cool 1960s bohemian look. Even when dressing down, she was immaculate. Understated, simple, practical clothing said much about her approach to life.

In 2011 the Italian sports newspaper La Gazzetta dello Sport named Nina Rindt as the most beautiful Formula One wife of all time. She has also had a dessert named after her at the Restaurant Cosmos in Helsinki. The dessert is described as a “frozen chocolate and cheesecake-like Nina Lincoln”.

The Finnish Women’s magazine Kotiliede included the recipe in its Great Bake Off in 1987. Surely fame cannot bring a greater reward than to be named after a cheesecake recipe?

Although she has avoided public appearances in recent years, Nina Rindt is still remembered as one of the most stylish women to have appeared on the catwalk and graced Formula One.