15 Amazing Sting Songs We Love To Listen To 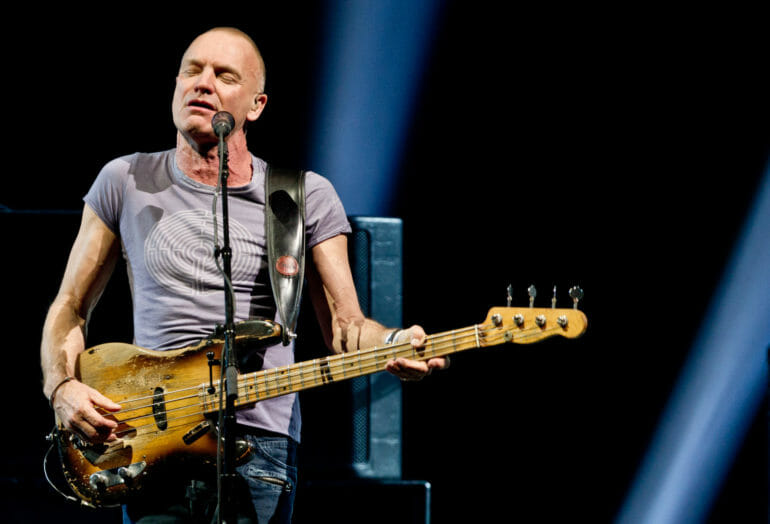 When we think of Sting, it’s hard not to think of him in association with his band The Police, and considering the amazing songs this group put out, that’s understandable.

However, Mr. Sumner didn’t just call it a day when The Police decided to go on hiatus. Nope, he got straight to work writing solo material.

As it stands, Sting has a whopping 15 solo studio albums under his belt — Shocking, I know!

It’s possible that many have gone their whole lives without realizing that he has a solo output at all.

Not to worry, though, for as intimidating as finding out about 15 albums at once can be, you have me, your Sting Sherpa, to guide you song to song through 15 of Sumner’s biggest solo triumphs!

For all his mainstream success, Sting doesn’t half focus on tragedy and the darker aspects of existence, especially when he was cutting his teeth as a solo artist in the mid-80s and early 90s, but compositionally, “All This Time” marked a temporary ascendance into levity.

Don’t get me wrong, the lyrical content is still pretty gloomy (“I… saw the sad shire horses walking home in the sodium light”), unafraid to confront death head-on (“Two priests came ‘round our house tonight / One young, one old, to offer prayers for the dying / To serve the final rite”).

Yet these maudlin undertones are painted in unabashed pop aesthetics, tricking the listener into a good time but offering plenty of substance to chew on if they dare analyze the darkness seething beneath the pretty pop facade.

By the turn of the decade, Sting had long since given up his pop star infamy and settled willingly into a more artsy, contemporary musical mold.

Then again… perhaps “mold” is the wrong word, as his approach to music is anything but fixed in place, as evidenced by “Desert Rose”, a collaboration with Algerian singer extraordinaire, Cheb Mami.

Cheb’s silken vocals are what reach out and grab your attention in “Desert Rose”, but it’s Sting’s hook-writing proficiency that holds you securely in place, imprinting line after line into your long-term memory whether you like it or not.

Sting flexes his romantic poetry chops in “Fields of Gold”, arguably his most ubiquitous solo song of all 15 albums bearing his moniker.

Lyrics like “You’ll remember me when the west wind moves upon the fields of barley” and “In his arms she fell as her hair came down / Among the fields of gold” transport you to an idyllic rural landscape and conjure sun-bleached memories of passion and love.

In a way, “Fields of Gold” is an homage to English folk songs, with Kathryn Tickell’s Northumbrian pipes underscoring this fact, but the sweet, airy bed of synthesizers brings the traditional aesthetic tastefully into the modern musical landscape.

Admittedly, Sting’s first solo effort, The Dream of the Blue Turtles, went a little off the deep end, with try-hard lyrics jarring awkwardly against Jazzy backdrops.

Needless to say, it all gets very fatiguing, but “Fortress Around Your Heart” is a true diamond in the rough track that defibrillates the record.

Using a fortress siege as an apt and original metaphor for love, the narrator wrestles with his failings in his relationship, requesting his beloved “Help me [the narrator] build a bridge / For I cannot fill the chasm / And help me set the battlements on fire”.

Abstract though it may be, unlike most of the other cuts on this record, “Fortress Around Your Heart” is an honest story brimming with raw emotion. It cares not for preaching or pretentious attempts to redefine love… it just is.

Although “Fragile” is about a specific event in which a Peace Corps volunteer was murdered in Nicaragua in 1987, Sting’s ability to tap into universities in his lyrics has led to it being chosen as a tribute to numerous tragedies, from 9/11 to imminent environmental collapse.

Both mournful and humbly grateful in tone, “Fragile” reminds us of the fleeting nature of life and that we should all treasure what we have in this world.

This Grammy-winning track indulges in heartbreak to the extreme, exclaiming that “If I ever lose my faith in you / There’ll be nothing left for me to do”, hinting at an all-consuming relationship that has, in effect, erased the lovers as individuals and cast them as one.

Whether you believe the lyrics in “If I Ever Lose My Faith In You” to be overly dramatic or not, from a purely musical standpoint, it’s a glorious triumph.

RELATED: What Is Sting’s Net Worth?

You already know my feeling’s on Sting’s first solo record, but credit where credit’s due, the opening track “If You Love Somebody Set Them Free”, is a slap, through and through.

Eric Clapton has done a pretty sterling job of destroying his legacy with his recent comments in the press, which is a damn shame because said legacy includes “It’s probably Me”, a dynamite collaboration between old Slowhand and Sting for the movie Lethal Weapon 3.

As you might expect, the song delves into the whole male-bonding aspect at the heart of the buddy cop genre, depicting that late and lonesome hour in which you need your best buddy to get your back and cheer you up.

In theory, a corporate pairing such as this – for a threequel no less – shouldn’t work, but thanks to some organic musical chemistry between the yolked parties, “It’s Probably Me” is a fantastic tune.

As a former teacher of literature, it was inevitable that Sting would eventually wrestle with one of the most significant pieces of writing in Western history.

Referencing the story of Lazarus, Sting offers a spiritual-musical reimagining of the old what doesn’t kill us makes us stronger adage, presenting it in a polished pop package.

“Mad About You” once again sees Sting dabble in Middle Eastern musical aesthetics, a habit you can hear developing as far back as his tenure in The Police.

The lyrics place you “a stone’s throw from Jerusalem” – thereby legitimizing the Middle Eastern leanings as thematic – and tell the story of an all-powerful King who has all the material delights in the world but suffers from lack of the one thing that gives us sustenance… love.

Propped up by a surging, forceful instrumental, this cut is a high-drama expose focused on the pitfalls of materialism and capitalism.

If Sting has one downfall, it’s taking himself and his art far too seriously at times, but thankfully, even though “Seven Days” recons with the cracks beginning to show in a relationship, there’s humor, and dare I say, cheekiness to his approach.

The protagonist is given a bottom line by his beloved… vow to commit within the week or it’s over, which I think we can all agree sounds like the premise of a Judd Apatow romcom starring Seth Rogan.

Sting has shown a flair for lyrical storytelling as far back as “Roxanne”, but not until “Shape of My Heart” did he come close to yarn spinners such as Dylan and Springsteen.

Like the work of these two greats, Sting’s story of a gambler philosophizing over luck, success, and single-minded dedication is engaging as a narrative while also harboring an undertow of universalities the listeners can tap into in order to learn more about their own existence.

“Shape of My Heart” shows Sting searching for answers rather than offering them, which, it turns out, is when he’s at his best!

RELATED: The Best Stevie Nicks Songs Of All Time

“They Dance Alone” was the first time Sting and Clapton worked together, and Mark Knopfler came along for the ride!

Yet, despite the star-studded credits on this track, it has Sting’s sonic signature all over it, which is a testament to his artistic vision and musical presence.

At this point in time, Sting was well into his white savior phase, but thankfully, in “They Dance Alone”, he avoids the heavy-handedness that plagues some of his other “awareness” tracks.

The story in the lyrics is specific and imaginative enough to show a genuine understanding of Augusto Pinochet’s regime and a heartfelt desire to help.

Although Sting himself admitted “When We Dance” was an attempt to squeeze his solo style into a radio-friendly package, I can’t be too mad at this conscious attempt to sell out as it’s such a gorgeous track.

Besides, it’s nice to hear Sting’s take on an honest-to-goodness love song!

“Why Should I Cry For You” is a heartbreaking meditation on father-son relationships both before and after one of the two leaves this worldly plane.

The smooth, droning bass mimics the timbre of a ship’s fog horn – a reference to his father’s role in the shipbuilding industry of Newcastle, England – and the sparse, twinkly guitar wheels above this musical juggernaut like the zodiac in the night sky.

On this sonic voyage, Sting is haunted by “dark angels” as he struggles to find closure in a relationship severed by death.

It’s an incredibly slick, smooth song, yet impassioned lyrics such as “I loved you in my fashion”, present an X-ray image of its body, revealing the fractures and turbulence beneath the surface.

As a solo musician and a member of the Police, Sting received an unbelievable 17 Grammy Awards, including Song of the Year for “Every Breath You Take”. H also won three Brit Awards, a Golden Globe, an Emmy, and four nominations for the Academy Award for Best Original Song.

With such prolific output, it was hard to narrow down the best of his work to only 15 songs. How do you think we did?