The Top 10 Best KISS Songs Of All Time! 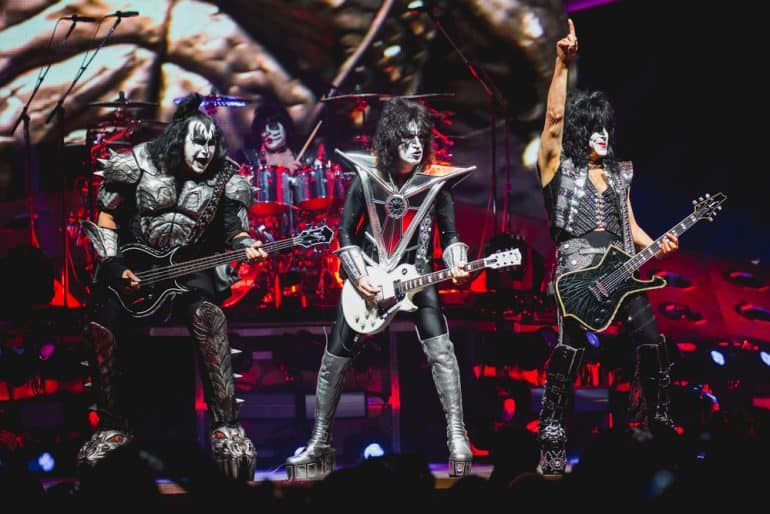 Rock is about finding who you are. You don’t necessarily have to play your instrument very well at all. You can just barely get by and you are in a rock band. – Gene Simmons

Rock and roll and hard rock in the nineteen seventies and eighties belonged to KISS.

They were in the right place at the right time and had that indescribable and impossible to capture “wow” factor that endeared them to fans all over the world.

They were the biggest band in America, and even when they made the decision to unmask and remove their make-up, it didn’t slow the hard-rocking New York juggernaut down, and they just kept on rolling through stadiums and selling more records than ninety-nine point nine percent of bands could even dream about.

They were and are worshipped by the KISS army, which makes trying to choose the top ten best kiss songs an almost impossible task.

How do you condense five decades of genre-defining rock and roll history into just ten songs? And how do you choose between the anthems that the Demon, the Starchild, the Cat and Space Ace Frehley created during the seventies and the hard-rocking, instantly catchy classics that the band liberally sprinkled through the next thirty years of their unstoppable career?

But as KISS recently announced the last dates on their ‘End of the Road’ tour, and are about to embark on the final stage of their remarkable fifty-year journey, we thought that it was time to honor one of the greatest bands in rock and roll history, with a top ten list of songs that highlights why KISS sold more records, tickets, pinball machines and shirts than any other band in the world, and why they are, according to Gene Simmons, “the greatest band on Earth”.

Is this really the “End of the Road” for KISS? Who knows, after all, they’ve said that they were going to retire before, but their fans won’t let them, so the chances that they’ll finally hang their guitars up for good when the lights fade at the end of their, for the time being at least, last show aren’t in the band’s favor, and we wouldn’t want to bet that this is the last time that we’ll see a KISS show.

But just in case it is the last time that we’ll get to see the Demon and the Starchild strut across a stage like the King(s) of the Night Time World, we wanted to make sure that we raised the horns high and shouted out loud that we’re still, and always will be, true believers and loyal members of the KISS army.

You wanted the best, you got the best…

It seems odd that this staple of KISS live sets and bastion of rock radio stations the length and breadth of the country failed to chart when it was originally released as a single in nineteen seventy-four.  Strutter was one of the stand-out tracks on the band’s debut album, and in the long and storied mythology of the band is still one of the only songs that Paul “Starchild” Stanley and Gene “The Demon” Simmons wrote together.

Strutter was originally called Stanley the Parrot and only assumed its new identity after Paul Stanley rewrote the lyrics to Gene Simmons song, and pushed it in the innuendo-laden, heavily sexualized direction that the band’s songs would become famous for.

One of those songs that became, and still is legendary among KISS fans because of its racy subject matter that details a sexual practice that was still seen as being taboo when the song was first released in ninety seventy-four, Nothing to Lose helped to cement the idea that KISS was the band that your parents warned you about.

Owing as much to the nascent Glam Rock scene that was led by David Bowie as the hard rock that had enchanted the youth of America, Nothing to Lose was the locker room tune that introduced a generation of fans to the band that “corrupted” and “bespoiled” the future leaders of big business and industry.

One of the mainstays of KISS’s early live sets, She was actually a remnant from Gene Simmons’s days as the bass player in Bullfrog Bheer, the band he was a member of prior to joining forces with Paul Stanley.  It was also one of the only songs that made it from the band’s days as Wicked Lester (the name they used before they became KISS), and was part of their live set throughout the seventies.

Even though their early live sets always seemed to include She, KISS didn’t actually record the song until nineteen seventy-five, when they included it on their third album, Dressed to Kill. And, stranger still, and for reasons known only to themselves, She disappeared from the KISS setlist for more than twenty years and wasn’t played live by the band in the eighties and nineties.

4. Rock And Roll All Nite

If you’ve ever tuned into and listened to a rock radio station, then you’ve almost definitely heard Rock And Roll All Nite. Released as a single twice, it initially failed to chart when it appeared in nineteen seventy-five, but when it was reissued a year later, Rock And Roll All Nite reached number twelve on the Billboard Chart.

Rock And Roll All Nite has become KISS’s anthem, and since it charted has been the song that the band use as their final encore at every show. As a statement of intent, it sums up the KISS philosophy perfectly, which is probably why Rolling Stone declared that Rock And Roll All Nite was the sixteenth greatest rock song of all time.

Another of KISS’s semi-legendary songs that any hard rock fan is more than familiar with, Detroit Rock City was the third and final single taken from the band’s fourth album, Destroyer. When it was released in nineteen seventy-six, despite widespread airplay, the song failed to chart, which was in part responsible for fueling the idea that while they could, and did sell millions of albums, KISS wasn’t a singles band.

And the incident that inspired the song? It didn’t actually happen in Detroit, and the band changed the names of all involved and the location in order to “protect” the innocent. Or so the legend goes…

There’s always an exception to the rule, and Beth was it for KISS. Composed and written by the band’s then drummer Peter Criss (the Cat), it was a last-minute addition to Destroyer but was also the band’s most successful domestic single, and reached number seven on the Billboard charts when it was released.

It’s also the source of a continued dispute between Criss and  Paul Stanley and Gene Simmons, as the band’s mainstays claim that they don’t believe Criss actually wrote the song, while Criss maintains that their animosity was, and is, fueled by jealousy as he managed to do the one thing that neither of them could. Write a hit single for KISS.

7. Shout It Out Loud

It seems like we’re leaning a little heavily on the band’s seventies back catalog, but we’re just following their lead, as the first single that was taken from Destroyer is still part of their live set.

Shout It Out Loud was the first KISS single to crack the top forty, and was also their first single to reach the number one spot, albeit in Canada. They’re still playing the song, and the fans, us included, are still singing along with them whenever they do. It’s a simple mantra, and one that we happen to believe in and endorse “Shout it, shout it, shout it out loud…”

Taken from KISS’s sixth album, and their first to enter the Billboard top five, Love Gun, the song of the same name has been played live on every single KISS tour since it was released. Paul Stanley wrote and arranged the song and has gone on record as stating that it’s his favorite KISS song and the one that he’s most proud of.  And yes, it is about what you think it’s about…

Heaven’s On Fire was released as a single in nineteen eighty four and is featured on the band’s twelfth studio album, Animalize. It wasn’t a mainstream hit, but it did introduce the band to a new legion of fans and is one of the only songs from their ‘unmasked’ era that they still play live.

Originally written and recorded by Argent in nineteen seventy three, KISS recorded their version of the song for the soundtrack to Bill & Ted’s Bogus Journey and it became an unexpected international hit for the band, buoyed by the box office of the film.

KISS was bowled over by the unexpected success of the song and later included it on their nineteen ninety two album Revenge, and to this day the band still plays it in their live sets.

We’re well aware that other members of the Kissnation and KISS Army won’t agree with our choices. In fact, we have to admit that there are a number of KISS songs we feel we have missed, but this is a top 10 list so we had to make some tough calls.

If you think we missed a classic or three, then feel free to drop us a line and tell us why you think we’re wrong, its open for discussion…