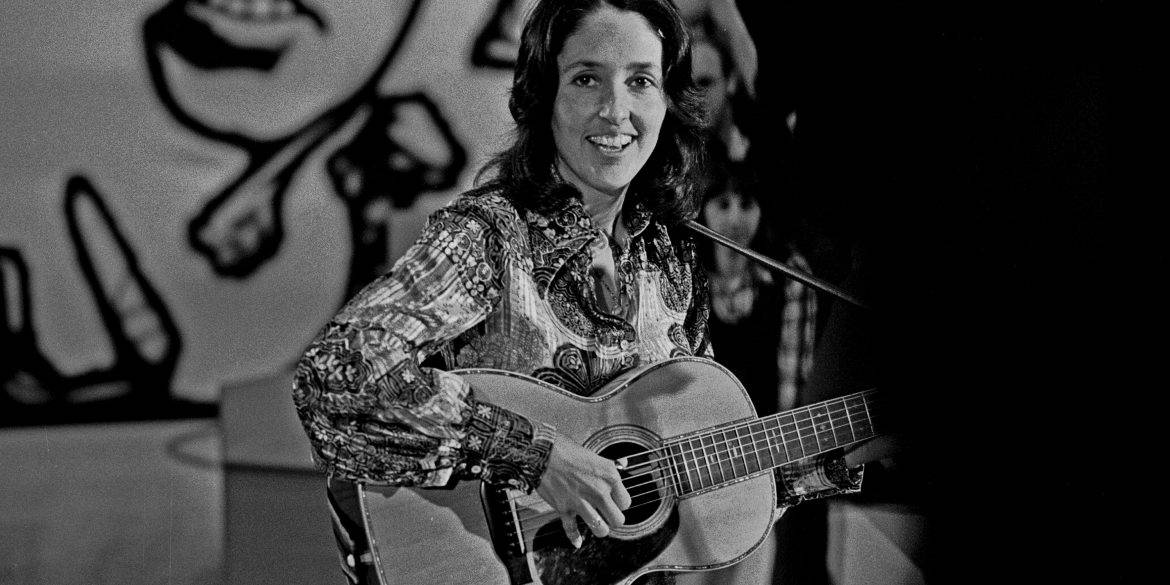 Our top 10 Joan Baez songs list dives deep into the music of an activist, inspiration, and queen of folk music. Joan Baez released her first self-titled album in the summer of 1960 when she was only 19.

Little did she know it would reach the top 20 and set her on a path of admiration by thousands. Whilst becoming an important influence for anti-war and social-justice movements during the 1960s. This post may contain affiliate links.

Originally written and recorded by American singer-songwriter Jackson Browne in 1974, “Fountain of Sorrow” was recorded by Joan Baez in 1975 and released on her album Diamonds & Rust. Placed directly after the album’s title track, Stephen Holden of Rolling Stone wrote about one of his favorite Joan Baez songs.

It develops parallel themes of sex and nothingness, fantasy and realism, as Browne, looking at the photograph of a former lover, recalls. In the chorus, highly romanticized sexuality becomes a ‘fountain of sorrow, fountain of light.’ Later in the album the water images are developed into a larger metaphor for death and rebirth.”

Written by Bob Dylan in 1962, “Blowin’ In The Wind” is one of the numerous Joan Baez songs that are Bob Dylan covers. Bob Neuwirth, a folk contemporary of Dylan and Baez stated.

Dylan’s songs blew people’s minds, and when Joan started interpreting them, it went to another level, they should give her the [Nobel] Prize!”

8. There But For Fortune

“There But For Fortune” is a song written and recorded by American folk artist Phil Ochs in 1963. In October of 1964, Joan Baez recorded the song for her album Joan Baez/5.

The single became a top ten hit in the United Kingdom, yet only reached number 50 on the Billboard chart. Her voice is stunningly beautiful in this track, emitting a powerful message of avoiding undesirable fate.

“Long Black Veil” is a country ballad written by Danny Dill and Marijohn Wilkin and recorded by Lefty Frizzell in 1959. The song depicts a man falsely accused of murder who is later executed. He refuses to state his alibi because it would reveal the affair he was having with his best friend’s wife on the night of the murder.

The song has become a folk, country, and rock standard with covers from artists such as Bruce Springsteen, The Band, Dave Matthews Band, and Johnny Cash. This is one of our favorite Joan Baez songs, so hauntingly beautiful.

“Farewell Angelina” was written by Bob Dylan during the mid-1960s. Dylan sought to record the track during the first session of recording for his 1965 album Bringing It All Back Home, however, gave up.

Instead, Baez recorded the song for her 1965 album Farewell Angelina. Although only half as long as Dylan’s version, this masterpiece is the only Joan Baez song which we think is better than Dylan’s version!

The history of the song “Silver Dagger” is relatively unknown. Most sources suggest that the American folk ballad originates from England, possibly during the Victorian era. The song describes the tale of a female who rejects her potential suitor on the basis of warnings from her mother.

Baez’s version of the song features only part of the full ballad. Released on her debut self-titled album in 1960, the song’s stretching intervals and sustained notes provide an exquisite showcase of her evident soprano and skillful vibrato.

Written by Bob Dylan in 1962, “Don’t Think Twice, It’s All Right” was released on his 1963 masterpiece The Freewheelin’ Bob Dylan. The album catapulted Dylan into stardom, showcasing his true song-writing capability.

Another one of the many Joan Baez songs written by Dylan, her version is truly heartfelt. Her supreme vocal command of the song convinces the listener she’s thinking of Dylan when singing it.

Originally written as “Dona Dona,” the Yiddish language folk song was written by Sholom Secunda and Aaron Zeitlin in 1941 about a calf being led to a market to be slaughtered. The song was later translated in the mid-1950s and recorded by Joan Baez in 1960 for her self-titled album, changing the name to “Donna Donna.”

Again, it’s another one of Joan Baez’s songs that combine her beautiful yet haunting voice to deliver a powerful and dark story. The song became a standard for Baez and was used throughout the human rights movement of the 1960s.

2. The Night They Drove Old Dixie Down

“The Night They Drove Old Dixie Down” was written by Robbie Robertson and recorded by a Canadian group, The Band, for their 1969 eponymous second album. Joan Baez’s version of the song was released in 1971 and became significantly more successful, reaching number 3 on the Billboard chart.

Her version creates an almost singalong feel, with her powerful voice accentuating the song’s memorable melody.

“Diamonds & Rust” is one of the best original Joan Baez songs. It was written in 1974 and released as the title track on her 1975 album Diamonds & Rust. The song alludes to Baez’s 1960s love affair with Bob Dylan.

In an interview with The Huffington Post, Baez admits the song is about a time when Dylan called her from a phone booth and sang her the lyrics to his song “Lily, Rosemary and the Jack of Hearts.”

Arguably one of the greatest love songs ever written and performed, “Diamonds & Rust” sits comfortably at the top of our Joan Baez songs list.