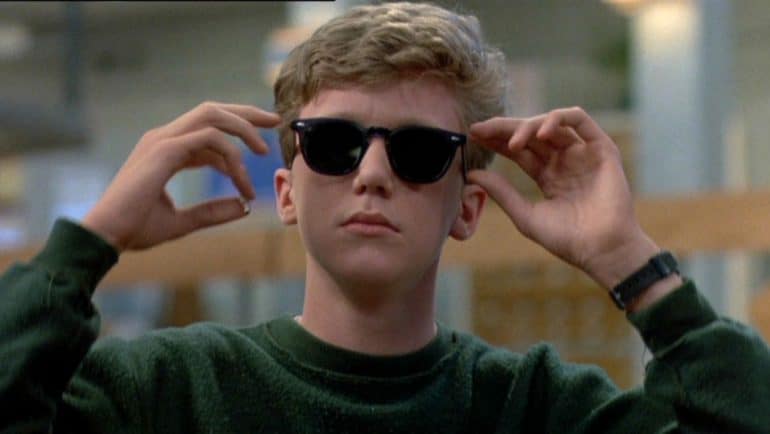 With a movie and TV appearance list long enough to break the internet, you’ve no doubt had Anthony Michael Hall flash across your screen at some point.

Who Is Anthony Michael Hall? Or Is It Michael Anthony Hall??

Born as Michael Anthony Hall on Easter Sunday, April 14, 1968, Michael adopted the performer name of Anthony Michael Hall as his career took off.

You might say that Anthony Michael Hall was the archetypal child star, and even destined for it.

Born to a showbiz mother, Anthony is the child of the blues & jazz singer Mercedes Hall, with his father, Larry Hall, an auto-body shop owner. He is of Irish-Italian heritage.

Mercedes & Larry Hall separated when Anthony was 6 months old, with Mercedes and Anthony eventually settling in New York where his child acting breakthrough was to occur.

Anthony’s foray into the bright lights of acting started at the ripe old age of seven, starring in commercials with his breakout role as ‘The Honeycomb Kid’, as well as picking up appearances for Bounty Chocolate and a few toy ads.

This start in commercials led to his first stage-acting appearance 2 years later in 1977 as a young Steve Allen in The Wake. His work here also saw him picked for a role in another play starring Woody Allen, as well a production of St. Joan of the Microphone held in New York’s fabled Lincoln Center.

The next rung on Anthony Michael Hall’s skyrocket to childhood stardom was his first screen appearance in 1980 as a young Edgar Allan Poe in the Emmy-winning TV movie, The Gold Bug.

Young Anthony was starting to get some attention and picked up further starring roles including Huck Finn as well as rave reviews for his performance in the 1982 Kenny Rogers Film, Six Pack – but 1983 was the year his life was really about to change.

In 1983, at the age of fifteen, Anthony Michael Hall landed a major role as the son of Chevy Chase’s character in the comedy smash hit National Lampoon’s Vacation. The movie was a breakout hit, making over 60 million dollars at the US box office.

His performance also caught the eye of screenwriter and budding director, John Hughes, who is quoted as saying “For [Hall] to upstage Chevy, I thought, was a remarkable accomplishment for a 13-year-old kid”.

This was the beginning of a professional relationship that would arguably create the foundation for both men’s careers.

John Hughes was the writer for the National Lampoon screenplay and was planning his first foray into directing when he met Anthony Michael Hall.

After working alongside him on National Lampoon, Hughes cast Hall as the geeky Farmer Ted in his directing debut and teen drama Sixteen Candles.

Anthony’s starring role alongside Molly Ringwald turned them both into teen sensations, and his affectionately geeky character proved an inveterate scene-stealer.

John Hughes has since stated that the “geek” or “nerd” archetype which Anthony frequently played was in fact based on Hughes himself.

The next Hughes movie, The Breakfast Club was released in 1985 and gave Anthony Michael Hall another starring role, and it proved to be a significant hit.

This movie is regarded by many as Hall’s career-defining piece with himself and co-star Molly Ringwald considered the ‘standout performers’. Ringwald and Hall dated for a short time after The Breakfast Club wrapped up.

John Hughes “teen trilogy” was completed with the movie Weird Science – released in the same year as The Breakfast Club .

Hall again played a ‘bratty bright kid’ character by the name of Gary Wallace and had well and truly cemented his position as the loveable nerd of the 80s movie scene, whether he liked it or not.

Hall then began to steer away from working with Hughes after this in an attempt to cast off the stereotype he’d developed. Hughes had written specific roles for him in his 1986 productions –  Ferris Bueller’s Day Off and Pretty in Pink, however, Anthony turned them down.

There was no bad blood between them though with Hall giving Hughes immense credit for the rise of his career, quoted as saying:

I had the time of my life,” he said. “I’d consider [working with Hughes again] any day of the week.”

Largely due to this series of John Hughes films, the now-iconic “Brat Pack” was born.

The term was originally coined by New York Magazine journalist David Blum in an interview with Emilio Estevez to group the large posse of young actors that were in cahoots but much “younger, greener and brattier” than Frank Sinatra’s hard edge ‘Rat Pack’.

There is some dispute about what constitutes being a member of the Brat Pack but most people set the criteria as needing to have starred in one John Hughes film.

Check out this gem from the archive on the life and times of The Brat Pack kids:

A Year On Saturday Night Live

In 1985 Hall lived out one of his childhood dreams and became the youngest cast member in history to join Saturday Night Live.

He only performed with them for a single season but managed to take on some challenging characters, nail some great celebrity impersonations (including Art Garfunkel, Robert F. Kennedy, Edd Byrnes and Daryl Hall ) and star alongside the likes of  Randy Quaid, Joan Cusack, Terry Sweeney and Robert Downey, Jr.

In this short but jam-packed year on SNL, Hall undoubtedly made connections that led to much greater opportunities in his life (including becoming the eventual godfather to Robet Downey Jr’s son!).

While being a foundational moment for his career in many ways, Hall’s time on Saturday Night Live wasn’t without its disappointments, with him quoted as saying: ‘”My year there, I didn’t have any breakout characters and I didn’t really do the things I dreamed I would do,” he said, “but I still learned a lot and I value that. I’ll always be proud of the fact that I was a part of its history.”

By the mid-1980s, Anthony Hall had positioned himself as a huge star and ‘teen idol’, largely due to his roles in John Hughes first few hits.

Despite this success, he was wary of being ‘typecast’ by the Hollywood media and film audiences, and in1986 he turned down roles in further John Hughes hits Ferris Bueller’s Day Off and Pretty in Pink.

Instead, he opted for the action-thriller Out of Bounds, but this proved to be a misstep. The movie was both a critical and commercial bomb.

In 1987, Hall made what many still call another major misstep, losing out on the chance to star in Stanley Kubrick’s war epic Full Metal Jacket, eventually being replaced by Matthew Modine. There were many reports of bad blood between Hall and Kubrick but it seems like a breakdown in the financial negotiations were the main reason it didn’t go ahead.

The next few years wouldn’t exactly make his highlight reel either – working on the largely disappointing and critically-ridiculed Johnny Be Good with Uma Thurman and Robert Downey Jr. before spiralling into a reported drinking problem for a couple of years.

Never one to sit back ad wallow though, Hall made his return to the movie scene in Tim Burton’s Edward Scissorhands in 1990 – starring as the film’s villain opposite Johnny Depp and Winona Ryder.

Hall’s next movies were the beginning of his ‘rebranding’ as he set out to establish himself as a more mature actor. From this point until the present day, Anthony Michael Hall has starred in and continues to star in, many many popular films and TV shows, even extending his talents to music.

He has worked with some of the industries biggest and most prestigious names, but despite a filmography list as long as anyone, his legacy will always be those early teenage movie roles. In those John Hughes hits, Anthony Michael Hall proved himself to be the voice and icon of a generation.

This definitely doesn’t take away from his other accomplishments – grab a coffee and start scrolling as we list out his complete TV & Film credits:

With an estimated net worth of over 4 million dollars, he could probably take the foot off of the gas and live quite comfortably – but as you can see from his filmography above, Anthony continues to work steadily and successfully, starring in countless popular modern movies and TV shows and making his way through the world as an actor, director, producer and musician.

As of 2019, Anthony Hall was happily married for the first time to his War Machine co-star Lucia Oskerova and who now live together in Playa del Rey, California.

Long gone are the days of Anthony Michael Hall the child star, but his contribution to film, TV and music through the decades since has left an impressive mark on many viewers and listeners around the world, particularly those who grew up in the 80s idolising The Brat Pack