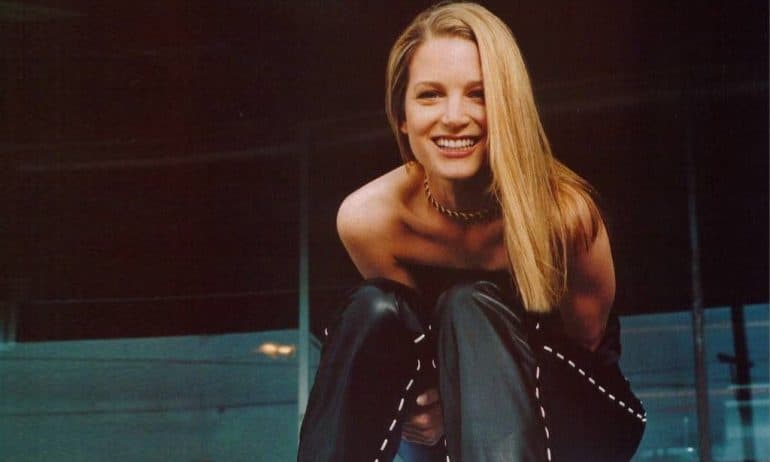 For Bridget Fonda, there was no escaping the limelight. Born into a renowned acting dynasty, her father, Peter Fonda, was an actor and renegade auteur, while her aunt Jane Fonda was an A-list megastar. And her grandfather, Henry Fonda, was a cinema icon.

Bridget had a somewhat unorthodox upbringing. She was born in January 1964, but her parents divorced when she was very young. She was raised by Peter and his new wife, Portia.

Her first screen appearance came at the age of five when she played the uncredited role of “child in a commune” in the counter-culture sensation Easy Rider. From that point, her fate was sealed.

Bridget began acting in school productions at LA’s Westlake School for Girls and underwent training at the famous Lee Strasberg Theatre Institute in New York City. There she learned the art of method acting, taught in the same hallowed walls as legends like Robert De Niro, Al Pacino, and Jessica Lange.

When she graduated in 1986, it wasn’t long before she landed her first role. It was in the experimental anthology film Aria in 1987. Bridget’s seven-minute segment evoked the high tragedy of the opera Tristan und Isolde.

Aria gave Bridget Fonda a non-speaking character which enabled her to demonstrate her physical expressiveness. But it was essentially a stop-gap until her first major role, which came the following year.

That was the unlikely role as Mandy Rice-Davies in Scandal, a movie about the Profumo sex scandal which rocked the world of British politics in the 1960s.

That same year she also appeared in two lightweight comedies, You Can’t Hurry Love and Shag, showing that she could handle the whole gamut of genres with grace and aplomb.

But it wasn’t until 1990 that Bridget Fonda really broached the mainstream with her appearance as a reporter in The Godfather Part III.

Though the film’s production was troubled and its critical reception far from stellar, it was nonetheless a box office hit. Bridget’s performance was one of the highlights.

Her appearance in The Godfather Part III led directly to her casting in the lead role of Allie in Barbet Schroeder’s Single White Female, which was released in 1992. The movie is a psychological thriller pitting Bridget against a psychotic Jennifer Jason Leigh.

It was a major hit, propelling both actresses to international fame and receiving positive reviews for both performances. That same year, Bridget Fonda also starred in Cameron Crowe’s ensemble comedy Couples.

Couples tapped into the generation X zeitgeist, featuring music and performances from grunge megastars Pearl Jam, Alice in Chains and Soundgarden, and serving as a prototype for the sitcom Friends.

Again, the movie did well at the box office and Bridget’s lead performance was singled out for praise. This film was also a rare occasion when she appeared alongside her partner Eric Stoltz, who features playing the role of a mime.

Bridget’s next major role came in 1993, in the Hollywood remake of the hit French action movie Nikita called Point of No Return. The central character is a hitwoman and mistress of disguise, a role that Bridget embraced with gusto. But she also brings a degree of pathos to the part, hinting at the anti-heroine’s hidden depths.

Again she attracted favorable reviews and decent box office takings. By this point, Bridget had effectively established herself as a movie star in her own right. She was more than capable of carrying a big-budget production on the strength of her talent and reputation.

1994 was a mixed year, cinematically speaking. It Could Happen To You was a romantic dramedy in which Bridget Fonda co-starred with Nicolas Cage. Though only a minor box office success, it received warm critical notices.

And Bridget’s last film of the year was Camilla, the penultimate movie to feature Oscar winner Jessica Tandy. It’s a road movie focusing on the two women traveling across the country together. It’s a warm and affectionate story with dignified, humor-filled performances from both stars.

Over the next couple of years, Bridget Fonda kept up her steady stream of cinema appearances. Of these, perhaps the most notable is 1996’s City Hall, a gripping thriller about politics and corruption starring Al Pacino.

Bridget gives a strong supporting performance as a principled legal aide, eager to root out the bad apples in the political system. The film attracted favorable reviews, and also did moderately good box office business.

Arguably, 1997 was a more significant year career-wise for Bridget Fonda. It brought her a role in the Quentin Tarantino movie Jackie Brown.

Meeting Tarantino purely by chance on a flight, the two got talking and he swiftly offered her the part of hippie chick Melanie, a love interest for Samuel L. Jackson and Robert De Niro.

Jackie Brown is one of Tarantino’s finest movies, but also his most underrated. Bridget fits neatly among a dazzling ensemble in this slick, stylish thriller packed with twists.

“Quentin was great. I’m crazy about him. The way he is defies definition. He has a finer-tuned engine than most people-he runs at a higher RPM. Most people in this business got in because it’s something they were dying to do, but because of all the harsh knocks, that love has faded. Quentin is a refresher course in why you’re excited about making movies.”

In neat contrast with her role as Melanie, Bridget Fonda also appeared in the HBO TV movie In the Gloaming, a tragic melodrama in which she starred with Glenn Close.

The film offers a sensitive treatment of the AIDs crisis. For her role, Bridget was nominated for the Primetime Emmy Award for Outstanding Supporting Actress in a Miniseries or Movie. It was a showcase of her range and her subtle power as an actress.

1998 saw the end of her long-term relationship with Eric Stoltz. But it also brought with it more silver screen success in the form of Sam Raimi’s excellent thriller A Simple Plan.

Though it underperformed at the box office, the movie was met with unanimous critical praise and was honored with two Academy Award nominations. One for the screenplay, and one for Billy Bob Thornton’s heartbreaking performance as Jacob.

Bridget’s next star vehicle was a somewhat unlikely one. A self-aware and fun-filled b-movie, Lake Placid, which was released in 1999. The movie sees Bridget Fonda doing battle with a monstrous crocodile.

She has spoken publicly about how she was encouraged to take part in the film out of nostalgia for her childhood, watching old monster movies with her father. Lake Placid is outrageously entertaining and spawned a minor horror franchise. It was also another box office hit, making over $56 million worldwide.

What followed for Bridget were a trio of unlikely film choices; a misguided western (South of Heaven, West of Hell), a metaphysical drama (Delivering Milo) and a frankly bizarre fantasy (Monkeybone).

None of these movies made money, but Monkeybone, in particular, was a notorious flop. It barely scraped back $5 million of its $75 million budget. Though Bridget Fonda brings a touch of class to each role, it is possible to discern a lack of commitment, and even a sense of disillusionment creeping in.

However, her next movie proved to be another summer blockbuster, and she herself was back on form. The movie in question was Kiss of the Dragon. A martial arts action movie starring Jet Li, who was at the time fresh from the unexpected success of Romeo Must Die.

Bridget plays against type somewhat as a prostitute who must join forces with the hero to rescue her kidnapped child. Though the movie got mixed reviews, with many criticizing its excessive violence, it proved a very profitable and popular summer movie.

Though nobody knew it at the time, Bridget’s next film would be her swan song on the big screen. The Big Shebang is a sweet romantic comedy in the vein of It Could Happen To You, and it co-starred Stanley Tucci.

Out of the Limelight

Though only 37, Bridget Fonda was happy for her career to end on a high. She hasn’t appeared on our screens since her lead role in the fantasy TV movie Snow Queen in 2002. That same year, she also received her final Golden Globe nomination for the Lifetime movie No Ordinary Baby.

The following year, Bridget’s name was in the headlines for a less auspicious reason when she was involved in a serious traffic accident. This left her with a fractured vertebra, but she successfully recovered, and that same year became engaged to composer Danny Elfman.

Elfman is perhaps most notable for writing the theme for hit animated sitcom The Simpsons, as well as for his various collaborations with director Tim Burton. The couple married in November of 2003, and have one child together.

Whether or not Bridget Fonda will ever make a return to the big screen, only time will tell. But either way, she has undeniably made her mark within Hollywood, and left behind an admirable body of work and a quietly mesmerizing screen presence.