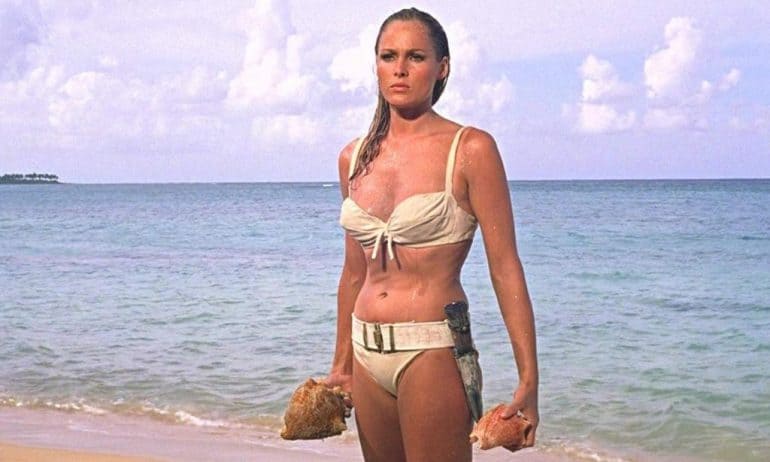 When we think of Ursula Andress, typically it is in a white bikini striding out of the ocean in Dr. No. That was the first James Bond film, released in 1962, and the screen appearance which transformed Ursula into a worldwide sex symbol.

But in reality, she has enjoyed a varied career that goes far beyond that single film.

Born to a German family living in Switzerland, she studied in Berne and Paris before relocating to Rome.

At this time, she worked a number of small-scale temporary jobs until she happened to encounter an Italian movie producer at a party one night. She attended a screen test and was duly offered a role.

This successful audition yielded bit-parts in the culturally-significant 1954 movie An American in Rome, as well as the comedy The Sins of Casanova. These two early appearances led to Ursula Andress being spotted by a Hollywood executive and offered a US contract.

Her initial signing with Paramount yielded a seven-year contract, but no cinema appearances due to Ursula’s poor command of English.

In 1955 she attracted some tabloid interest thanks to her romantic link with James Dean in the days prior to his death.

In an effort to regain her independence, Ursula bought her way out of her Paramount contract and started afresh with Columbia Pictures. However, this new contract did not provide any work either.

For a while, it seemed as though Ursula might abandon Hollywood altogether and return to her European roots. But in 1957 she married actor John Derek, which prompted her to stick around.

It was fortunate for Ursula Andress and for the movie-going public that she did because her perseverance would eventually lead to the role that would make her famous.

Dr. No was released in 1962 and propelled Ursula to fame. The image of her emerging from the sea was a star-making moment and has become so iconic that the bikini she wore was eventually auctioned off in 2001 for £41,125.

After being the first Bond girl, I had offer after offer and could take my pick of the roles that were around,” she continued. It’s a mystery. All I did was wear this bikini in Dr. No — not even a small one — and whoosh! Overnight, I made it. It gave me financial independence and changed my life completely.”

Ursula Andress was the quintessential “Bond girl” and the phenomenal success of the film gave her financial independence and the ability to choose her own roles. She also won a Golden Globe for New Star of the Year.

Her next major screen appearances came the following year, in two highly successful if lightweight comedies. The first was Fun in Acapulco, an Elvis Presley vehicle, and the second was 4 For Texas, in which she starred with Frank Sinatra and Dean Martin.

At that point, Ursula’s stock had never been higher. Everything she touched turned to gold. But in her personal life, she endured a split from John Derek, though the two would remain friends. In 1965, she embarked on a new relationship with French actor Jean-Paul Belmondo.

Belmondo is best remembered for his role in Jean-Luc Godard’s Breathless, a masterpiece of the French New Wave.

As for Ursula Andress, throughout the ’60s she took on a wide variety of roles across all manner of genres. She was a Hammer Film Productions horror film in which Ursula played an immortal goddess, while What’s New Pussycat? was notable as the first produced screenplay by Woody Allen.

And in 1967 she poked fun at her Bond girl status with an appearance in the parody Casino Royale, which featured an all-star cast and proved a box office hit, despite a troubled production.

For the next decade, Ursula took on roles that capitalized on her sex appeal. She made a grand total of seven appearances within the pages of Playboy Magazine and seemed to actively seek out acting roles with a salacious edge to them.

That included sex comedy The Sensuous Nurse, The Loves and Times of Scaramouche (the poster for which featured Ursula striding out of a river in a very similar pose to her iconic Dr. No sequence) and Tigers in Lipstick.

Ursula Andress continued to tackle all genres, and one of her most successful films of the decade was the European horror The Mountain of the Cannibal God, an exploitation horror film that tapped into the “cannibal boom” sparked by shockers like The Hills Have Eyes.

She also tackled European action movies like Loaded Guns, Africa Express and The Fifth Musketeer. She had effectively left Hollywood behind, and basked in the flourishing European cinema scene.

Ursula’s relationship with Jean-Paul Belmondo had ended in 1972, and in ’73 she began seeing Italian actor and stuntman Fabio Testi. Testi was best known then for his work on spaghetti westerns like The Good, The Bad and The Ugly. This relationship was ongoing until 1976.

Ursula’s most prolific decade as an actress ended on a high, with an appearance in the fitting role of the love goddess Aphrodite in British mythological epic Clash of the Titans, a big-budget adventure which saw her appearing alongside Laurence Olivier and Maggie Smith.

The movie was released in 1981 and proved a significant box office hit. During filming, Ursula Andress began a romantic relationship with the actor Harry Hamlin, who was playing the lead role of Perseus.

She became pregnant and gave birth to a son, Dimitri, at the age of forty-four. Though there was talk of engagement, unfortunately, the relationship was not built to last and the couple split in 1983.

In the 1980s, Ursula moved away from the big screen to focus more on her television appearances. These included guest spots on some of America’s most popular shows such as The Love Boat, Falcon Crest and the Emmy award-winning miniseries Peter the Great.

But by the 1990s, Ursula Andress had drifted away from acting and taken on only a handful of new roles throughout the whole decade. These were in a number of Italian fantasy miniseries and experimental films.

In a number of ways, this was a return to her roots in Italian cinema, where she had originally launched her career decades previously. Nowadays, she is unofficially retired.

Her last screen appearance of any kind was in 2005, and at the age of 84, she splits her time between Rome and Switzerland.

But to generations of movie fans, Ursula Andress will always be the epitome of style and sex appeal.