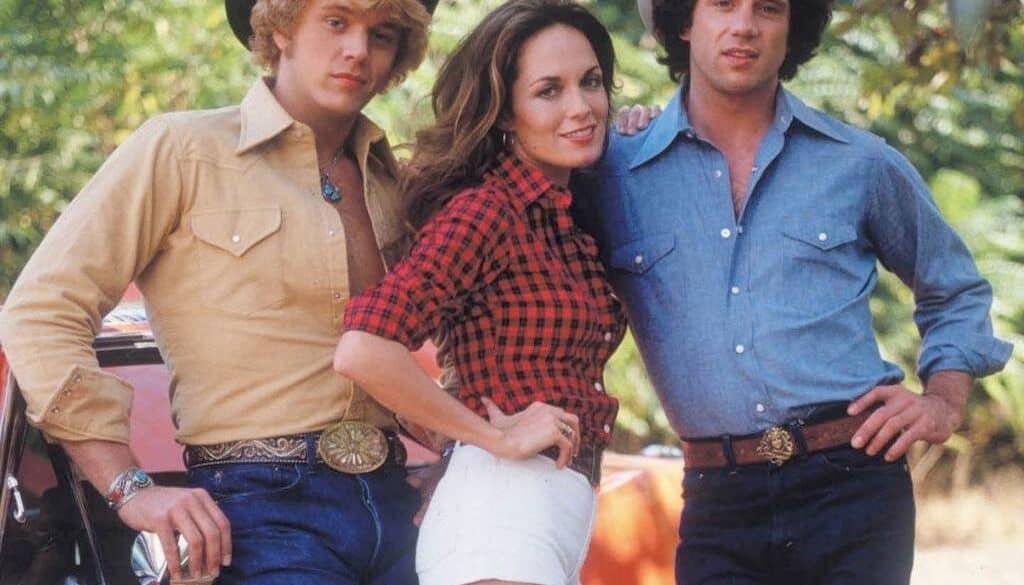 Catherine Bach may be best known as the hot pants-wearing Daisy Duke on The Dukes of Hazzard, but there’s much more to the Southern belle than meets the eye…

TV icon Catherine Bach was born Catherine Bachman in 1954. She is a descendant of the Verdugos, one of the earliest Californian families, and grew up in South Dakota.

She briefly studied drama at UCLA before branching out into her career as a professional actress. Her first screen appearance was in a great but now sadly forgotten murder-mystery movie starring Burt Lancaster, The Midnight Man.

It’s a great exercise in neo-noir in which Burt Lancaster stars as an ex-convict who becomes embroiled in the murder of a college co-ed. Catherine played the co-ed and made her mark, even in such a small role.

Next, Catherine Bach played a key supporting part in the blockbuster Clint Eastwood movie Thunderbolt and Lightfoot. It co-starred a young and Oscar-nominated for Best Supporting Actor, Jeff Bridges.

She followed that up in 1975 with a bit-part in the hit noir movie Hustle starring Burt Reynolds and Catherine Deneuve. The next year, Catherine married David Shaw, step-son of the famous actress Angela Lansbury.

In 1977, she would undertake an audition for a brand new TV show. A comedy-adventure series called The Dukes of Hazzard.

To begin with, it looked as though Catherine didn’t stand a chance. After all, the producers were looking for a voluptuous and blonde-haired Dolly Parton lookalike for the main role of Daisy Duke. But in spite of that, they saw something in Catherine Bach, and eventually, she was offered the role.

Unusually for a major TV show, Catherine was also given the opportunity to actively participate in developing the character of Daisy Duke. She asked if she could try out in her own clothes, and wound up sporting the cut-off jeans and high heels which would come to define the character.

“I had go-go boots, a white turtleneck and a blonde wig because the creator loved Dolly Parton. I thought, “We need a costume change.” So I got my jean shorts that I could never get even, with cowboy boots and a little top… They loved it.”

The series proved a hit, attracting almost 22 million viewers at its height, coming second only to Dallas. Likewise, the twin images of Catherine Bach in her Daisy Duke get-up and the famous Dodge Charger the “General Lee” became iconic.

Daisy Duke is a rogue Southern Belle and a cousin of the main series protagonists, Bo and Luke Duke. She frequently becomes embroiled in their picaresque misadventures and is also a major sex symbol.

The character’s trademark look was so recognizable even at the time that her style of denim shorts became colloquially known as “Daisy Dukes,” and are often referred to as such even today.

Likewise, Catherine’s legs were insured for one million dollars at the height of the show’s popularity. A publicity stunt that helped to engrain the image of Daisy Duke in the public consciousness.

This was further emphasized when she modeled for the figurehead of San Diego schooner Californian in 1985. In July of 2003, the Californian was designated the official state tall ship of California by Governor Arnold Schwarzenegger.

Catherine Bach posed as Daisy Duke for a poster photoshoot. The finished product proved to be a phenomenal success, shifting five million units and attracting an unlikely admirer in the form of First Lady Nancy Reagan.

Catherine also played Daisy Duke in a number of spin-offs from The Dukes of Hazzard franchise including the short-lived Enos in 1981 and the Saturday morning cartoon The Dukes. But sadly, ’81 was also the year that Catherine’s marriage to David Shaw ended in divorce.

The Dukes of Hazzard ran for a total of seven seasons, finally drawing to a close in 1985. Contract disputes with the two lead actors Tom Wopat and John Schneider led to the characters of Bo and Luke briefly leaving the series.

This drastically harmed its ratings. Even when they returned for seasons six and seven, the writing was on the wall.

Life After The Dukes of Hazzard

Immediately after the end of The Dukes of Hazzard, Catherine Bach took a step back from acting and made only a few appearances in minor films during the next few years.

These included the 1987 action movie Street Justice. Though this proved to be a forgettable and lackluster effort, it was Catherine’s first leading role on the big screen, capitalizing on her popularity as Daisy Duke.

Next came the thriller’s Criminal Act and Driving Force, strictly b-movies but ones that benefited from Catherine’s prestigious presence.

In 1990, Catherine Bach married for the second time. This time, to showbiz lawyer Peter Lopez who was famed for representing Michael Jackson and opera star Andrea Bocelli. The couple had two daughters together: Sophia and Laura.

Subsequently, in 1992, Catherine took on a major role in the two-season run of a brand new Canadian series, African Skies.

African Skies was a family drama series set in post-Apartheid South Africa that followed the trials and tribulations of two families, one black and one white. Catherine was one of the leads in a cast which also included movie legend, Robert Mitchum.

It enabled Catherine Bach to reprise the role of Daisy Duke in a brand new storyline which saw the character about to embark on her second marriage.

The success of this movie was repeated in 2000 with the sequel The Dukes of Hazzard: Hazzard in Hollywood. It featured Daisy Duke taking on work as a Hollywood stuntwoman.

In 2010, Catherine’s husband Peter tragically committed suicide by a gunshot wound. In 2012, after two low-key years outside of the public eye, Catherine Bach took on a new challenge. A long-term recurring role in the long-running soap opera The Young and the Restless.

Her character of Anita Lawson is a schemer and manipulator who injected considerable drama into the series and invigorated several major storylines.

Catherine remains a stalwart of the show and continues to thrill a new generation of fans who were not even born when she first appeared on our screens.

Time has been kind to Catherine Bach. She has lost none of her charm or screen charisma and shows no signs of slowing down at age 66.