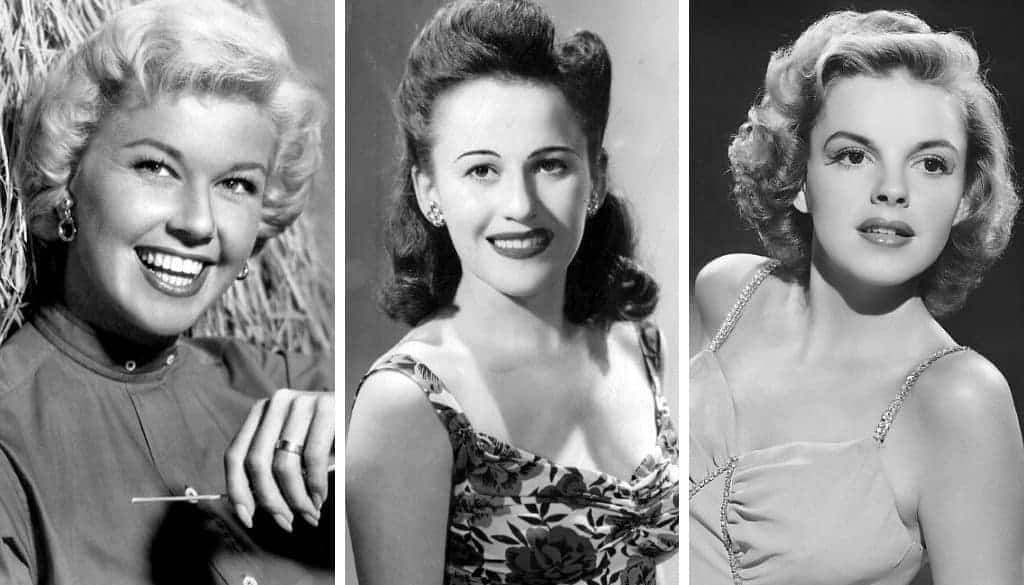 Female Singers of the ’50s: Top 20 Greatest Artists We Love

Our list of the 20 best female singers of the ’50s looks back at a time when female vocalists really began to take center stage and move up the charts. Although gender equality issues still existed, there were plenty of women who became influential in popular music.

They came from all different genres, country, folk, and popular music. While some of these women became household names, others seemed to fade away as quickly as they appeared. One thing is for sure, these women paved the way for female performers to come.

In no particular order…

Peggy Lee was one of the most multi-dimensional performers of the 1950s. She started out as a background singer on Benny Goodman’s radio show but would go on to become a solo performer, writing and recording her own material.

She also starred in movies and created both songs and poetry to be performed by other artists. Two of her biggest hits included, “Bye, Bye, Blackbird” and “Fever.” Of course, these songs have been covered by many artists since, but none can quite reach the success that Peggy Lee enjoyed with the original versions.

From an Italian neighborhood in Newark, New Jersey, Connie Francis was born Concetta Franconero in December of 1938. She has been a recording artist for most of her life. One of her biggest hits was “Where the Boys Are” in 1961.

This song was the theme song from a movie by the same name, starring Connie Francis. The movie was a big hit, showcasing the crazy days and nights of Spring Break in Southern Florida. The movie was controversial but achieved critical acclaim.

While she would go on to star in a handful of films, she never felt comfortable in front of the camera. While she would never act again, she did continue to perform and is still performing on stage today.

While she is most famous for her starring role as Dorothy in The Wizard of Oz, Judy Garland was a very popular female singer of the ’50s. Born Frances Ethel Gumm in 1922, she changed her name to Judy Garland as a young girl.

Some of her most famous songs were, of course, “Somewhere Over the Rainbow” and “I’m Just Wild About Harry.” She died early, at just 47 years old after a tumultuous personal life and career. Many say she was lost way too early and that she had a lot more to give to the world.

Her daughter, Liza Minnelli, enjoyed her own long and successful career as a musical performer, both on and off the stage.

Most people recognize Rosemary Clooney for her leading role in the film White Christmas, opposite Bing Crosby. In the movie, she sang not only her own songs but also some of her co-star, Vera Lynn’s.

Some of her biggest moments in the film were singing songs such as, “White Christmas” and “Sisters.” She also enjoyed success in popular music with hits such as “Mambo Italiano” and “Hey There.”

Doris Day was more famous for her movie roles, starring opposite the likes of Rock Hudson in Pillow Talk. But she was also an accomplished singer, with songs such as “Day after Day” and “Till the End of Time.”

She was still performing up until her death in 2019. Very few female singers of the ’50s managed to match the sort of success enjoyed by Doris Day.

She spent a lot of time traveling with the United Service Organizations, performing for the troops in WWII. Some of her biggest hits included, “I’ll Walk Alone” and “Blues in the Night.”

Born Clara Ann Fowler in 1927, Patti Page found most of her success in music, unlike some of her contemporaries who adorned the stage as well.

She was a success in both pop and country music, selling more than 100 million records over her six-decade-long career. Two of her biggest hits included “How Much is That Doggie in the Window” and her signature song, “Tennessee Waltz.”

Dinah Washington was the most popular black female singer of the ’50s. The self-proclaimed “Queen of the Blues,” Washington performed mostly jazz songs. She was inducted into the Rock and Roll Hall of Fame in 1993. Her biggest hit, “What a Diff’rence a Day Made,” reached No. 4 on the US pop charts in 1959.

Julie London was born to parents who performed in vaudeville, so it’s no surprise that she performed mostly jazz songs. She recorded a total of 32 albums in both the pop and jazz genres.

With a career spanning over 40 years, she was one of the most prolific female singers of the ’50s. Her signature song, “Cry Me a River,” has been covered by many artists over the years, including Joe Cocker.

Georgia Gibbs was born Frieda Lipschitz in 1918. She started out performing rhythm and blues songs from the south. She found her home on TV and variety shows, eventually going on tour with Danny Kaye and Sid Caesar.

Her first solo hit was “If I Knew You Were Comin’ I’d’ve Baked a Cake” released in 1950, but she is most well-known for her song “I’ll Be Seeing You.”

While most people are more familiar with her sister, Rosemary, Betty Clooney did enjoy a brief career in music during the 1950s. She started out as a singer and television presenter.

During her brief period of popularity, she recorded two of her bigger hits, “Kiki” and “You’re All I See.” Many people are surprised to learn that Betty Clooney is the aunt of Hollywood star, George Clooney.

Born as Catherine Laverne Starks, Kay Starr was an American pop and jazz singer. She was one of the first female singers of the ’50s who was of American Indian heritage. One of her greatest hits was “Wheel of Fortune.”

She also performed “Crazy,” a song made more popular by the late Patsy Cline. One of her biggest mistakes may have been turning down the chance to record “Walkin’ After Midnight,” one of the biggest hits of the 1950s and performed by Patsy Cline.

While not one of the best-known female singers of the ’50s, Jaye P. Morgan did have a period of success. Her husky voice lent itself nicely to her solo career. She would go on to host her own variety show, The Jaye P. Morgan Show in 1956.

As you probably guessed, her name was a play on the name of American banker J.P. Morgan. She earned the nickname in high-school when she was class treasurer. It would only be a year after high-school that she would record her first hit song, “Life is Just a Bowl of Cherries,” which reached No. 26 on the Billboard charts in 1950.

Considered one of the most influential singers in the 20th century, Patsy Cline enjoyed just eight years as a signer before she died in a tragic plane crash in March of 1963. In that short time, she managed to record some of the biggest hits of the 1950s and ’60s.

Some of her songs, such as “Crazy” and “I Fall to Pieces” became massive hits of the century. She also recorded the mega-hit, “Walkin’ After Midnight,” a song that fellow country artist, Kay Starr, turned down. She was also the first solo female performer ever to be inducted in the Rock and Roll Hall of Fame.

While she became popular later on for her movies and television show, The Debbie Reynolds Show, Debbie Reynolds did enjoy a successful music career in the 1950s. Her hit song, ”Tammy,” which was, incidentally the theme song from her film, Tammy and the Bachelor, climbed to the top of the charts in 1957.

She enjoyed a career spanning more than 70 years in acting, singing, and business. She passed away on December 28, 2016, just one day after her daughter, Carrie Fisher, died.

Born Marjorie Helen Orwig, Margie Rayburn enjoyed a brief but successful career in music during the 1950s. She originally sang with her band, “The Sunnysiders,” who had a big hit called “Hey, Mr. Banjo.”

Rayburn would go on to have a solo career, with her song, “I’m Available,” reaching No. 9 on the Billboard Charts in 1957. She tried desperately for a few years to find another hit, but when she wasn’t able to do so, she decided to retire from the music industry in the mid-1960s.

Mindy Carson grew up in the Bronx and was working for a local candy company when she auditioned for a radio show called “Stairway to the Stars.” She did so well they let her perform on the show for more than 8 months in 1946.

While there, she recorded a song called “Rumors are Flying” with the show’s bandleader, Harry Cool. She then went on to begin her own career as a prominent female singer of the ’50s, recording hits such as, “Candy and Cake” and “My Foolish Heart.” She hosted her own variety show for a bit and then, like so many others, vanished from the music scene. She is retired and still alive today.

Toni Arden wasn’t a huge musical star in the 1950s, but she did host her own variety show and appear on over a dozen musical shows for the U.S. Marine Corps. She grew up with a father who sang with the Metropolitan Opera.

Her brother, Jan Arden, was also a signer. The two sang together in New York nightclubs in the 1940s. By the 1950s, she recorded a couple of popular songs, including, “Too Young” and “Kiss of Fire.” The songs reached No. 15 and No. 14 on the charts respectively. Her song, “Padre,” sold over a million records in the late ’50s.

At over 102 years old, Vera Lynn, born Vera Margaret Welch, is the oldest woman on our list of the greatest female singers of the ’50s. She was actually born in England but became very popular in both the UK and the US. During World War II, she was coined the “Forces’ Sweetheart.”

She was popular for her many performances for the troops all over the world. She continued her success as a solo singer throughout the ’50s and ’60s, with her most popular hit, “We’ll Meet Again.”

Kathy Linden, who originally hails from and still lives near Burlington County, New Jersey, was a professionally trained singer. She started out as a tap and ballet dancer at the age of 5 but went on to attend the Philadelphia Conservatory of Music after high school.

She had two major charting hits. “Billy,” her first hit, reached No. 7 on the Billboard charts in 1958. Her second hit came one year later with, “Goodbye Jimmy, Goodbye.” She retired from music in 1963 but started a career in Christian music more than 20 years later.

She still tours with church groups today and has recently released Christian music albums. Interestingly, her actual birthdate is not known, all we know is that she was indeed born in 1938.

We hope you’ve enjoyed our list of the top 20 female singers of the ’50s.