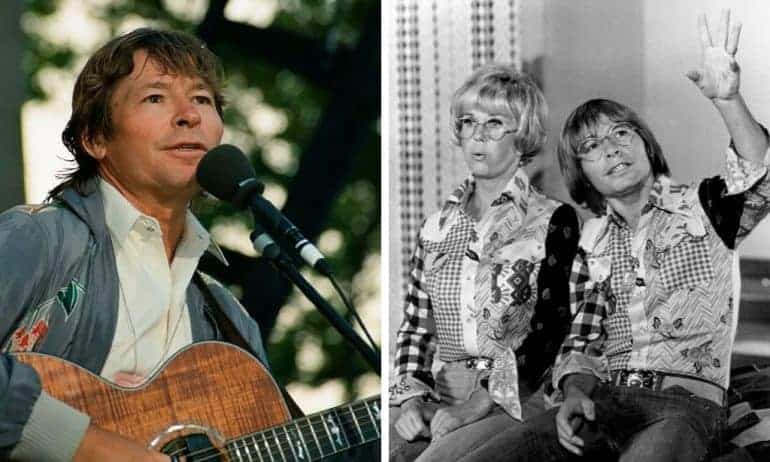 Our top 10 best John Denver songs list explores the music of one of America’s greatest folk singer-songwriters. His charming character, humanitarian work, and good-natured music has earned him the title as one of the most “beloved entertainers of his era.”

One of John Denver’s songs that was almost abandoned, “Calypso” appeared on his 1975 album, Windsong. The song is about the ship Calypso. Jacques-Yves Cousteau bought this ship and turned it into an oceanographic vessel, using it to research the effects of climate change and pollution on the ocean.

Whilst aboard the ship, John Denver began writing the chorus for the song. As an artist that cared deeply about the environment, the song was a compliment to the ship and its captain’s important research.

The opening track to his fifth studio album Aerie, “Starwood in Aspen” is about his home in Colorado. Denver grew up in a military family and moved around a lot from a young age. Because of this, he always struggled to find a place to call home. However, he eventually found that feeling in Colorado, and after meeting the love of his life, the pair moved to Starwood in Aspen, inspiring this sentimental song.

One of the famous John Denver songs to feature a female vocalist, Olivia Newton-John’s harmonies on “Fly Away” create a pleasantly nostalgic track. The song, about loneliness and craving a simpler way of life, rose up the charts quickly, peaking at No. 13 on the Billboard Hot 100 chart.

7. Sunshine On My Shoulders

“Sunshine On My Shoulders” was the first John Denver song to reach the No. 1 spot on the Billboard Hot 100 chart. The song was written while Denver was in Minnesota, it was late winter and he was excited about the thought of spending more time in the outdoors. He recalls, “On one level it was about the virtues of love. On another, more deeply felt level, it reached for something the whole world could embrace.”

Not actually written by John Denver, “Thank God I’m a Country Boy” was written by Denver’s guitarist and fiddle player, John Martin Sommers. Originally featured on his 1974 album, Back Home Again, the song was outshined by the album’s hit “Annie’s Song.”

It wasn’t until a live version of the song was recorded at the Universal Amphitheatre in Los Angeles and released as a single that the song reached No. 1 spot on the Billboard Hot Country Singles and Billboard Hot 100 charts.

Another one of the John Denver songs about his love for the state of Colorado, “Rocky Mountain High” took around nine months to complete. In his autobiography, he remembers the moment whilst camping which initiated the writing of the song.

“I remember, almost to the moment, when that song started to take shape in my head. In mid-August, Annie and I and some friends went up to Williams Lake to watch the first Perseid meteor showers. Imagine a moonless night in the Rockies in the dead of summer and you have it. I had insisted to everybody that it was going to be a glorious display. Spectacular, in fact.”

Denver wrote this song for his first wife Annie Martell Denver after returning from their first period separated from each other. It became one of his biggest selling hits, also becoming his only hit single to top the charts in the United Kingdom. Annie remembers the day it was written.

“It was written after John and I had gone through a pretty intense time together and things were pretty good for us. He left to go skiing and he got on the Ajax chair on Aspen mountain and the song just came to him. He skied down and came home and wrote it down… Initially, it was a love song and it was given to me through him, and yet for him, it became a bit like a prayer.”

3. Leaving on a Jet Plane

Originally titled “Babe, I Hate to Go,” “Leaving on a Jet Plane” was written by John Denver in 1966. He later recorded a version of the track for Rhymes & Reasons, his debut solo album. The song was famously covered by American folk group Peter, Paul and Mary. The group’s version was much more successful than Denver’s, reaching No. 1 on the Billboard Hot 100.

Released as a single from his 1974 album of the same name, this lyrical gem earned him the “Song of the Year” award from the Country Music Association in the fall of 1975.

Initially written by Bill Danoff and Taffy Nivert, Denver helped them finish the song after performing at a gig with the Danoffs in Washington DC. After the show, the trio went back to the couple’s house and played Denver the track.

The next evening, they were singing it together on stage. After realizing he had a hit song, he brought the Danoffs to New York and recorded it. The Danoffs had initially wanted Johnny Cash to record it.