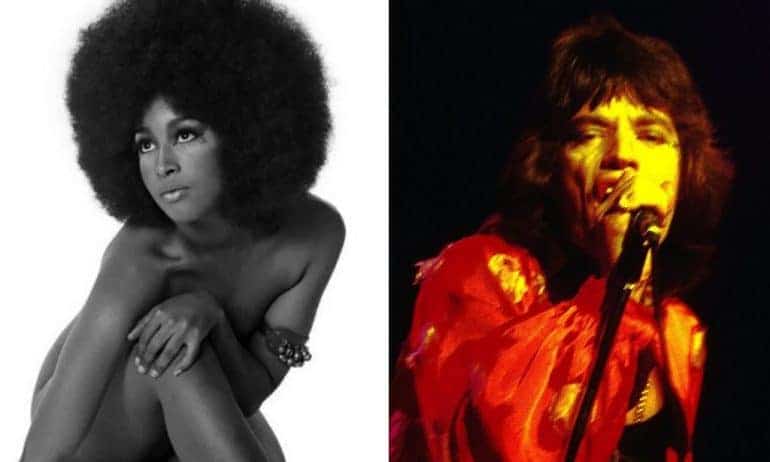 Marsha Hunt has done it all… The poster girl of the “Black is Beautiful” movement, love affairs with Mick Jagger and Marc Bolan, performing at Isle of Wight festival in ’69, the list goes on…

Marsha Hunt is a legendary American actress, singer, former model and novelist. She has spent most of her life in Ireland and Britain. She rose to fame after performing as “Dionne” in the ground-breaking West End rock musical Hair.

Although only having a few lines of dialogue, she became the star and poster girl of the rock musical, her giant afro garnering all the media attention.

Apart from helping to introduce revolutionary hippie culture into mainstream London fashion, she has written three well-known autobiographies and three novels. She’s had love affairs with Marc Bolan and Mick Jagger, with whom she had a daughter with, Karis Jagger.

Marsha Hunt was born in Philadelphia on April 15, 1946, and lived in North Philadelphia. Her father, Blair Theodore Hunt, Jr., was one of the first black psychiatrists in America. He did not live with Marsha and it was reported that when Marsha Hunt was 15-years old, she was informed that he had committed suicide three years prior.

Her mother, Inez, was a librarian in a local library. Hunt lived with her mother, aunt, and her grandmother. Three very different and strong women, all of which encouraged her to excel, especially in her academics.

In 1960, she moved to Kensington, California along with her family where she attended Oakland High School. She began preparing to attend the University of California, Berkeley, the hub of counterculture.

In 1964, Marsha Hunt found herself protesting against the Vietnam War alongside Jerry Rubin. In her book Undefeated, she recalls her experiences in Berkeley at the time, “sitting in for the Free Speech Movement, smoking pot, experimenting with acid, lining up to take Oriental philosophy courses, daring to cohabit, and going to dances in San Francisco.”

By February of 1966, with the belief that “anything was possible,” she moved across the pond to the United Kingdom, spending a brief period in the Scottish capital, Edinburgh.

Marsha Hunt met Mike Ratledge of Soft Machine in late 1966. She ended up marrying him on April 15, 1967, most likely to get a visa to remain in England. Although remaining good friends throughout, the band headed to France two months after their marriage without her.

After arriving in London, Hunt began working as a singer. Although she claims she wasn’t very good, in February 1967, she took a singing job in Alexis Korner’s trio Free at Last to support her journey back home. After deciding to stay in the UK, she joined the British soul and rock band, The Ferris Wheel, in 1968.

The same year, Marsha Hunt rose to fame after appearing as “Dionne” in the rock musical Hair, smashing the box-office. Although she had only two lines, she still managed to catch the attention of the media. Her photograph, taken by Justin de Villeneuve, was used on the poster and playbill for the production and began popping up in newspapers and magazines across the country.

One of the three Americans to be featured in the London show, she began her West End career with no contract. After a few nights of doing her thing, she was swiftly offered a contract.

In August 1969, she played at the Jazz Bilzen Festival and Isle of Wight festivals with her backup band “White Trash.” Her first single was a cover of Dr John’s song “Walk on Gilded Splinters,” with future Yes-man Rick Wakeman on keys. Produced by Tony Visconti and released on Track Records in 1969, it ended up becoming a minor hit.

The Marc Bolan connection came about through Hunt’s producer, Tony Visconti, another displaced American creating a life for himself in the London scene. Visconti was working on Tyrannosaurus Rex’s new album “Unicorn” at Trident Studios in Soho.

He remembers the pair meeting, “you could see the shafts of light pouring out of their eyes into each other… We finished the session unusually early and Marc and Marsha walked out into the night hand in hand.”

Hunt and Bolan got on very well. Along with earning composer royalties from her album, Bolan added backing vocals to a cover of The Supremes “My World Is Empty Without You.”

The album also features The Who’s Pete Townshend on her version of “Long Black Veil.” It’s also The Who-man’s guitar that runs through a jagged version of “Wild Thing,” which was recorded in the company of Ronnie Wood, Kenney Jones and Ian McLagan of The Faces.

In May, 1977, an album named “Marsha” featuring various disco songs was released in Germany. It was recorded at Musicland Studios in Munich and was produced by Pete Belotte, who helped to produce many of Donna Summer’s albums.

Marsha Hunt first met Mick Jagger when she was asked by the Rolling Stones to feature in a photoshoot for their track “Honky Tonk Woman.” She refused the offer due to her status as a role model for black women as well as not wanting to feature as an object of sex. She said herself, “I didn’t want to look like I’d just been had by all the Rolling Stones.”

Her fame and confidence in speaking out against black racism attracted the Rolling Stones frontman even more. In her 1986 memoir Real Life, she recalls him turning up to her Bloomsbury apartment at midnight. “Framed by the doorway as he stood grinning with a dark coat… He drew one hand out of his pocket and pointed it at me like a pistol… Bang.”

The pair soon began their passionate but merely nine-month-long relationship. In an interview with journalist Frankie McGowan, Marsha Hunt said that Jagger’s awkward and shy nature made her fall in love with him. However, their relationship was mostly kept in private due to differences in their social life.

In 1970, Hunt gave birth to her one and only daughter and Jagger’s first child, Karis Jagger. In an interview, Hunt admitted that even though the baby was planned, she and Jagger did not intend to stay together. Jagger contemplated proposing to her but didn’t think he loved her enough to spend his entire life with her. Hunt similarly thought the same about Jagger.

After the birth of Karis Jagger, Marsha Hunt was financially unstable and had no jobs or offers to perform. When Karis turned two years old, Marsha filed a complaint against Jagger in the London court.

Mick Jagger didn’t want to claim the paternity of his firstborn daughter with his former lover. For nearly a decade, Hunt fought a bitter and bloodthirsty battle with Jagger to force him to accept the child was his.

Jagger finally agreed to build a trust fund for his daughter and would pay $17 per week till she became 21. In 1978, Hunt filed another complaint on paternity suit in Los Angeles to pay $580 a week along with the claim of admitting their daughter in public. During that time, Marsha Hunt was unemployed and received welfare payments from Aid to Dependent Children.

In 1979, Hunt finally won the paternity suit, admitting that all she wanted to say to her daughter was that she didn’t let her father go away without fulfilling his responsibilities. During the years afterwards, Jagger became close to his daughter Karis and often took her with him on holidays along with the rest of his family.

In her 1986 memoir Real Life, Hunt recognizes that the song Mick Jagger wrote, “Brown Sugar,” was indeed about her. Although there is also speculation that it is about the soul singer Claudia Lennear.

In the 1990s, Marsha Hunt began writing. Her first novel Joy was about a woman who grew up to join a singing group before dying an early death. The novel touches on a period of struggle in a black neighborhood during the 1950s and 1960s, where the characters were striving to fulfill their dreams and succeed in life. Hunt said that, in her novel, all the characters are victims, yet guilty.

She expressed her view of black stereotypes during that period in Joy. For example, mentioning how girls with fair skin and long hair were preferred to girls with kinky curly hair and other stereotypical black characteristics.

Hunt published her second book Free in 1992. The novel details the story of freed slaves and their children living in Germantown, Pennsylvania in 1913. She wrote Like Venus Fading in 1998, which is inspired by the lives of Adelaide Hall, also known as the “lightly-tanned Venus.”

Throughout her life, Marsha Hunt stood against black racism in society. From the 1960s, when forging a career for herself by modeling and acting in London, she took a strong stance against the black stereotypical mentality.

She took the limelight spot, with her stage presence as “Dionne.” Creating a fashion revolution with her afro hairstyle. In an interview, she said that she was relieved when she came to England and people called her American, instead of black or African American.

As an icon of the “Black is Beautiful” movement, Marsha Hunt has lived her life on her own terms. Often using any opportunity she’s earned to voice her political opinions, for the better of society.