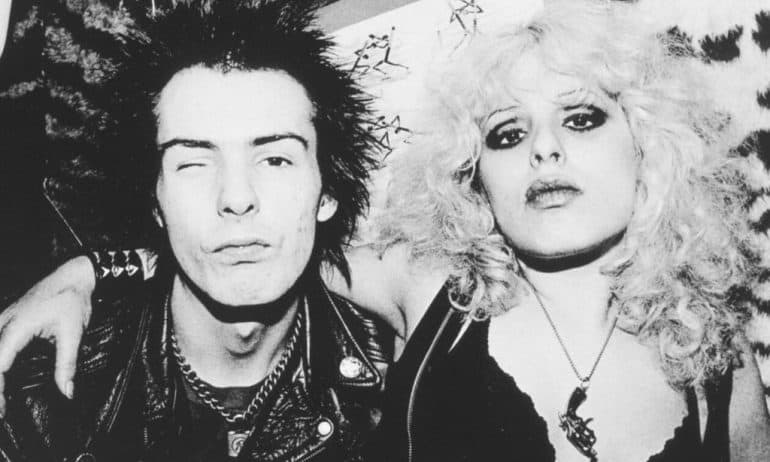 On October 12th, 1978, the body of Nancy Spungen lay lifeless on a bathroom floor in the Chelsea Savoy Hotel, many recalling it as the day punk died…

Who Was Nancy Spungen?

At a young age, Nancy showed destructive signs perhaps setting the scene for her future life. Her violent behavioral outbreaks included regularly threatening her younger sister Susan and younger brother David. On one occasion, apparently even threatening to kill a babysitter with a pair of scissors.

After being expelled from public school aged 11, her parents sent her to a therapeutic boarding school where she ran away and attempted to commit suicide. By 15, she was diagnosed with schizophrenia.

After a tumultuous stint at university including multiple arrests, she left home aged 17 and moved to New York City, working as a stripper and prostitute. She quickly became accepted into the NYC music scene comprised of outcasts, misfits, and social rejects.

She set the tone as a new type of groupie, embracing the most shameless aspects of it. Soon after her arrival, she was following bands such as Aerosmith, the New York Dolls, Ramones, Debbie Harry, and the Heartbreakers.

Nancy Spungen speaking in an excerpt of Legs McNeil’s Please Kill Me: The Uncensored Oral History of Punk:

“I was concentrating on big rock n roll stars… I toured around with Aerosmith for a while. One of the first nights I was with them…we drove out in the limousine. I was sitting in the backseat with Tom Hamilton on one side of me and Brad Whitfield on the other. I had one hand on one prick and one hand on the other…I had a good time and I got treated nice… I know everybody… a lot of my really good friends are in the top bands.”

Even Iggy Pop sensed her disturbing nature, “I spent the night with her once. She wasn’t a beauty, but I liked her. There was something really spunky there, but I was a big boy by then. So my thought was, trouble.”

In 1977, apparently pursuing a crush on Jerry Nolan, she followed the Heartbreakers over to London. However, even her usual suspects began to tire of her carnage. 1970’s muse, Bebe Buell, recalls Jerry Nolan trying to get rid of her, “I remember Jerry saying to me, ‘If this chick Nancy Spungen tries to find me, please don’t tell her where I’m staying.’ He was trying to dodge the bullet.”

It wasn’t long though until Nancy found her partner in crime. After discovering Britain’s biggest punk band, the Sex Pistols, she began following them around and at first trying it on with Johnny Rotten with little success.

Whilst the rest of the group banned her from joining them on tour, Sid Vicious found Spungen’s biting personality attractive.

Photographer Bob Gruen joined the Sex Pistols on their U.S. tour, “I remember talking to Sid on the bus, and he really seemed to care for her,” Gruen said. “He didn’t have any anger or hatred toward her. Sid very much loved Nancy. They seemed to communicate and connect.”

The relationship wasn’t without turmoil however, even prior to meeting Nancy Spungen, Sid Vicious was mayhem and frustrating the band through his drug abuse. But the two together were even more trouble.

Their relationship was riddled with domestic violence and heavy drug abuse, with the press, eventually calling Spungen, “Nauseating Nancy,” due to her abrasive behavior.

After the Sex Pistols’ last performance in January of 1978 at Winterland in San Francisco, the band broke up, pointing out Sid’s addiction and relationship with Spungen as the underlying cause.

On August 24th, 1978, Nancy Spungen and Sid Vicious moved into the Chelsea Savoy Hotel in New York. The hotel had numerous famous residents over the years including Janis Joplin, Jimi Hendrix, Bob Dylan, and Iggy Pop.

The hotel proved to be a breeding ground for their underlying troubles, with drug binges lasting weeks on end and countless bouts of domestic violence. It wasn’t long before friends of the couple began fearing the worst.

Guitarist from the New York City band Television, Richard Lloyd, recalls, “Sid and Nancy as a couple was going down the toilet, and everybody could see it. To hang out with Nancy and Sid was to make a grievous mistake for your own health. I took lethal doses of everything known. You couldn’t call the kettle black. Mine was jaw-droppingly black. But I’m still here. They’re not.”

How Did Nancy Spungen Die?

On October 12th, 1978, Nancy Spungen’s body was discovered half-naked beneath the sink on the bathroom floor of their hotel room. She suffered from a single stab wound to her abdomen, causing the 20-year-old to bleed to death.

Vicious allegedly owned the knife that made the fatal stab wound and was immediately arrested after being found roaming the halls of the hotel out of his mind. He was consequently charged with second-degree murder.

According to the Independent, “He initially confessed to the crime, he later denied it, claiming he had been asleep when she died.” In February of 1979, whilst out on bail, Sid Vicious was found dead from an opium overdose in a Greenwich Village apartment. His death signaled the end of Nancy Spungen’s murder case which to this day remains unsolved.

Nancy Spungen’s death has divided music historians and fans of the Sex Pistols since, with various different theories cropping up. Most suggesting Sid Vicious was not responsible.

One such theory suggests that it was 1970’s actor, drug addict and dealer, Rockets Redglare, who delivered the opiates that night after receiving a call from Spungen at 1.30 am, that killed her.

A police report indicates that Vicious was unconscious from 3 am and 9 am after taking a large number of drugs, during this time in which an autopsy concludes Spungen’s time of death. The only other person seen in the hotel during this time was Redglare.

Redglare has consistently denied involvement in the murder. He suggests that the other dealer who visited that night, “Michael,” who had left to pick up more opium and was set to return, was responsible. Redglare believes upon Michael’s return and once noticing Vicious unconscious, he tried to rob Spungen of the remaining drugs and money, ending in a fatal confrontation.

There is even a theory that Nancy Spungen and Sid Vicious had a death pact. But because Sid had indulged in too many drugs, he was not able to help Spungen after she had stabbed herself, ending in a botched double suicide.

Nancy Spungen’s death will forever remain a foggy mystery and likely never be resolved. Despite everyone having their own theories, one thing most agree is on is that Spungen’s death and Sid’s overdose four months later symbolized the end of an era in punk.

Actor, a screenwriter, and member of the seventies band Dead Squirrels, Victor Colicchio, sums it up nicely.

“The music was catching on, bands like Talking Heads were breaking out. A lot of us were thinking, Hey, we may not have to get regular jobs. A lot of it hinged on Sid. He seemed to be the last one carrying the torch. When he died, we all felt like it was over. A couple of bands didn’t even want to gig. What was shunned was now persecuted. It was almost as if the war was over and we’d lost.”