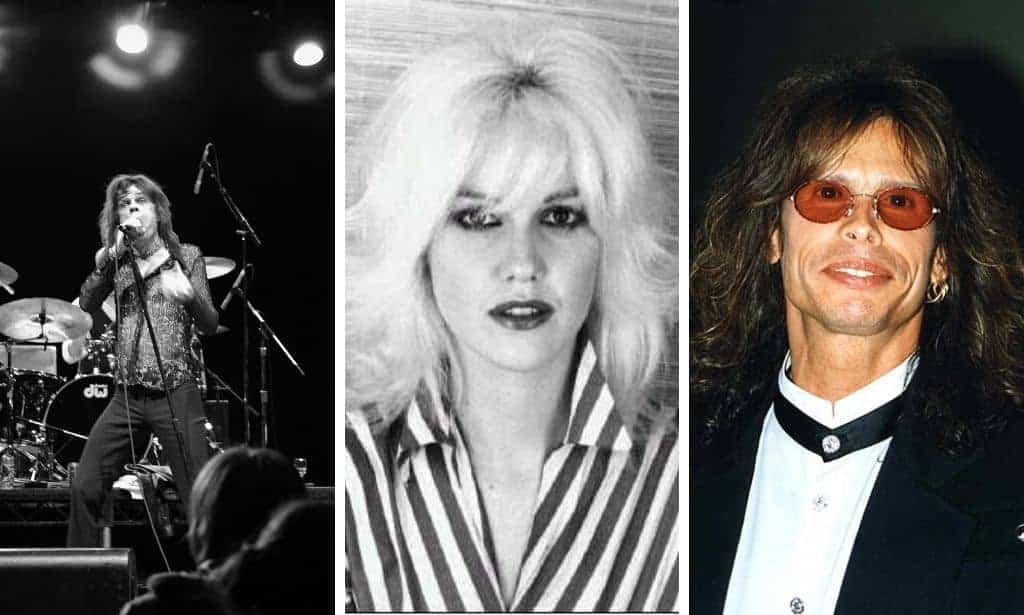 Cyrinda Foxe, a groupie, muse, Marilyn Monroe look-alike, the real “Jean Genie,” actress, and more. If you were a regular at Max’s Kansas City in NYC during the ’70s, then there’s no doubt you would have crossed paths with Cyrinda Foxe. We’re diving deep into her life in the fast lane.

Cyrinda Foxe was born as Kathleen Victoria Hetzekian on February 22, 1952, in sunny Santa Monica, California. She was raised an ‘army brat’ (her father retired military) in an abusive household, her parents divorced when she was young.

Before graduating high school, she moved to Oklahoma and then Texas. Growing up in the Midwest during the 1960s, she became a massive fan of the Rolling Stones and the Kinks.

At the age of 19, she moved to New York in pursuit of becoming an actress. It was in NYC when she changed her name to Cyrinda Foxe and dyed her hair bleach blonde.

In an interview with Punk Magazine, Cyrinda Foxe remembers arriving in NYC. “I thought it was fabulous. It was everything I thought it would ever be. I’ve been reading magazines since I was a teenager and New York was the place that had The Cheetah and all those clubs where everybody went. And all the girls were so great and the clothes were so fabulous. Why would I not wanna go there?”

Upon arriving in NYC, Cyrinda Foxe immersed herself heavily into the NYC nightlife scene of the 1970s. She was a regular face at the then renowned nightclub, Max’s Kansas City. The club became a focal and meeting point for poets, artists, musicians, and even politicians.

It was Andy Warhol and his entourages’ favorite local haunt. Along with members of the glam rock scene such as David Bowie, Lou Reed, Iggy Pop, and many more.

In 1972, Cyrinda Foxe met David Bowie and they began a short but fast-paced relationship. She even joined him during parts of his first US Ziggy Stardust tour. Famous rock ‘n’ roll photographer Mick Rock remembers Cyrinda Foxe having a large influence on David during this time. Apparently, Bowie would wear some of her clothes, copy her makeup, and even imitate some of her gestures on stage.

Whilst in San Francisco for the Californian leg of the tour, Mick Rock filmed the promo video for David Bowie’s single “The Jean Genie.”

Along with concert footage from San Francisco’s Winterland, it features clips of David and his then-girlfriend Cyrinda Foxe outside the Mars Hotel, a local hangout spot of famous beat poet Jack Kerouac.

Mick Rock recalls, “Wanting it to locate Ziggy as a kind of Hollywood street-rat, it became important to me that he had a consort of the Marilyn brand. So I telephoned Cyrinda Foxe in New York and asked her if she was into playing the role. She was, quite rightly, as no-one could have done it better, and she flew in immediately.”

Cyrinda Foxe recounts the experience of being in the video with David, “Yeah, it was fun. ‘Cause he’s fun. He’s wonderful. What could be said? I mean, look at him, he’s so handsome. Look at him now, he’s more handsome now than he ever was.”

It’s understood by many that Cyrinda Foxe was the inspiration behind the track, “The Jean Genie.” In his 2005 book Moonage Daydream Bowie states.

“Starting out as a lightweight riff thing I had written one evening in NY for Cyrinda’s enjoyment, I developed the lyric to the otherwise wordless pumper and it ultimately turned into a bit of a smorgasbord of imagined Americana… based on an Iggy-type persona. The title, of course, was a clumsy pun upon Jean Genet.”

After returning from the Californian leg of the Ziggy Stardust tour, Cyrinda Foxe found out that she had become pregnant with Bowie’s child. However, she later had an abortion.

At around the same time as her fling with Bowie, in 1973 she became heavily involved with the 23-year-old New York Dolls frontman, David Johansen. Sylvain Sylvain recalls, “When David Johansen first saw her at Max’s Kansas City, he wanted her so “BAD” that he wrote the song “Looking For A Kiss.” It didn’t take long for their romance to sparkle. They became the superstar couple of the Manhattan rock scene.”

At this time, the New York Dolls and Aerosmith had the same band manager and would constantly cross paths. As a result of her relationship with Johansen, Cyrinda was introduced to Aerosmith and became close friends with Joe and Elyssa Perry. Through this friendship, she met Steven Tyler and began to feel an attraction towards him.

Despite the growing feelings towards Steven Tyler, she married David Johansen in 1977. In the same year, Cyrinda Foxe had her first film break, featuring in Andy Warhol’s Bad.

Her attraction towards Steven Tyler was unforgiving and in the autumn of 1977, she and David Johansen called it quits. Steven was madly in love with Cyrinda and it wasn’t long until the couple got married in 1978.

On December 22, 1978, Cyrinda Foxe gave birth to a baby girl. The couple named her Mia Tyler. After the birth of Mia, the pair’s marriage began to take its toll. Their relationship was blighted with heavy drug use and addiction, extramarital affairs, as well as physical and emotional abuse.

Many in the music world began to predict a similar demise for Steven Tyler to that of other famous musicians like Jim Morrison, Janis Joplin, and Keith Moon. In 1987 shortly before Aerosmith’s late 80’s comeback, Cyrinda Foxe and Steven Tyler divorced.

In 2001, Cyrinda Foxe had a stroke which left her partially paralyzed. Struggling financially from medical costs, her former lovers Steven Tyler and David Bowie came together and helped support her.

On August 28, 2002, for the third and final time, she got married to Keith Waa in a private bedside ceremony at the Gramercy Park Hotel, funded by Tyler. Unfortunately, on September 7, 2002, Cyrinda Foxe passed away aged 50 from an inoperable brain tumor.

Among others, Steven Tyler and his two daughters, Mia and Liv, attended the funeral.