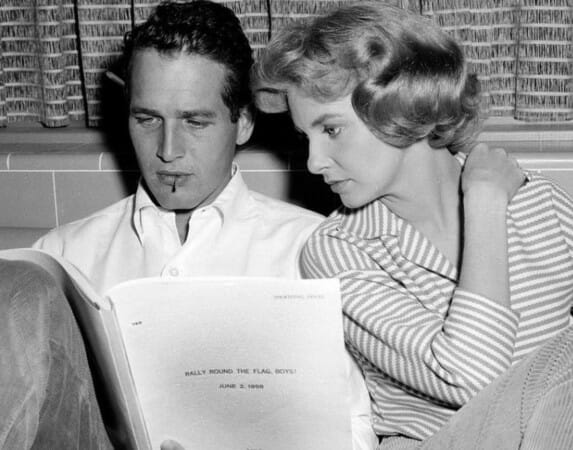 Jackie Witte, the tall, dark-eyed blonde that not many knew as Paul Newman’s first wife…

We all know about Paul Newman’s marriage to Joanne Woodward. The actor, producer, director, philanthropist, and race car driver was married to Joanne for five decades and they were popularly known as the “golden couple” of Hollywood.

As a matter of fact, he is famously remembered for one specific interview. When asked if he would ever consider cheating on his wife, he replied saying there’s no need to go looking for a hamburger when he already has steak at home.

His wife Joanne Woodward was obviously the steak he was referring to in the interview but she wasn’t the only steak he had. There was another woman much before her, and her name was Jackie Witte. This “secret marriage life” of Newman was uncovered by the British news media.

Who Is Paul Newman’s First Wife?

Jacqueline ‘Jackie’ Witte (McDonald) was Paul Newman’s first wife. She was born in September 1929. The pair were married for nine years from 1949 to 1958. They had three children together; Scott Newman, Susan Kendall Newman, and Stephanie Newman. The couple married long before Newman became a household name.

Jackie was a tall blonde woman with dark eyes. Following the years after World War II, she was an aspiring actor just like her future husband. Jackie was just 19 when she met 24-year-old Newman, a Navy veteran.

At that time, she hadn’t even graduated from college. In 1949, they were both living in a small town and met when they were doing summer stage work.

Within a few months, they moved to work at a Woodstock theatre company in Illinois. By December 27, 1949, Paul Newman and Jackie Witte were married, becoming the first Mrs. Newman.

In 1950, they had their first child together, a son called Scott Newman. Sadly his life was cut short in November 1978 when he died from a substance overdose.

In 1953, the couple had their second child, Susan Newman, and 1 year later their third and final child together, Stephanie Kendall Newman in 1954.

There have been a lot of theories suggesting what drove the two to marry so quickly. A popular guess is a pregnancy, but their first child was born long after their marriage. It is generally assumed they were just two young people with the same goals and madly in love.

When Jackie Witte became pregnant with their first child Scott, it seemed as though her husband had to give up theatre. It was around the same time that her father-in-law died, forcing them to move to Cleveland to help run the family business.

During that time, New York was just a short distance away. With her acting career put on hold, Jackie Witte would travel to the city by train, looking for work as a model. In which she did eventually become a full-time model.

However, she became pregnant with her second child just when her husband decided to drop out of Yale University, where he was studying for a master’s degree in theatre.

Newman had decided to give himself one more year of pursuing acting before he would call it quits. But it was difficult for Jackie Witte with Newman away all the time, especially as she was expecting their second child.

Things turned sour with their marriage when her husband finally landed a leading role for the movie Picnic, alongside actress and model, Joanne Woodward. Her two-year-old son Scott was constantly throwing temper tantrums and she had to take care of two small children all by herself.

Meanwhile, her husband was away for days and nights in Manhattan schmoozing, partying, looking for work, and acting. It was only understandable that she started to grow resentful towards him. Along with this, Newman was attracted to the young 22-year-old Southern beauty co-star.

Constantly stressed and busy raising three children, it didn’t take long for Jackie Witte to lose interest in acting. Which caused a major rift in their marriage as acting was everything to Newman.

A friend remembers noticing their relationship moving in different ways. “Her nature is shy and retiring, while Paul’s is gregarious. He likes late gatherings of writers and actors, as did Joanne. Paul and Joanne were two highly attractive people with a deep mutual interest and an obvious feeling of companionship. But you seldom saw Jackie.”

Paul was more and more absent from her life which led Jackie Witte to become suspicious, and for good reason. Her husband was spending most of his time in the company of another woman, Joanne Woodward. Nonetheless, they stayed married and seemed happy, at least on the surface.

Paul’s Hollywood film Somebody Up There Like Me turned out to be a critical hit. From there on, his career would skyrocket. While sadly, their marriage headed in the opposite direction.

When Paul finally acknowledged to Jackie Witte that he was in love with another woman, Witte didn’t let go easily. She felt she had a right to her husband’s flourishing career and their family.

The sad truth was that they married too young and had grown into two completely different people over the years. Irrespective of her resistance, Paul had set his mind on leaving her.

As his relationship with Joanne Woodward became more and more public, he eventually worked up the courage to ask Jackie Witte for a divorce.

Despite the ongoing humiliation happening in the public eye, Jackie refused to sign the divorce papers. It wasn’t until new events forced her hand. Word got out that Joanne was pregnant with Newman’s baby, becoming the last straw in Jackie’s resistance to their separation.

Their divorce went through and as they say, the rest is history. Jackie Witte remained as one of the most mysterious aspects of Newman’s life. Newman may be considered as one of the most loyal celebrity husbands in Hollywood, to Joanne Woodward, but it was built at the expense of another woman’s betrayal.

When confronted, Newman was always cautious around questions regarding his first marriage to Jackie Witte. When forced, he’d often say, “I was probably too immature to make a success of my first marriage” or “What happened to us during that period is nobody’s business.”

Eventually, he did confess to being “guilty as hell” and confessed that, “I’ll carry it with me for the rest of my life.”

Did Jackie Witte Ever Remarry?

Jackie Witte completely removed herself from the public eye following her divorce from Paul Newman. She reported led a quiet life and keep her personal details to herself – including any information surrounding whether or not she remarried.

No, Jackie Witte reported passed away in 1993 aged 64. Much like the rest of her life details following her marriage to Paul Newman, the cause and place of death have been kept private with no public obituary posted.