Elisabeth Shue: The Complete Story of the Dazzling Actress 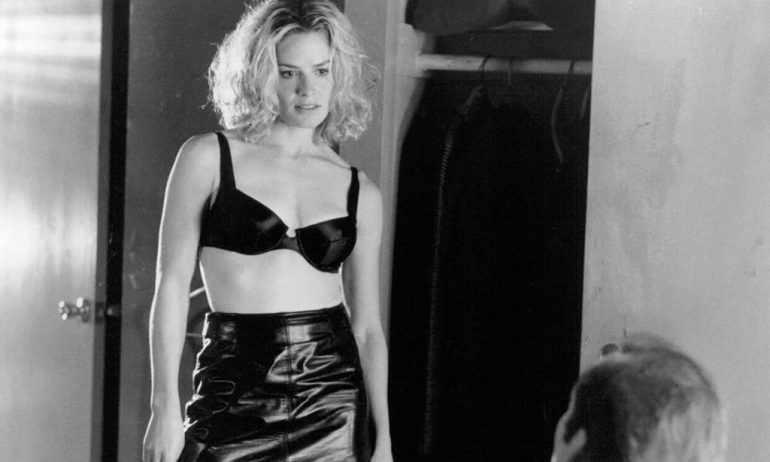 Elisabeth Shue was always destined for big things, but nobody quite predicted the path her career would eventually follow.

She was born to a prosperous family in Wilmington, Delaware in 1963. Her father had once been a congressional candidate. But worked as a real estate developer and president of the International Food and Beverage Corporation.

Her mother, meanwhile, was vice president of a private bank. So it’s safe to say she came from a comfortable background.

However, Elisabeth’s parents divorced when she was nine. She was raised along with her three brothers in the suburb of Maplewood, New Jersey. Here, she took an active interest in sport, playing soccer and tennis.

In many ways, sport has influenced her career choices, and the appearances she has made as an actress. On graduating from high school, she began her studies at the prestigious Wellesley College before transferring to Harvard University in 1985 to study political science.

During her time at university, she had begun to make appearances in commercials, as well as bit-parts in various TV movies under the name “Lisa Shue.” She had evidently been bitten by the acting bug, and eventually dropped out of Harvard entirely to pursue her career on the big screen.

Elisabeth’s first appearances were in commercials while she was still in high school, showing up in ads for Burger King and Hellmann’s Mayonnaise, among others. But it wasn’t long before she progressed to appearances in full-scale TV dramas.

One notable early appearance was in a cheesy TV movie called The Royal Romance of Charles and Diana in 1982. Her name appeared in the credits alongside such luminaries as Oscar winners Olivia de Havilland and Ray Milland.

Elisabeth Shue’s big break came in 1984, at the age of 21, when she starred as the main love interest in the smash hit movie The Karate Kid. It was her successful audition for the role of Ali Mills which prompted her to drop out of Harvard. Even today she has reflected on just how starstruck she was by the experience, and by the star Ralph Macchio.

The success of The Karate Kid turned Elisabeth into a full-time actress, and she made many other screen appearances throughout the 1980s. Of these, one of the most notable is Cocktail, where she again played the love interest of the male lead. She also had great success with her first starring role, Adventures in Babysitting, in 1987.

Indeed, the “girl next door” stereotype was one that could be readily applied to Elisabeth in these early roles. Even in a horror movie like 1987’s Link, where she is terrorized by a malevolent chimpanzee, she managed to convey a certain wholesome image.

Elisabeth Shue Back to the Future

In 1989 she assumed the role of Jennifer Parker in Back to the Future Part II, a part which had previously been played by Claudia Wells in the original movie. As this sequel was filmed back-to-back with Part III, she appeared in that as well. Yet again, this was the role of a primary love interest, playing the girlfriend of hero Marty McFly.

But tragedy struck during the filming of the Back to the Future sequels when Elisabeth’s brother, William, was killed in an accident whilst on vacation. This caused Elisabeth Shue to scale back her appearances for a little while and caused the role of Jennifer Parker to be somewhat reduced.

All the same, Elisabeth enjoyed great commercial success with these movies, even though she had been effectively typecast to a certain kind of role.

For the next few years, she continued to make appearances in frothy, lightweight comedies like The Marrying Man, Soapdish and Heart and Souls, alongside such A-list stars as Robert Downey Jr., Sally Field, Alec Baldwin, and Kim Basinger.

But she also dabbled successfully in the world of live theater, appearing on Broadway in the plays Some American Abroad and Birth and After Birth.

In her personal life, Elisabeth Shue experienced a notable upheaval in 1994 when she married successful director Davis Guggenheim. At that point, Guggenheim was carving out a successful career for himself in television, directing episodes of shows such as NYPD Blue and ER.

But he has since branched out into documentary features, directing the climate change-themed movie An Inconvenient Truth featuring Al Gore. It won the Academy Award for Best Documentary Feature in 2007.

Elisabeth had her biggest critical success in 1995, playing distinctly against type in a scene-stealing turn as a lovestruck prostitute in the movie Leaving Las Vegas, alongside Nicolas Cage. The role earned her an Academy Award nomination for best actress, as well as BAFTA, SAG and Golden Globe nominations in the same category.

In addition, she won the Independent Spirit Award for best actress, as well as a prize from the National Board of Review.

Not Just “The Girl Next Door”

The accolades propelled her career to new heights and enabled her to diversify in her choice of projects.

These included the dystopian The Trigger Effect in 1996, the Woody Allen meta-comedy Deconstructing Harry, Palmetto, where she was able to flex her acting muscles as a noirish femme fatale alongside Woody Harrelson, and the period drama Cousin Bette alongside Oscar winner Jessica Lange.

In 1997, Elisabeth Shue gave birth to her first child, Miles William. She and her husband Davis would go on to have two more children together; Stella Street, born in 2001, and Agnes Charles, born in 2006.

Elisabeth is a great role model for working mothers, balancing her family life with a thriving career. Amazingly, in 2000 she also returned to college to complete her undergraduate studies. She finally achieved a degree in political science which she abandoned back in 1985.

“I knew I wanted to go back, before I had too many more kids,” she says. “And I just knew the longer I waited, the less chance there was I was ever going to finish my degree. It felt like a good time to take a break.”

Two of Elisabeth’s biggest box-office successes during this decade were The Saint, an action blockbuster starring Val Kilmer and Hollow Man, a sci-fi horror movie starring Kevin Bacon, which was released in 2000. Directed by maverick auteur Paul Verhoeven, Hollow Man is notable for its cutting edge special effects, which received an Oscar nomination.

But Elisabeth Shue also showed her versatility in certain smaller-scale projects throughout this period, taking the lead role in a number of independent projects.

Of these, perhaps the most notable is Molly (1999). A sort-of remake of the 1968 movie Charly wherein Elisabeth plays the titular Molly, an autistic young woman who undergoes pioneering brain surgery to “cure” her autism.

Though the film was both a critical and commercial failure, it showcased Elisabeth’s acting skill and her willingness to take creative risks.

As the twenty-first century dawned, Elisabeth continued her winning streak, albeit in smaller-scale films. The horror movie Hide and Seek saw her playing opposite Robert De Niro. She later admitted he was the main reason she signed on to the psychological drama.

“I was very fortunate to get to know him. There was definitely a great deal of respect for him, and at times, I was in awe. But there was no intimidation, and I was quite surprised as to how comical he was on the set.”

Interestingly, Elisabeth Shue has named the 2001 TV movie Oprah Winfrey Presents: Amy and Isabelle as one of her all-time favorite roles.

In the event, the finished article was a sweetly nostalgic tribute to Elisabeth’s own upbringing in New Jersey, with a particular focus on her interest in soccer. Like Elisabeth herself, the central character, Gracie, finds herself the only girl on a youth soccer team.

The film has many parallels with Elisabeth’s own life, and she herself appears as the main character’s mother. This film is clearly a labor of love for those involved. The finished project is a low-key but affectionate sleeper hit.

All the same, Elisabeth Shue could still pull out all the stops in a big summer blockbuster when the occasion demanded it. This was shown by her starring role as the sheriff in the hit summer movie Piranha, which reunited her with Back to the Future co-star Christopher Lloyd. An unashamedly schlocky b-movie, Piranha is also a heck of a lot of fun and was warmly received by critics.

2012 was a big year for Elisabeth, as she starred in a number of movies including the box-office horror hit The House At The End Of The Street alongside Jennifer Lawrence and Hope Springs alongside Tommy Lee Jones and Meryl Streep, but she also segued effectively into TV.

She took on a regular role in season 12 of the smash hit show CSI: Crime Scene Investigation, replacing series stalwart Marg Helgenberger. Her role as volatile blood spatter specialist Julie Finlay lasted through to the season 15 finale, where she was summarily killed off.

But Elisabeth’s career shows no sign of slowing down. In 2019 she appeared as a series regular in the record-breaking Amazon Original series The Boys and has recently wrapped filming on a war movie starring Tom Hanks titled Greyhound. Greyhound is slated for a 2020 release.

But whatever the role and whatever the project, Elisabeth Shue’s presence is always a mark of class and style. She has delivered consistent quality performances for nearly 40 years and brings an understated grace and conviction to every role she plays.

Hopefully, Elisabeth Shue will continue to do so for many years to come.

“There were times when I was not as wise, when setbacks would make me feel emotional, I used to sit there and think ‘I’m better than this, I can do better, why has this happened to me?’ But life isn’t like that, it’s about continuing the road you’re on and blessing the journey.”