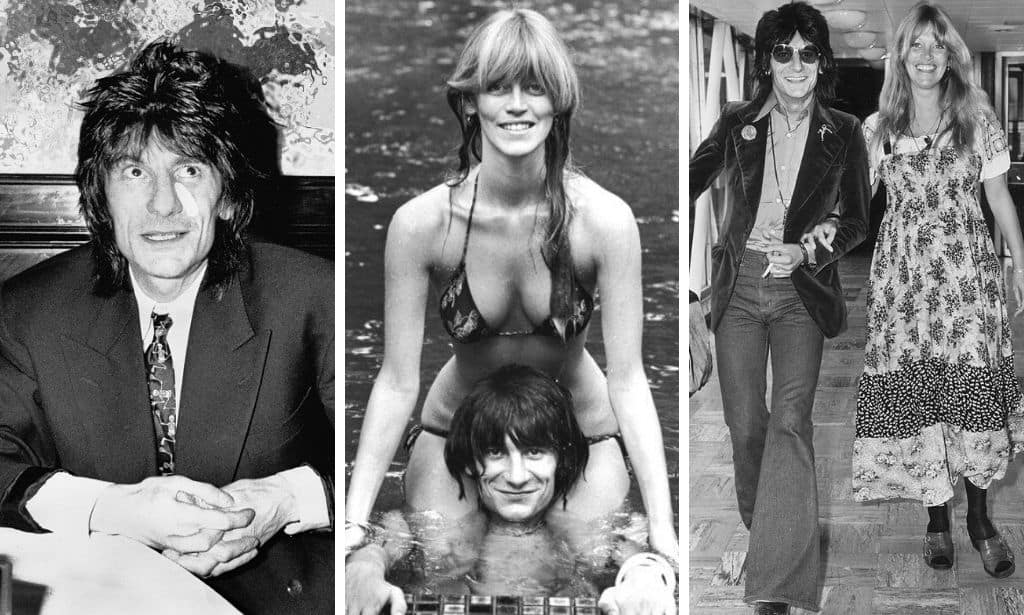 Krissy Findlay: In the Heart of a Love Polygon

Krissy Findlay was a groupie extraordinaire, having affairs with Eric Clapton, George Harrison, John Lennon, and Jimmy Page before marrying Ronnie Wood and becoming Krissy Wood. Not many rock chicks could brag to that extent or even get anywhere close.

Born as Krissy Findlay into a strict Roman Catholic family on March 17th, 1948, her path to groupie stardom seemed set in the stars when she claimed she lost her virginity to rock god Eric Clapton on her mother’s couch in Ealing, UK.

She was a student at Gregg Grammar school in Ealing where she developed her love for live music and dancing. In 1964 aged just 16, she met her future husband Ronnie Wood. At the time, Ronnie was the guitarist of the Small Faces. By 1971, the couple was married.

In Ronnie Wood’s autobiography titled Ronnie, he remembers meeting Krissy Findlay at one of Eric Clapton’s shows. “Somehow, Krissy became my girl, and Eric used to remind me of that whenever we met. ‘You pinched my bird, Woody.’ Krissy was my girl and I knew she was special, but I can’t pretend she was the only one.”

Krissy Findlay was a tall, slender, blonde and something of exquisite beauty. It’s not hard to believe she began a successful modeling career during the 1970s.

Rumor has it that if it wasn’t for Krissy Wood bringing Keith Richards home after a night out partying in a London club, then Wood wouldn’t have been invited to join the Rolling Stones in 1974. With Ronnie now in one of the most popular bands at the time, their lifestyles became more rock ‘n’ roll by the day.

With the money starting to flow in, Ronnie bought an extravagant home in Richmond which hosted all kinds of debauchery. Along with this, Ronnie and Krissy Wood began having extramarital affairs, most of them with their rock ‘n’ roll cohorts.

Ronnie writes in his autobiography. “Krissy had a short fling with George, they holidayed in Portugal. Remember, I’d pinched Krissy from Eric, and later, after Pattie and Eric split up, I had a lovely thing going with Pattie. We loved to go to Paradise Island on many occasions, where Sam Clapp gave us his home and hospitality.”

He continues. “So Eric and I have always had this kind of sparring thing about girls we’ve known, and if you look at it sort of like a jigsaw puzzle you can see how our lives have been fit together over the years.”

Krissy Wood flew off to a villa in Portugal with Beatles lead guitarist George Harrison, under the abiding approval of her husband. Unknowingly, her approval was only given because he was planning to jet off to Barbados with Harrison’s wife, the model Pattie Boyd.

Ronnie recounts the series of events in his autobiography.

“Back in England in 1973, my relationship with Krissy was on its last legs. Our relationship had spiraled into a sort of warped rockstar wife swap with emotions involved. Prior to meeting Jo [his second wife], I had a fiery and heartfelt affair with George Harrison’s wife, Pattie Boyd.”

“One night at George’s house, Friar Park, in Henley I took George aside and told him quite seriously that when it was time for bed I would be going to Pattie’s room. Seemingly unflustered he pointed to the room Krissy and I were staying in and added, ‘I shall be sleeping there.”

“When the time came, the two of us were left on the landing, hands-on knobs (doorknobs) of the respective rooms. ‘Are we going to do this?’ I asked. ‘I’ll see you in court,’ George replied and in we went. Pattie was a little surprised to see me. I told her I thought she was seriously neglected, was going to waste and unleashed that I felt so strongly for her.”

“The following morning we were woken by George, who informed me that he had called his lawyers. He never actually did. Pattie and I headed off to the Bahamas and Krissy and George left for Portugal.”

“Whenever I went to Friar Park, my man George would always greet me at the door singing with his ukulele: ‘Funny little fellow – wears his sister’s clothes – don’t know what to call him, but I think he’s one of those.’ Ringo and I would always laugh with affection.”

Here’s what Pattie remembers about it. “In the midst of all this, we had a call from Ronnie Wood. He was on tour and said he might come to see us for a few days. It was such a relief to have someone else to party with, someone who is light and fun, who enjoyed life and didn’t need looking after.

“He didn’t seem upset that his wife was with George – just thought it was funny that they’d gone to see Salvador Dali. Ronnie was, and is, the most adorable man.”

Upon their return to England, Krissy Wood and George Harrison were apparently madly in love. They met with their corresponding spouses at Harrison’s home in Oxfordshire. Unfortunately what happened when the couples revealed their holiday romances remains unclear to this day.

Shortly after, Krissy Wood visited Los Angeles where she started having an affair with John Lennon, who was married to Yoko Ono at the time. The affair didn’t last long, with Lennon apparently continuously confusing her with Harrison’s wife and calling her ‘Pattie.’

Krissy traveled to New York to rekindle her love with Ronnie Wood. In New York City, she met Led Zeppelin lead guitarist Jimmy Page and the pair became friends. The three of them flew back to England together. Back in England, Ronnie and Krissy Wood would frequent Page’s home in Sussex.

After a heavy evening of drinking, Krissy woke up next to Page, according to her believing it was her husband. Page’s then-girlfriend Charlotte Martin discovered them in the morning together. The next day, Page left Charlotte and he and Krissy lived with each other for a year.

After a year of living with Jimmy Page, Ronnie and Krissy Wood reunited. On October 30, 1976, Krissy gave birth to their son Jesse Wood. Soon after the birth of Jesse, Ronnie divorced Krissy Wood after meeting his future wife Jo Howard.

Like most of these rock ‘n’ roll love affairs, Ronnie promised to look after and support Krissy Wood and her son Jesse whilst continuing his escapades.

Sadly, Ronnie’s support began to ease up over the years until he eventually slashed all payments. On June 11th, 2005, Krissy Findlay was found dead on the sofa at a friend’s house from an accidental Valium overdose, prescribed for her depression. She was living in virtual poverty at the time, apparently seeking a job in a supermarket.